On our last pilgrimage to Athos I posted these pictures in 1749, a few minutes after the fire was extinguished. Here is whole story and more pictures.

After arriving at the kellion of Father Nikon and Eugenios at 14.50 h. we received a warm welcome and we were invited to have a fine lunch.

After lunch we sat down under a lovely small ‘kiosk’, surrounded by vines, to have a smoke. 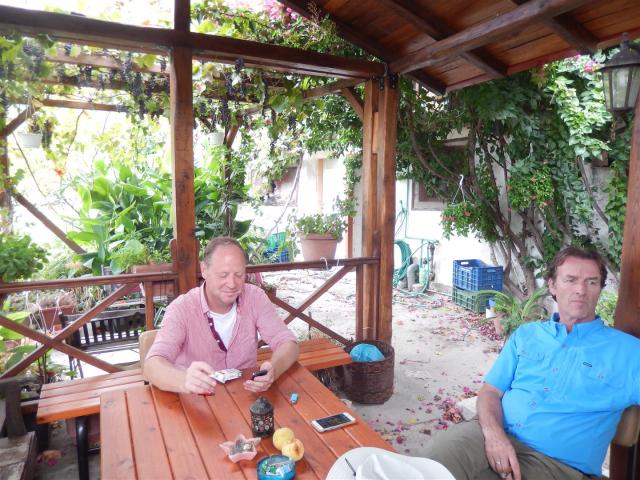 I was a cloudy day. I went out the have look around and on 14.57 h. I took this picture of Nea Skiti, not knowing that the low clouds above the houses and trees were actually something else…. 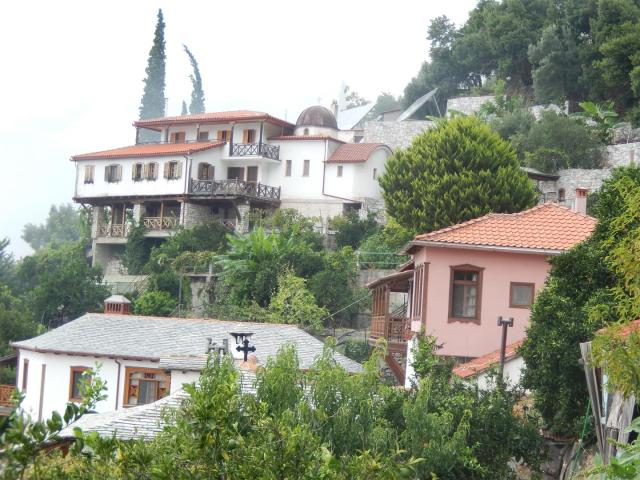 We heared shouting and our archondaris, a friendly young guy from Athens, ran out to see what was going on.

We asked: ‘can we help?’ and he shouted ‘no, no”, but we left the premises and ran after him. Soon we realized that there were no low clouds drifting by, but it was smoke from a fire (15.01 h.)

Many monks and people were already busy trying to extinguish the fire, that was burning in a small hut. Fire hoses were rolled out and everybody tried to help. The victim of the fire was a more than 80 year old monk called Raphael, who lived alone in his hut. We were told that many monks did warn him to leave his house because of his age and join another kellion in the skete, but he refused to move. Monks were afraid that something might go wrong when he kept on living alone, lighting the candles every day…. 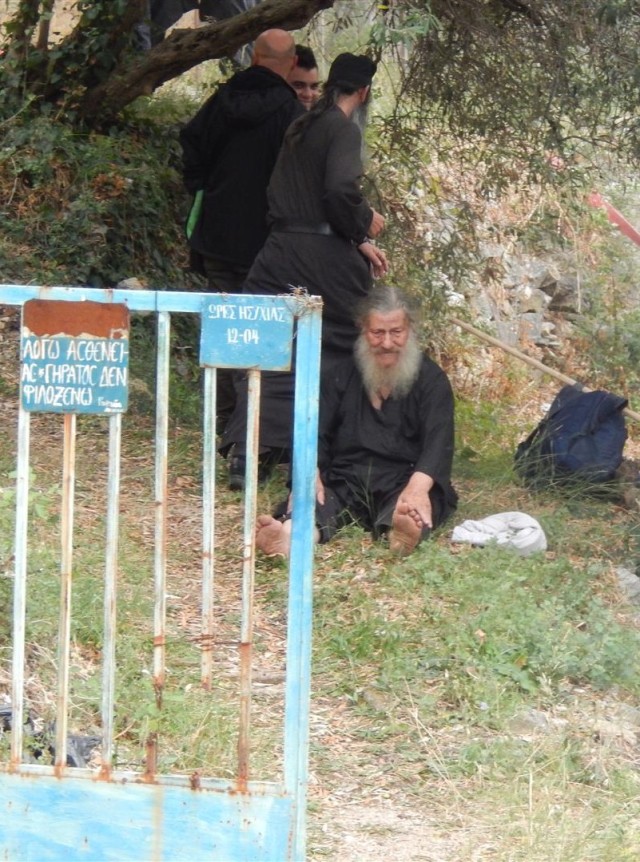 Monk Raphael sitting in his garden, in shock. Luckily he was not seriously harmed, but he was very sad and had to cry. It was heartbreaking to see. in the meanwhile the others tried to get control over the fire. As it showed out one of the pilgrims was a professional fireman, so he gave instructions.

A pilgrim from Germany was a doctor and he took care of father Raphael (15.26 h.). 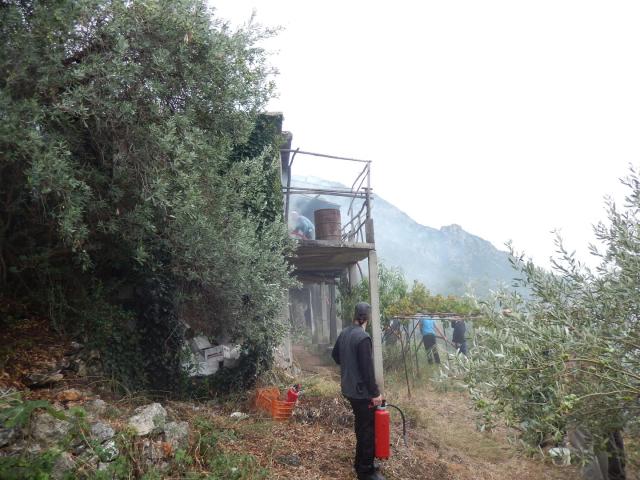 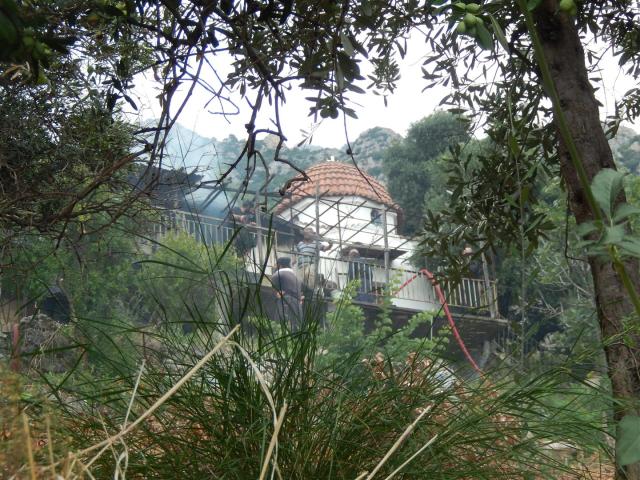 The chapel of the kellion looks to be spared from the fire.

The skete of Nea Skiti is well equipped with fire fighting equipment. Five years ago another building burnt down and after that they installed the fire services. 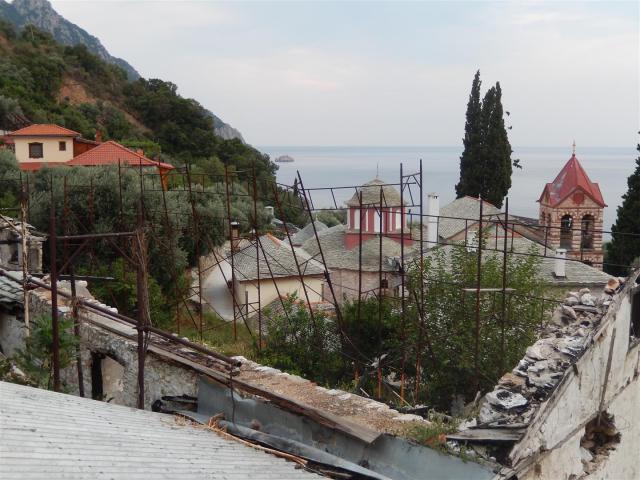 The two pictures above: the burned house from five years ago in Nea Skiti

The only thing about this fire incident is that the equipment was not tested properly every now and then, because the fire hoses came loose more then once, probably because of the high water presure. It may be a good idea to keep a fire drill once a year? 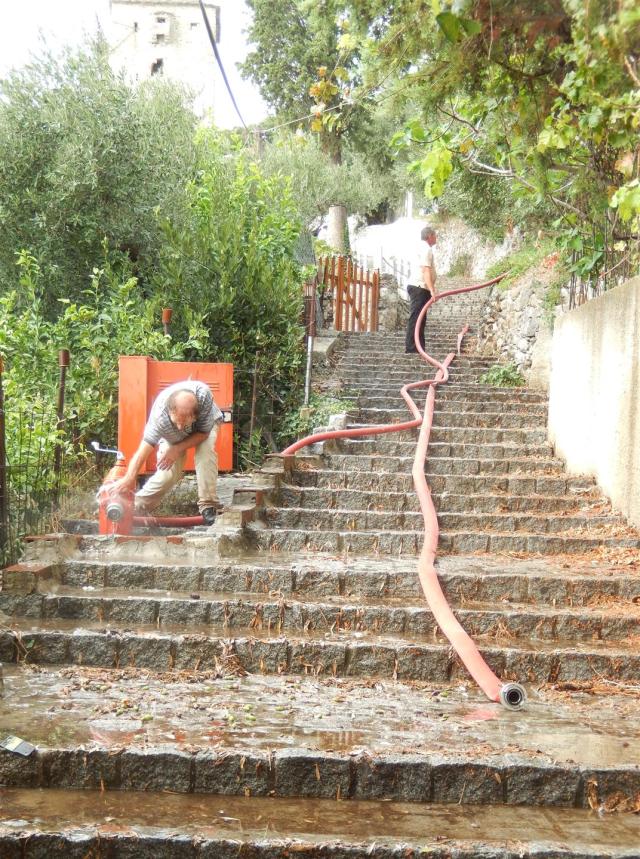 The red spot in the middle showes the hut that was burned in September this year, the arrow right shows the spot where the fire took place five years ago.