The morning started with my coronation as king of snoring. It is surprising to have a won a prize without any awareness. Pilgrim Herman went to the monastic kitchen to find some food to bring along. He came back empty handed. There was nobody there. All the monks were in the church. Right they are. So we decided to go without breakfast. We had a long day ahead of us and we had plenty of provisions. And a long walk to come. We didn’t want to wait too long for the service to finish and waste precious daylight walking time.

Our Bulgarian friends were already sitting, chatting and smoking on the benches just outside the monastery. They looked remarkably untouched by the night before. We waved goodbye as old friends and they wished us a save journey.

It was a cloudy, quiet, morning in the enclosed wooded valley dotted with cypresses where Zografou is situated. 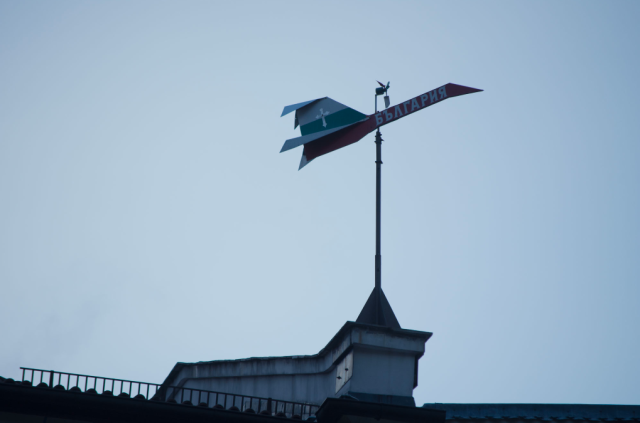 On the roof of the monastery the wind vane looks like a folded paper plane. On the body a propeller as if to push the plane forward. The aircraft is painted in the colours of the national flag; white, green and red. The text says: Bulgaria, so I learned from a transcription I made. Bulgaria moves flexible to all directions.

From the dormitories the path to Chilandariou circles back. There is a valley between the path and the monastery. All along the path a long stone wall has been erected. It is laid out in an modern design with horizontal accents. Designed with a double layer of slates as coal strata. The function of the wall is not very clear to me but at least it works as a colossal frame for two more than life size mosaics. They are newly made in the traditional way; open air icons. The blues of the tiny stones reach an amazing intensity.

Zografou, meaning: monastery of the painter, is dedicated to St. George (23rd of April). The story of the foundation tells that the three founders of the monastery (Moses, Aaron and John) could not decide about the dedication. Would it be the Virgin, St. Nicolas or St George? They locked a wooden panel in the church and fell into prayer outside. After praying for a long time they agreed to go in and found the panel miraculously painted with St George’s picture. This is how the monastery was dedicated to St George and was called Zographou: of the painter. (Thanks to the combined knowledge of Sydney Loch, J.J. Norwich and Herman Voogd).

Then we walked a bit further where the monastery of Zografou finally reveals herself in all her austere splendour. Although more than a thousand years since its foundation, named for the first time in 1049 in a document, the buildings, are not very old to Athonian standards. The two churches are dated 1764 and 1801 and all else is from a later date according to J.J. Norwich. 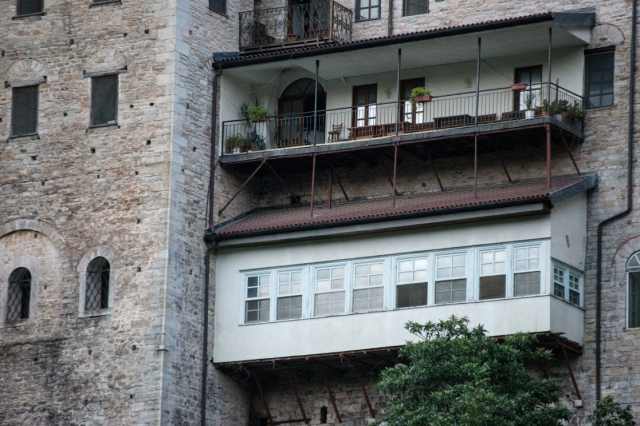 Some details of the balconies and verandas along a defence tower. The wonderful Athonian combination of being save behind thick walls and the possibility to enjoy outdoor, nature and the view from a birds eye point of view.

This entry was posted in 09 Sografou, trip 2015 and tagged Bulgaria, icons. Bookmark the permalink.