Mount Athos is one of the most peaceful places on earth. The turmoil of violent attacks or even war feels far away from the monasteries and the paths that connect them. The brutal outer macrocosm, its violent conflicts and worldly affairs seem to vanish in the unity of belief, the quiet eternal rituals of the monks and the peaceful landscape. But even the Athonian life is sometimes touched by the big historic events outside the peninsula. 99 Years ago monks from Zografou, who are Bulgarian, and monks from Chilandariou, who are Serbs, had a fight using their fists, brooms and sticks. It was in the middle of the Great War. This day we would walk in the footsteps of those monks 99 years ago. We would walk the path between the Bulgarian and the Serbian monastery. The path they must have walked to have their ungraceful meeting.

The picture shows the fight between the Slavonic neighbours and brothers. A monastic echo of the Bulgarian choice to join the Central Powers in the Great War and declare war against Serbia on 14th of October 1915. In this way Athos is “reflecting, and sometimes even anticipating the delicate power dynamics of the outer macrocosm”’, Veronica writes eloquently. Unfortunately I could not find any information about the course of the fight, nor about possible casualties.

It was six years ago that we roamed the same monopati, the other way round. Back then we arrived at a gloomy crossroad in a densely forested area with a strange sign. We followed the sign and we discovered a cave, which belonged to saint Cosmas as Graham Speake explained later. It was one of those magical experiences and discoveries on the Holy Mountain.

Revisiting the crossroad I felt disappointed. The enclosure was gone. Pilgrim Wim already warned us. A big machine went through the bushes and trees and destroyed the intimacy. The sign itself lay lost somewhere against remaining trees.

Cosmas caves are situated above a valley. And, for the people who know what to expect, can be seen only very briefly from the monopati on the other side of the valley. 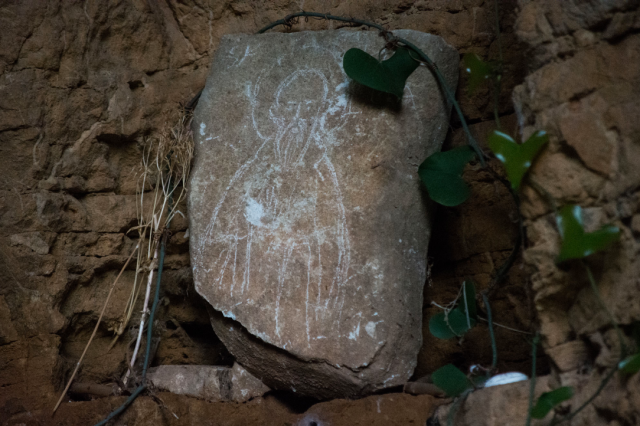 In a small cave at the foot of the bare vertical rocks I found an touching image of Saint Cosmas by an anonymous engraver. A good spot for some meditations.

In the second room of Saint Cosmas cave a new grave was dug out and formed by stones. It is not meant for Cosmas, I suppose; he died a long time ago in 1323. Who will be lying in this grave?

An open cupboard with small icons, sacrifices, coins, paper money, a lighter and some pictures.

Pilgrim Herman coming down the restored stairs and railing. Here it became clear why there was so much destruction on the monopati. They needed trucks for restauration work. A new and safer entrance, some changes in the interior and the grave. In a couple of years the signs of the destruction will vanish and nature will take over once more. I want to go back there when the magic has returned to that mystical and peaceful cave.

Like Loading...
This entry was posted in 09 Sografou, people, trip 2015 and tagged cosma, cosmas, Della Dora, hermit. Bookmark the permalink.