Vatopedi, trapeza, 1981
Photo’s by Frank Horlbeck from an exhibition held in the US (Chazen Museum of Art, Wisconsin) earlier this year which included about fifty digital prints made from a collection of over 20,000 slides and digital images to tell the story of Mount Athos in four distinctive sections: Monks and the Rituals of Daily Life; Sacred Landscape and Monastic Enclosure; Architecture and Sacred Space; and Icons. 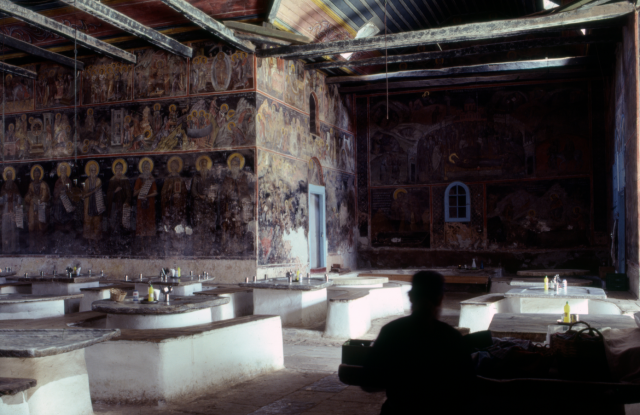 Lavra, trapeza, 1986
Exhibition Text: A monk reverently sits at a table in the dimly lit trapeza (dining hall) of the Lavra, where the T-shaped plan with an apse, curved sigma (C-shaped) tables from the 10th century, and frescoed walls from floor to ceiling deliberately evoke the sacred space of a church interior.

Old kitchens in Lavra , 1968
The photographer, Emeritus Professor of Art History, Frank L. Horlbeck has made documented all aspects of the landscape, architecture and life of the monks during frequent extended visits to the Holy Mountain between the 1970s and 2015. A cell at Dionysiou 1979
A very nice image, read here the exhibition text. 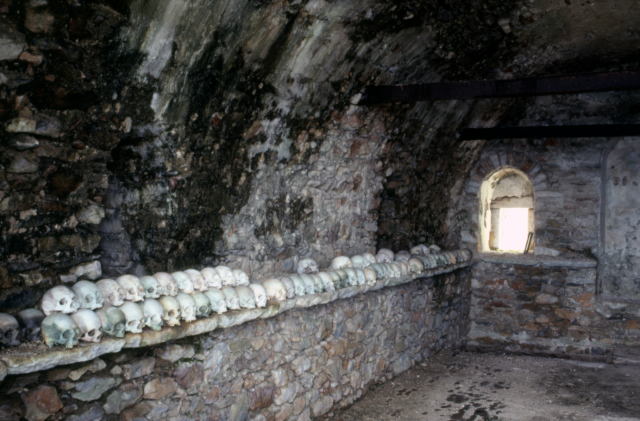 Skulls in the ossuary of Podromos, 1986 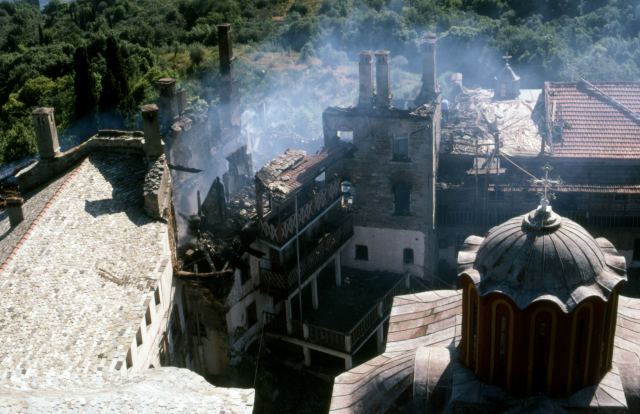 Fire in Karakalou, june 14th 1988. The photographer witnessed a remarkable moment when lightning struck in the night.
Exhibition text: Frank Horlbeck awoke at midnight to the sound of lightning striking the
southeast wing of Karakalou. The following morning he captured the smoke rising from the rubble. The walls of the monastic enclosure appear impenetrable from the outside, but their wooden structure makes them vulnerable to fire. The monastery is centered around the church, shown here in the foreground with a tall dome, while the guest house, refectory, and monastic cells for sleeping and solitary prayer line the perimeter wall.

Chilandariou in 1981
The complete photo collection of the exhibition by Frank Horlbeck you will find here.