In post 1327 I started the review of this book: here I’ll continue with the last three chapters: 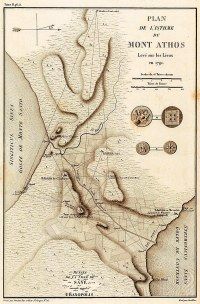 Chapter 4 “Erudite Athos” describes the Western travelers who visited Athos during the last ages. They came for different reasons, such as the search for the Xerxes Canal (in that time the Athos border was near de town of Ierissos, see map above),

for manuscript hunting (Robert Curzon) and for “picturesque” reasons.

Visiting Athos was going to a living museum, travelling back in time, in search of “a lost part of one’s self”. Monasteries were “like palaces of a fairy tale”. Reaching the summit of Mount Athos was an intellectual rather than spiritual challenge, thus conquering the view of “the most remarkable mountains in the world”. Maps were made by Copeland and in 1856 Edward Lear painted the landscapes. He quoted: “Oh Holy Mountain! What have I not suffered to get drawings of you!”

In the next chapter “Geopolitical Athos”, Della Dora tells us about Mount Athos, from the liberation after half a millennium of Ottoman occupation on November 2 1912 (next Friday 100 years ago!), till World War II.

Easter 1913: the first celebration after the liberation from the Turks

From her own collection she shows an image of fights between Bulgarian and Serb monks in 1916 and she tells us how the struggle for “Lebensraum” on Athos had come to an end, after the Russian money, monks and pilgrims no longer outnumbered the Greek from October 1917.

During a short period of time French troops occupied Athos. Their presence was followed by an expedition led by the prominent Byzantinist Millet in 1919, which resulted in the book “Monuments de l’Athos”. 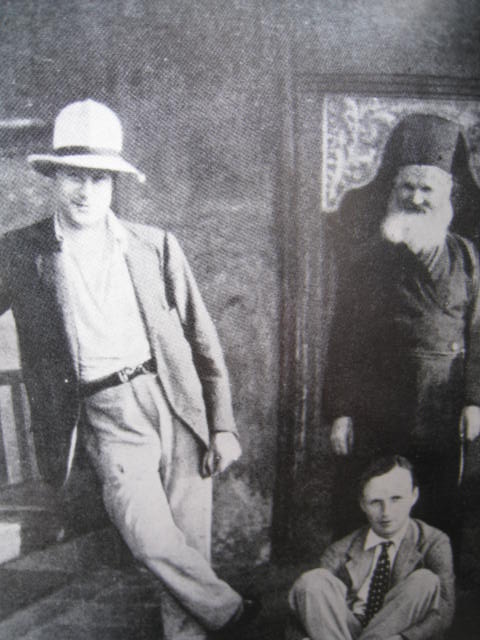 Robert Byron with the guestmaster of Docheiariou

Men like Robert Byron and Ralph Brewster visited Athos in the 1930s and wrote their famous books ‘The Station Athos: Treasures and Men‘ and ‘The 6.000 Beards of Athos‘.

The next scientific expedition was carried out during World War II, when Dölger visited Athos in 1941. The plan to transfer Athos’ treasures to the Reich in autumn 1943 fell through, for reasons which not have been clarified.

The Allied forces had a minor role on Athos during WW II: there is an account of a British submarine that had fuelled at Vatopedi and that had taken onboard some escaping soldiers. The most prominent book about this subject is written by the New Zealander W.B. Thomas in ‘Dare to be Free‘ (1951).

“Despite the German threat that monasteries would be burnt if Allied refugees would be found – a technique applied in many Greek villages – , the monks of Mount Athos continued their philanthropic mission silently”.

Many scientists did visit the Holy Mountain during the ages. The last – short – chapter “Scientific Athos” gives a survey of some of them, starting with taxonomist John Sibthorp, who published the ten-volume folio Flora Graeca in1806-40 and found 450 plant species..

A German etching by Bertuch 1790. The same image appeares in Sibthorps’Flora Greaca 1813 – “Athos in a romantic almost alpine green idyll” 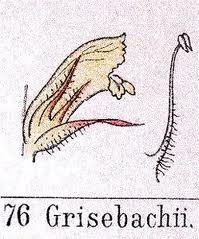 The German botanist August Grisebach, who ventured to Athos in 1839 after reading the eight volume of Flora, said that nowhere in Europe he had seen vegetation as luxuriant as that which existed on the Athonite pensinsula. Gisebachs’ understanding of Athos was not purely scientific: his ascent constituted an overwhelmingly aesthetic and emotional experience. When later in 1937 the botanists Hull and Turill visit Athos and determine 500 specimens, they paid a visit to Xenophontsos monastery:

“Resembling a sixteenth-century cabinet of curiosities or a medieval workshop, Xenophontos’pharmacy was a place that belonged to a remote past, to the world of alchemy and natural wonders”.

A Russian pharmacy on Athos

In his book Black Angels of Athos (1936) Michael Choukas assumed that Athos was to die soon. Seventy years later Choukas’ forebodings had proved wrong, as Graham Speake observes. Since 1977 new recruits have been coming to Athos and over the past decade the trend has been growing exponentially, mainly due to the liberation of former Communist countries.

Speake says: “Athos was once again responding to a need that clearly existed, a need for a radical alternative to the fast-growing, fast-moving secularization of modern society in the outside world”.

In the epilogue Della Dora finishes her book with an overview of all women who managed to visit Athos and she concludes how Athos will remain an object of desire, both material and spiritual:

“Modernity turned Athos into a picturesque fragment of the past between the layers of human history.”

My conclusion is: everybody who’s more then superficial interested in Athos should read this book. It is a must!

This entry was posted in books and tagged Della Dora. Bookmark the permalink.