Not long after the publication of this book in 2011 the publisher asked “Athos-weblog” to write a review. Although I finished reading the book some time ago, I now finally got the chance to share this review with our readers. Let’s start with the book itself: it contains 242 pages with text (including notes: 312) and my first impression is: this book is an absolute must for all Athos fans! For me as a Dutchman it is not an easy book to read and you have to take your time to enjoy and grasp it, because every page of this book contains a lot of (scientific) information. The first remarkable thing about the book is that it is written by a woman, who – ofcourse – never sat foot on Mount Athos. She got her information by reading books and talking to the men who had been there. The title speaks for itself, she can only “imagine what Athos is like”. Veronica Della Dora is one of the few women I know who got hooked on Mount Athos. I believe most women who hear about the existence of this piece of land in Europe, only show some brief interest for a couple of minutes. As soon as they hear they will never get a chance to visit Athos, the interest fades almost immediately. This was not the case with Veronica Della Dora: she made a profound study of Athos and its different aspects. Her book is divided in six main chapters: 1. Mythical, 2. Utopian, 3. Iconic, 4. Erudite, 5. Geopolitical and 6. Scientific Athos. From the introduction by David Lowenthal, who helped her with his expertise and comments, we learn that she is a geographer. This will play an important role in the way she looks at Athos: geography gave the foundation for this book.

In her first chapter “Mythical Athos” we read about Athos before Christianity and how the architect Dinocrates planned to carve a statue of Alexander the Great in the mountain. (foto berg) We see the symbol of the mountain returning in later images of popes and even in the Saint Peter Basilica in the Vatican. Fine and exclusive black and white images complete this chapter. In her pages about the Xerxes Canel I found this fine quote:

“Athos is … a moral landmark on the imaginary boundary between the East and the West”.

Engraving of the digging of the Xerxes chanel – 1693

A lot of artists were inspired by the idea of creating a mountain into the image of Alexander the Great: 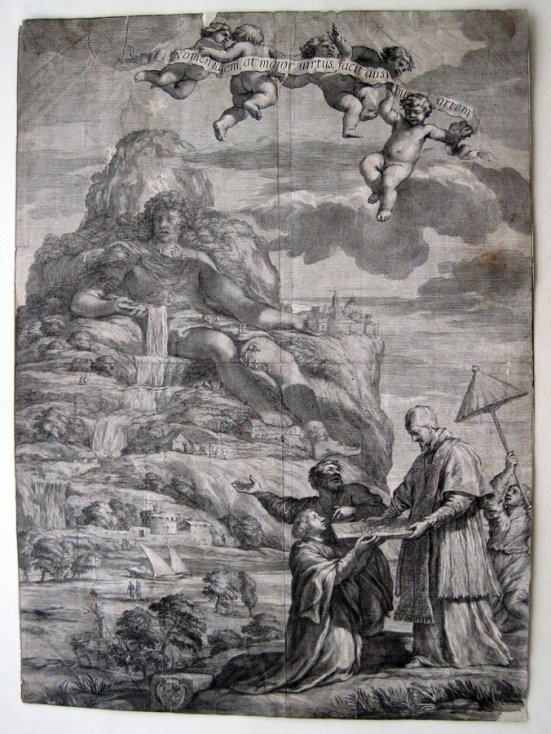 Pietro da Cortona – 1666 (details from this etching see below): Pope Alexander VII identifies himself with Alexander the Great and symbolizes his power with the mountain. 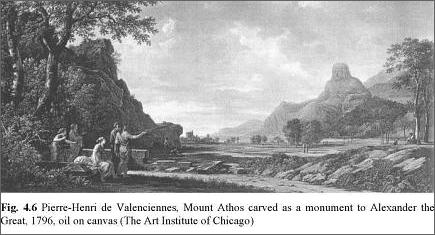 and the original oil painting. 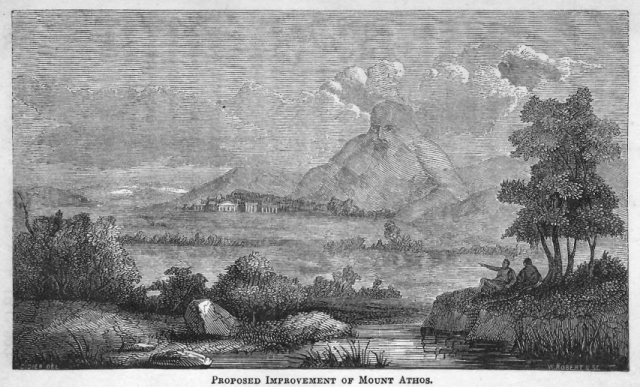 Etching form 1848 with a “proposed improvement of Mount Athos”.

In chapter two named “Utopian Athos” it is stated that already since the year 881 the animals that have been grazing on the peninsula, were repeatedly banned from it (Chrysobul emperor Basil I). This explains the diversity and density of the vegetation on Athos, especially if you compare it with nearby Kassandra and Sithonia. Della Dora describes the ancient geographers and map makers of mount Athos and she compares the ideal landscape of isolated Athos with Thomas More’s island of Utopia. Another interesting quote from the book is this popular motto on Athos:

“If you die before you die, you will not die when you die”. 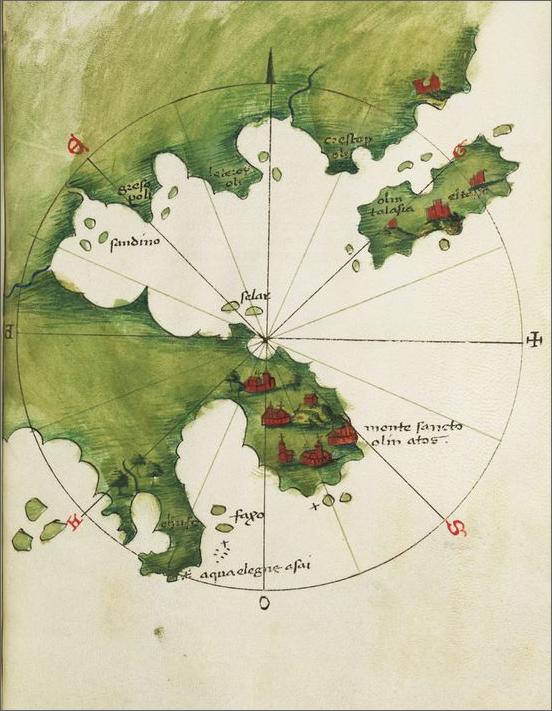 Chapter three is called “Iconic Athos”. Although Athos is not a biblical mountain (like Tabor or Sanai), Della Dora describes how Athos has become the Holy Mountain “par excellence”. Interesting is the explanation of the rise of Idiorithmic monasteries: it helped the monasteries cope with often difficult economic climate during the last three centuries of Ottoman rule. She also describes the first travel guide dated to 1698. In this guide of Ioannes Komnenos called Proskynetarion. He mentions the healing role of Athos’nature and he shows the geography of Athos on an etching. In this chapter the author also pays attention to Romanians and Russians, who leave their traces in the landscape – out of 200 cells and smaller dwellings 90 were Russian in 1902. The first realistic representations of the Athos’ geography appear on maps and postcards. Large hostels are build in metochia (monastic dependencies) in Odessa and Constantinople, to give large numbers of pilgrims a possibility to visit Athos, thus satisfying the spiritual desire to visit Athos. At the same time the images of Athos changed: the representations of Athos no longer needed to be allegorical or symbolic, but the real Athos was portrayed and the slopes were a powerful icon itself. Athos became a sacred “landscape of desire”. In 1859 the Russian collector Sevastianov launched an official mission that lasted 14 months, during which maps were drawn, antiquities and manuscripts purchased, monuments catalogued and several thousand photographs reproduced, like Napoleon did in Egypt a half century earlier.

Athos map by Sevastianov and below postcard from 1873

The most interesting quote from this chapter is:

“while for the Western pilgrim the journey to the place and its hardships are crucial to his “peregrinatio”[mystical jouney], for the Eastern pilgrim what does really matter is the fact of worshipping at the shrine”. This is also called proskynesis – the one who bows before an icon or relics and worships them.

If you want to read a preview from the author herself, look here (“Mapping a Holy Quasi-Island: Mount Athos in Early Renaissance Isolarii”). Look below for her reading about Athos (the first 34 minutes).

This entry was posted in books and tagged Della Dora. Bookmark the permalink.