One of our readers, Jan Paul ten Bruggencate, was so kind to share his experiences and photos from a time that hardly any visitors came to Mt. Athos, because it was not easy for non-orthodox to get a permit. First you had to go to your consulate in Thessaloniki, were you to explain your reasons for a visit (with a letter of recommandation) and the consul had to judge if you were “men of good caracter”, that ment, that you were not hippies. According to Jan Paul only 10 pilgrims – orthodox and non-orthodox – were allowed to enter Athos every day in 1967! 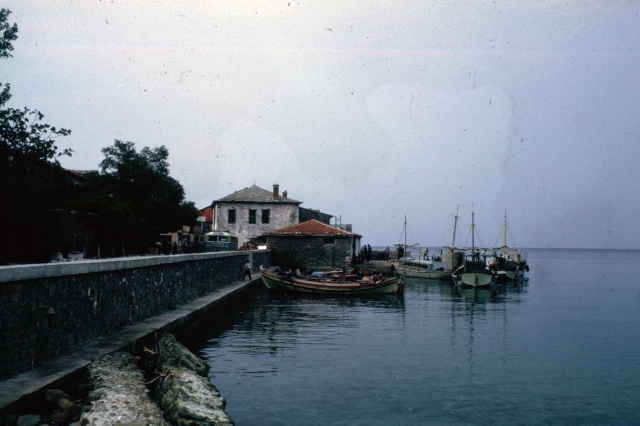 The port of Dafni, with small motorboats, Greek “Kaiks”, still with masts: 17th of August 1967. Look at the old bus on the left.

After handing over a box of Dutch Willem III cigars, things went easy and three letters were given to you, one for the Ministery of Northern Greece (mrs. Kalivapoulou), one for the foreign police and one to join your passport, which you hand over on the boat to Dafni and which was given back in Karyes, together with your Diamoniterion. Mr. ten Bruggencate visited Athos from August 17th to 20th 1967 (a few months after the Colonels’ Coup of 21 April 1967). 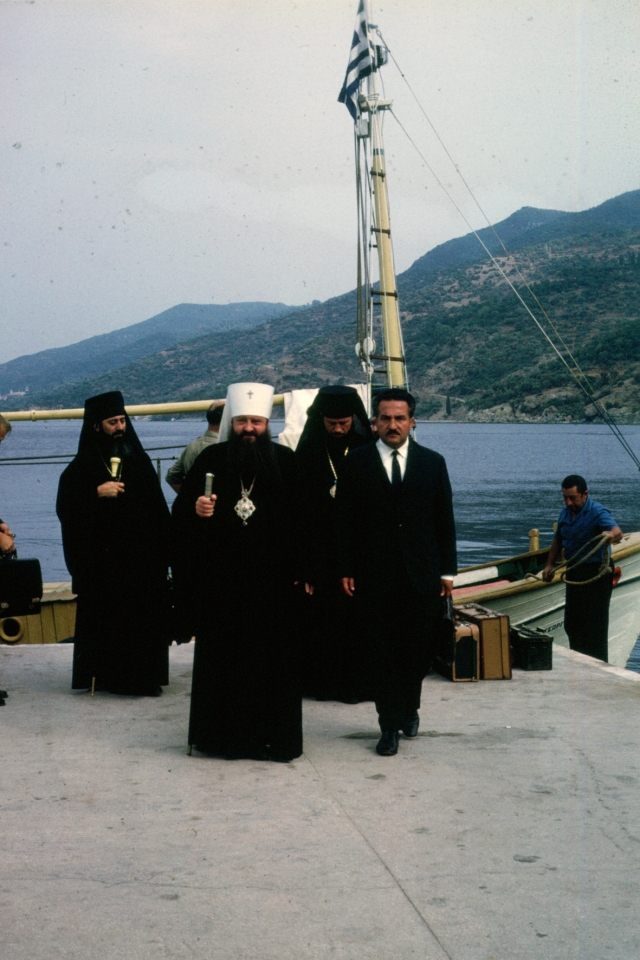 On the pier of Dafni, the Metropolitan of Leningrad, Nikodim, after saying goodbye to the monks of Panteleimonos. The young Metropolitan pleaded in vain to get Russian novices to the Russikon, the Greek generals didn’t allow it. History learns that Nikodim was a KGB agent, working under the codename Adament (source wikipedia). Thirteen years later, in 1980, only 8 monks survived from the 3.000 Russians that once lived in this “grand” monastery, two of them being Greek. 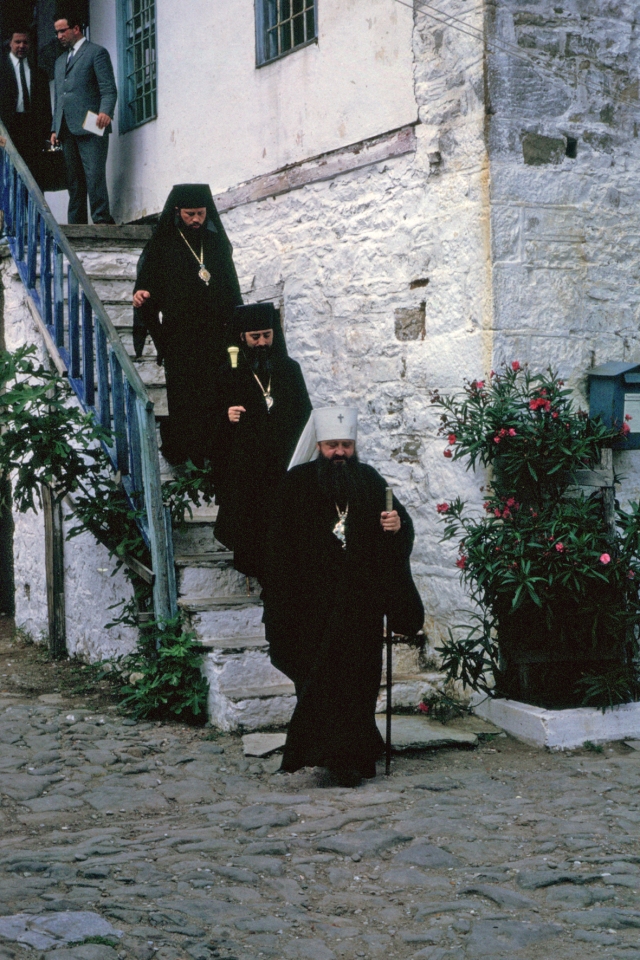 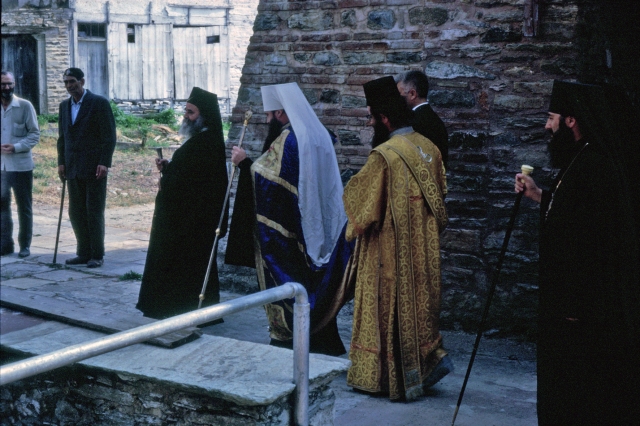 Nikodim in Karyes, with official clothing for a ceremony in the Protaton 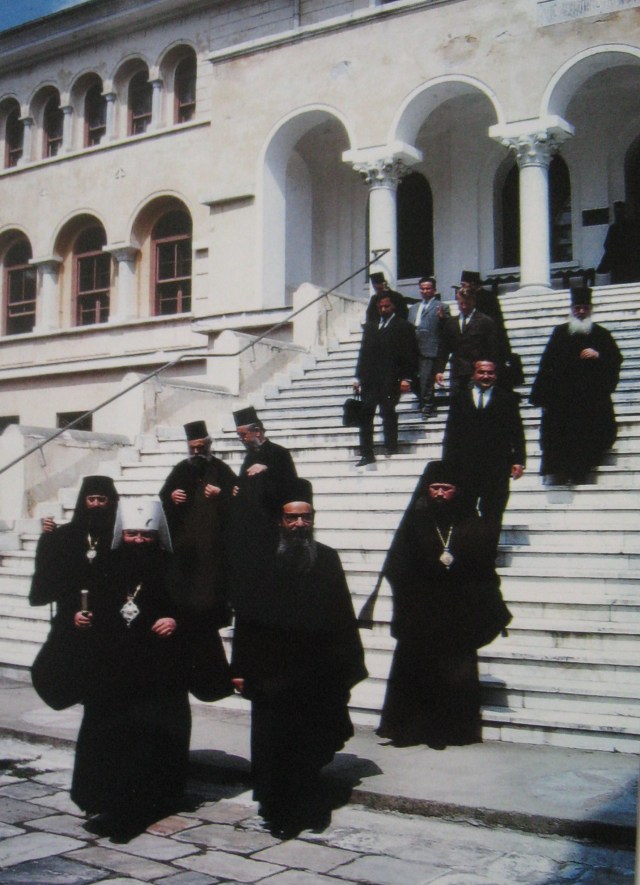 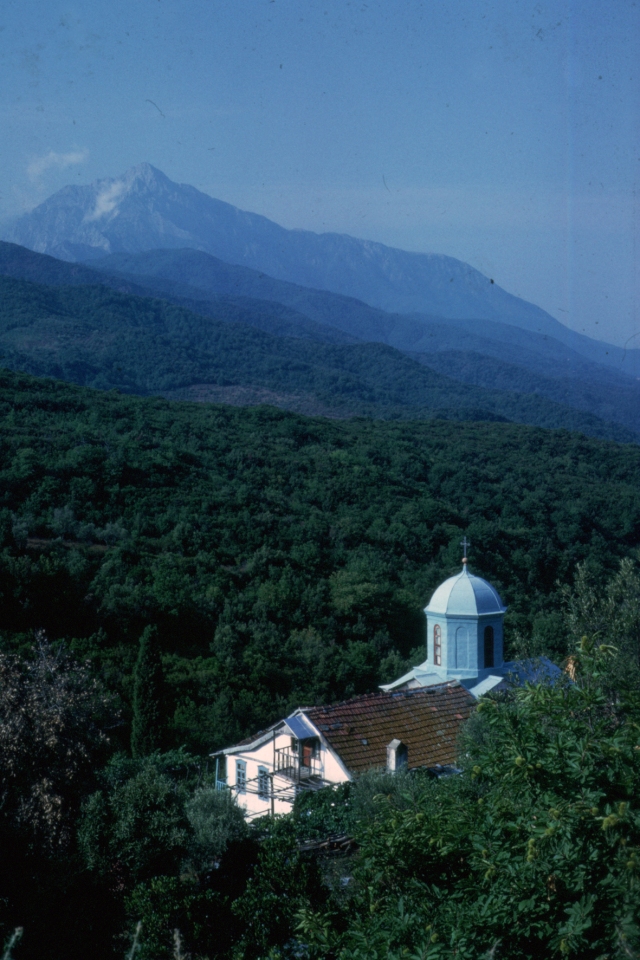 The small church near Karyes, seen from the road to Iviron. Nowadays this church painted with a bright blue/green color. 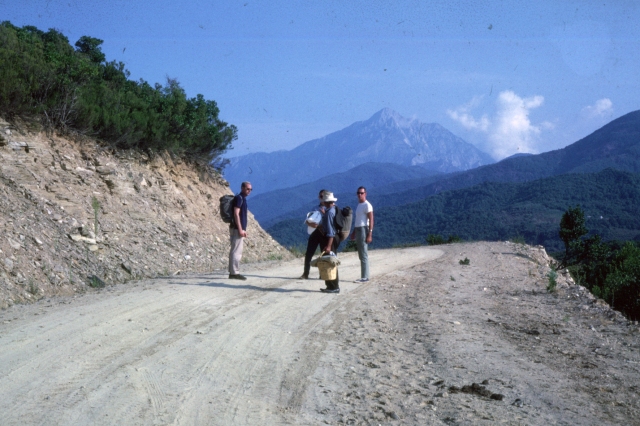 17th of August 1967: walking the gravel road to Iviron, with Mt. Athos in the background, with Jan Paul ten Bruggencate on the left (with short sleeves, nobody warned him in advance!). 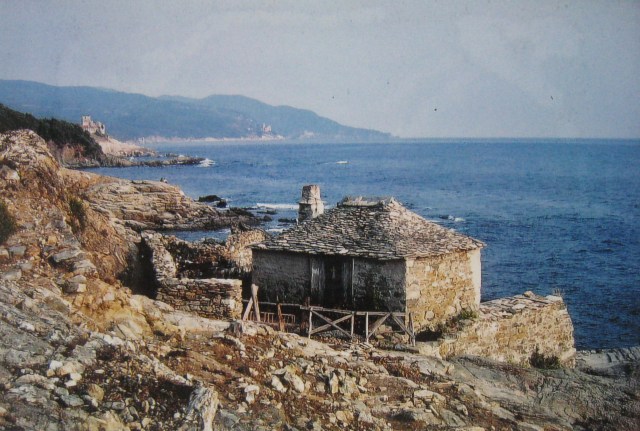 Kathismata (small house for one monk) on the road to Lavra. Stavronikita and Pantocratoros in the background. 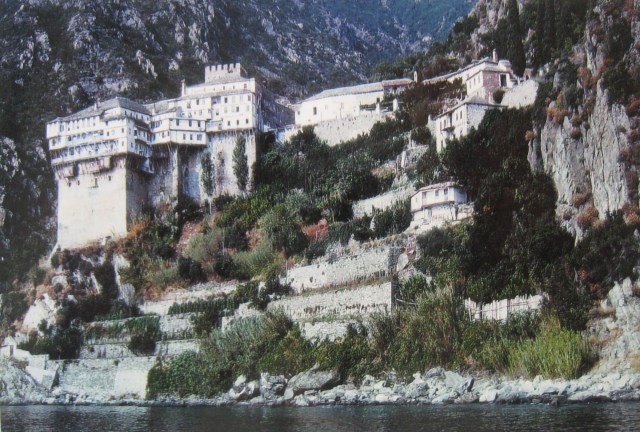 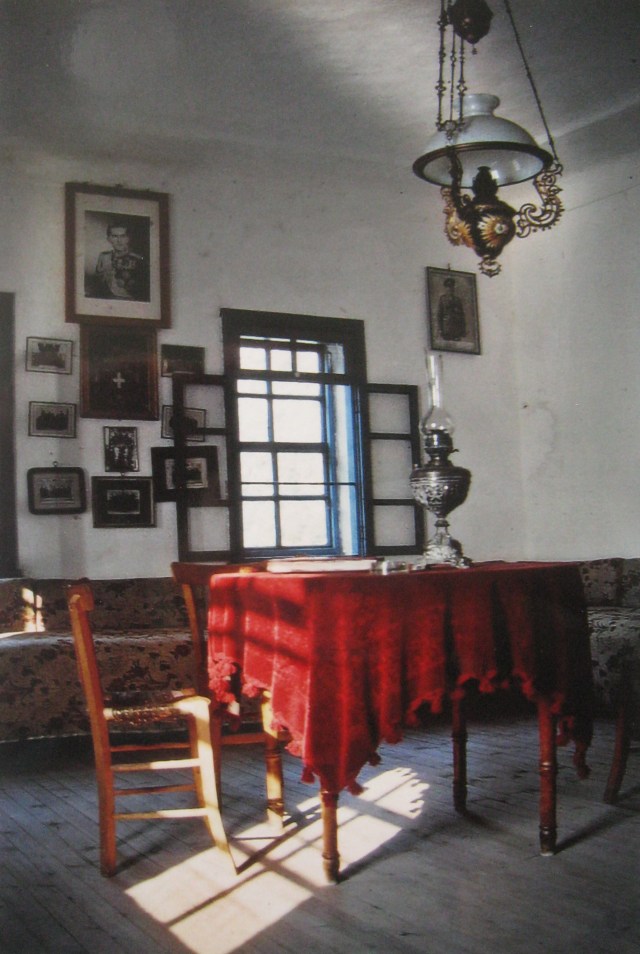 19th of August 1967: the guestroom of Dionysiou, with a portrait of King Constantine II still on the wall, who was forced to flee Greece on the 13th of December 1967. 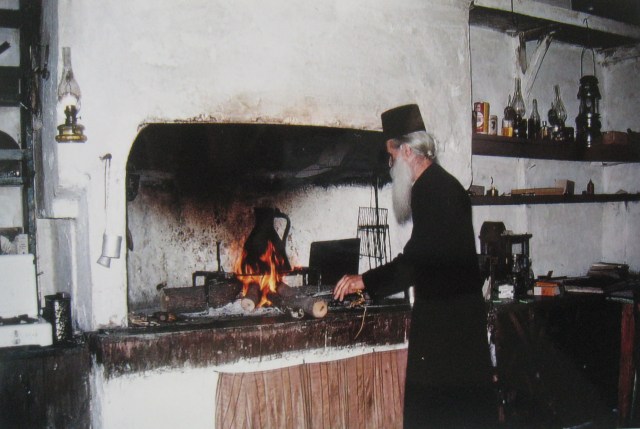 The tradional kitchen of Dionysiou with a wood fire 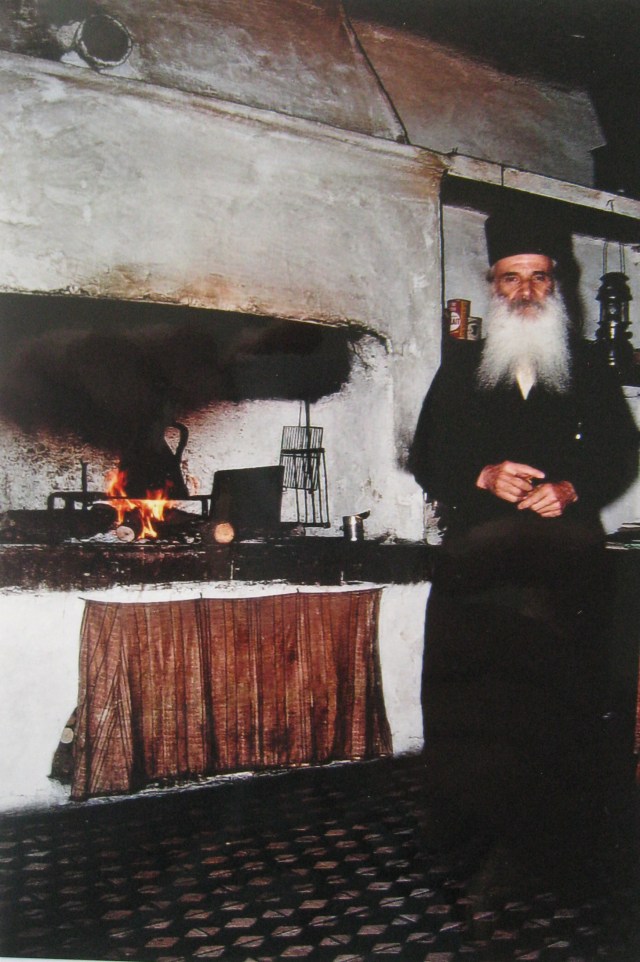 Fresco from the Trapeza of Dionysiou 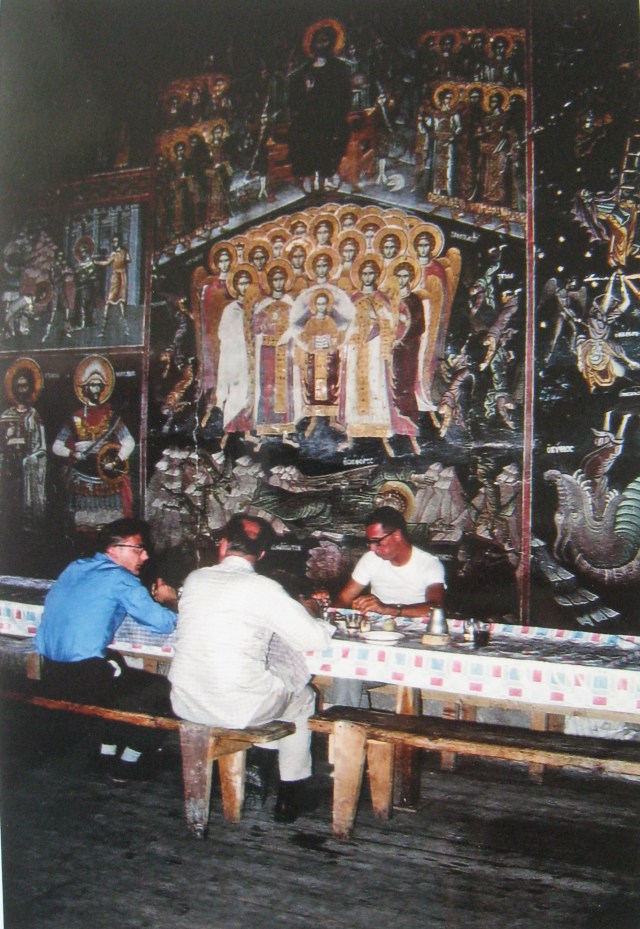 Mr. Ten Bruggencate and his friends in the trapeza of Dionysiou, with famous frescos behind them.

I would like to express many thanks to mr. Jan Paul ten Bruggencate for sharing these unique pictures. I also would to wish him a good trip to Mt. Athos this year, because he explained to me that this might be his last visit to the Holy Mountain, because of his health and age. Mr. ten Bruggencate is a blessed man to be able to visit Athos at his age of 80 and that he still is able to walk the Athos paths as much as possible!

This entry was posted in 05 Dionysiou, Karyes. Bookmark the permalink.