In this post from february 2015 I described all information that I could find on the internet about this extraordinary tower, that stands alone on the hill above the Rumenian Kolitsou settlement.  It is one of the few Katholic (besides the Amalfi tower) buildings on the Holy Mountain.

In my previous post I promised to visit this site and show them to you. In May 2017 I finally got the chance to go there.

This is the route we walked from Kolitsou to Vatopedi (5,4 km): as you see we started on a dirt road and soon after leaving Kolitsou the road turns to your right, where the tower stands. 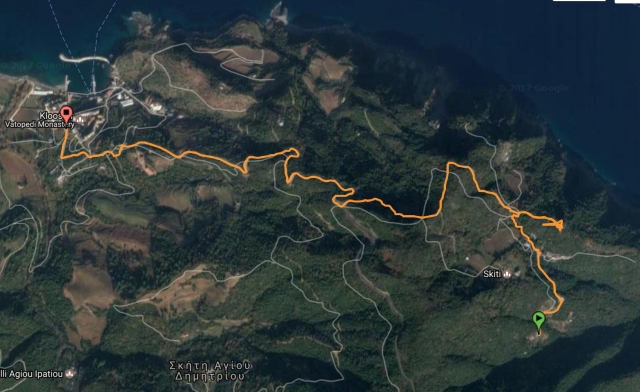 But before going to the tower I took two pictures of other kellions that belong to Kolitsou: 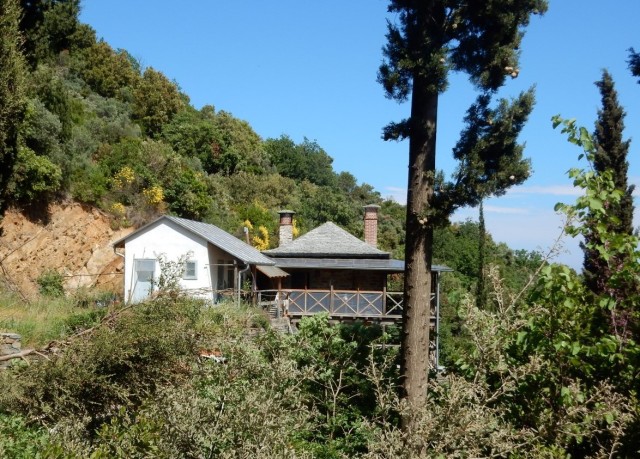 And just before leaving this area we saw this house, that was being re-build. 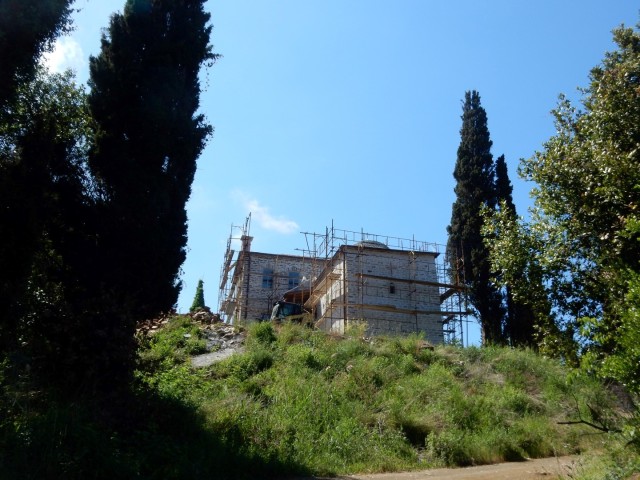 The workmen told us that the house would be used by Orthodox monks from Georgia, who would be re-settlling on the Holy Mountain after leaving Iviron monastery, many years ago! 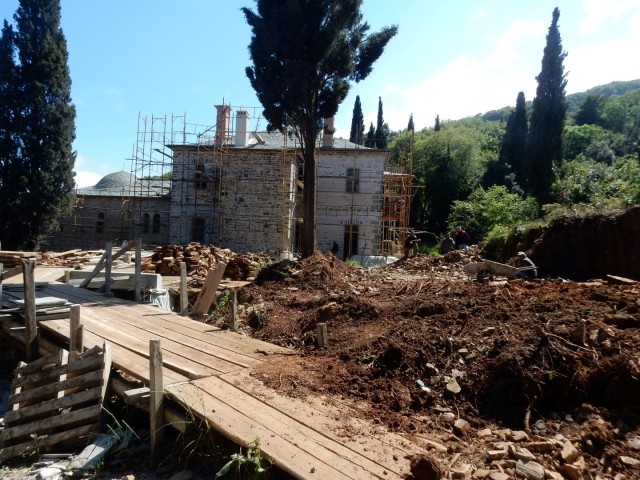 The new Georgian settlement on Athos 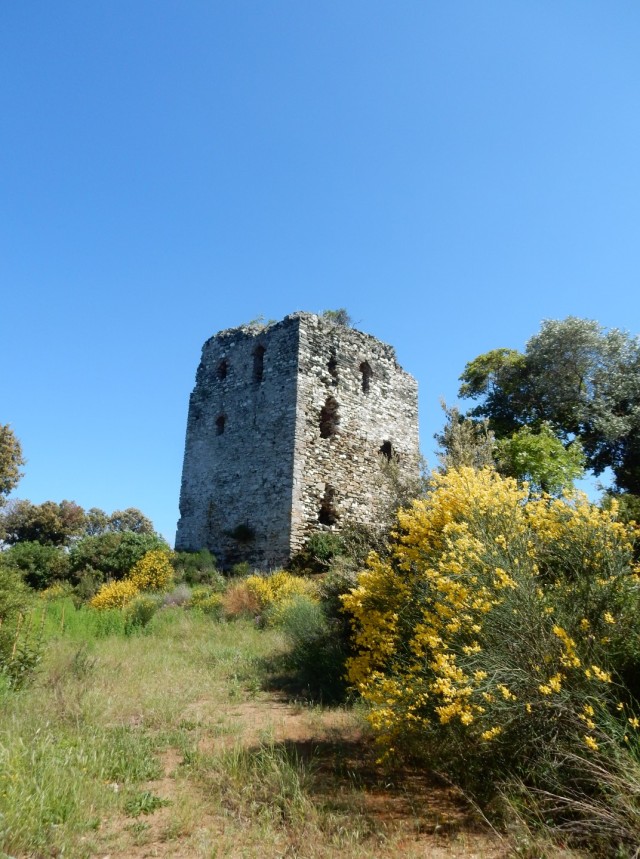 Here ends the dirt road in a path that leads to the NW side of the ruined tower of Kolitsou, with flowering broom surrounding it

The other – SE – side of the tower: in the wall on the right side you can see the contours of a roof of a house, that once was attached to the tower.

This wall is the only visible remnant of a building directly surrounding the wall: was it a part of the Collegio monastery?

A cross section of the tower (found here).

Here I found a way to get inside the tower. A warning is required: it is not without danger to go in because of falling debris and stones! 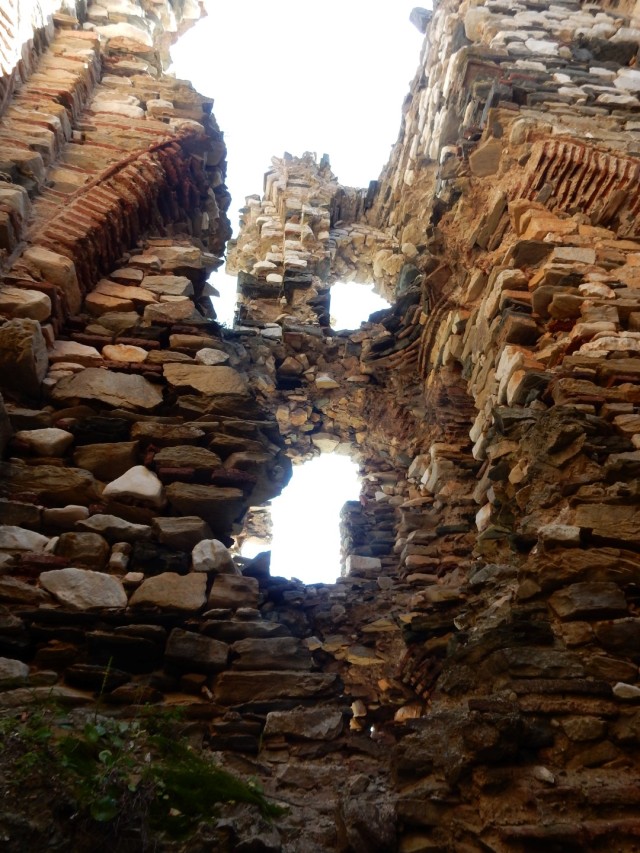 The crumbling wall above the entrance – West wall

The (East) wall opposite to the entrance. Look how they used different materials and building methods: sometimes natural stones to build the walls and arches and at other places mudbrick stones. 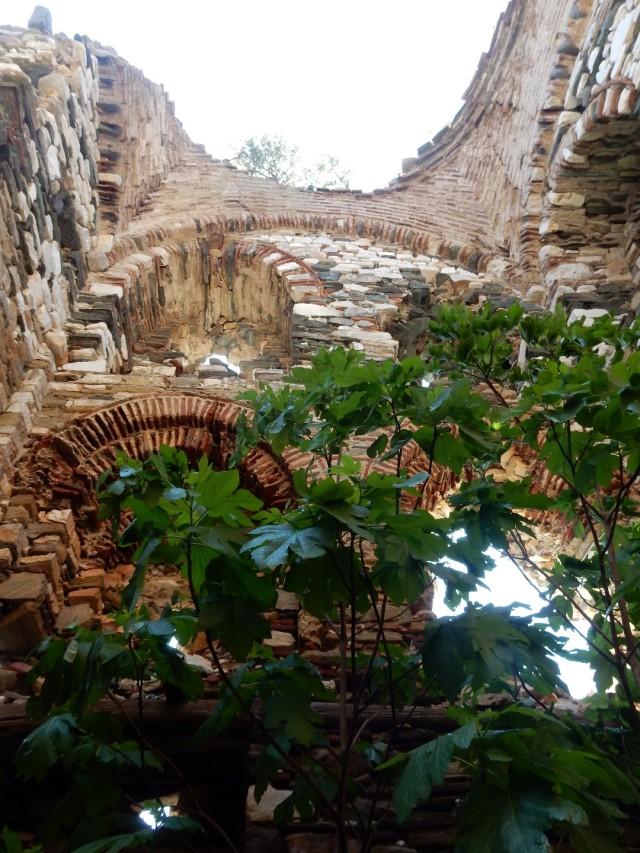 The North wall: a fig tree grows from the ground floor, that is filled up with a large layer of debris. 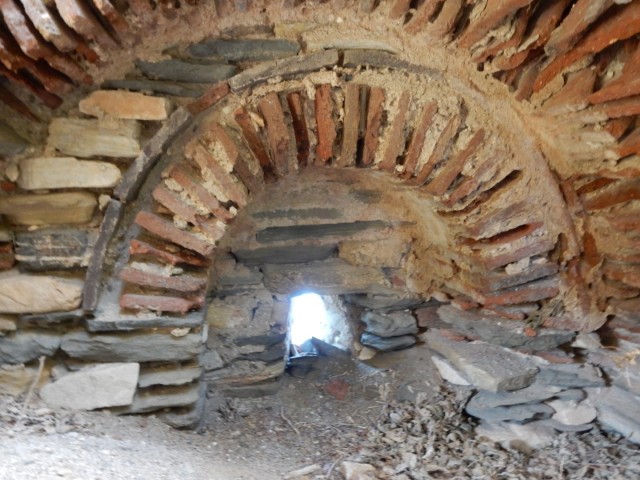 The ground floor: an arched window

Other arches on grond floor, almost covered by debris

The next window on the ground floor

A hole in the ground: might it lead to a cistrene?

A view towards the sea, seen through the East wall

A next view of Athos hills, seen through a hole in the Western wall

The Western wall with the hole 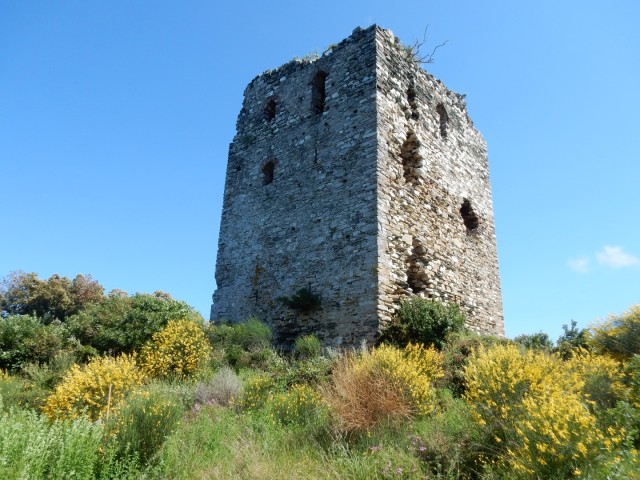 Leaving the tower towards the North, in the direction of Vatopedi

My intention was to find a foothpath to Vatopedi, as discribed on the FoMA site, but unfortuenately we missed it. This picture showes you the junction, where a sign shows you the road to Kolitsou (and pilgrim Tadeusz). 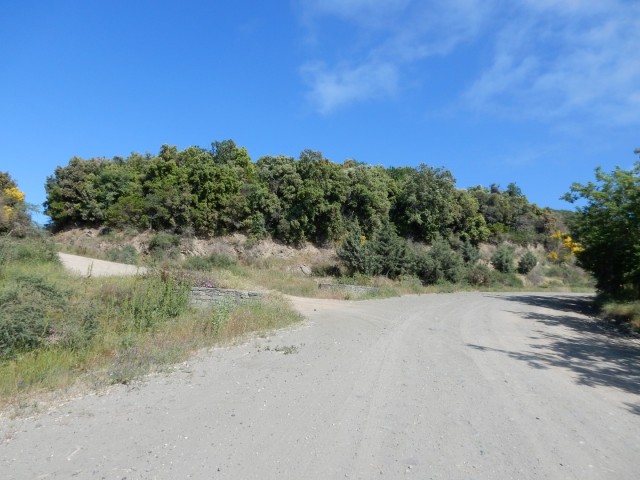 and this picture showes the junction where missed the foothpath (somewhere to the right going downhill). It is the place at the red X on the map below.

By coincidence we were able to walk the right path in the opposite direction a couple of days later, so on the following map you can see the (red) spot where the path (at first a road) begins: 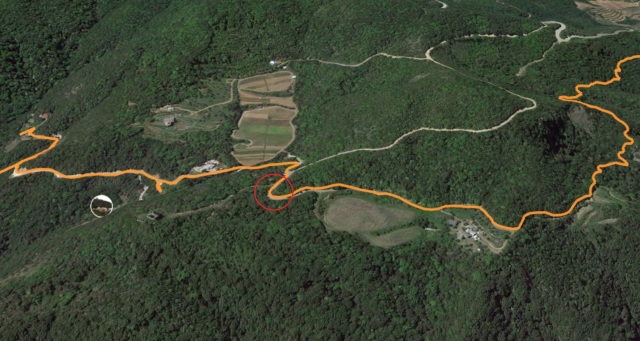 This hike is one kilometer shorter then the one over the dirt roads: 5,4 km over dirt roads and 4,5 km over the foothpath.

This entry was posted in ruins, trip 2017, walking and tagged FoMA, Kolitsoú, towers. Bookmark the permalink.