Time to take a close-up look at Lavra, to watch some details. The fountain in front of the catholicon was not working. The eagle spreads its wings. It doesn’t have two heads as might be expected. Below it we see right a griffin (head and wings of an eagle and body of a lion) and rams with impressive horns at the bottom. The erosion comes in bright colours. The shadow of the eagle took a rest in the big bowl.

In the southern monastery wall, where the cells of the monks are, some tiles can be seen. This one, with the three half-naked ladies and a child is, so I thought, quite special in a place where no living women are allowed. The ladies smile and look very happy, here on the southern wall. They do hold large bouquets. In the background we see traditional Greeks country houses and some cypresses. 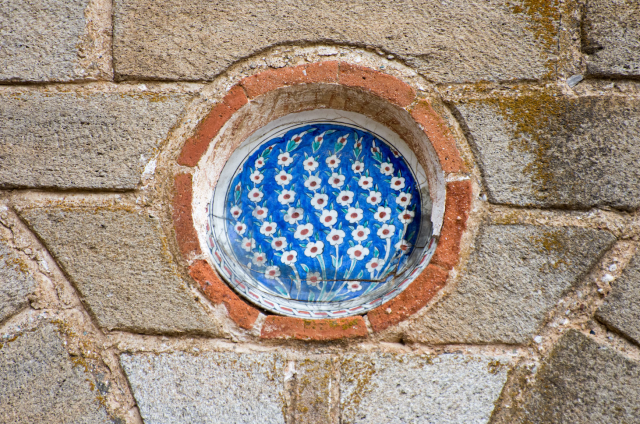 This tile, also in the southern wall, shows some more flowers laid out in seven vertical strings, A nice graphic image. The colours are still bright and fresh. 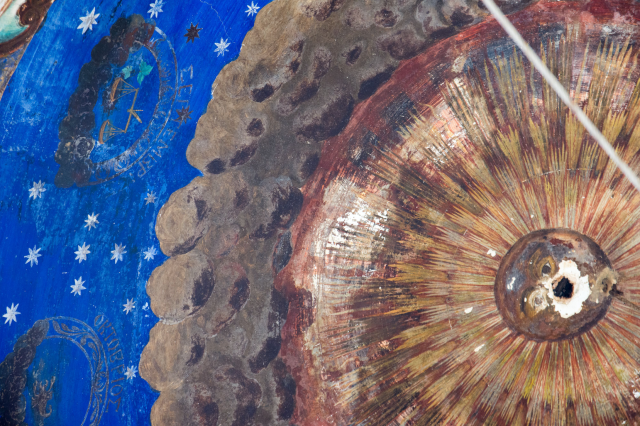 The ceiling of the cupola at the main entrance of the monastery shows the zodiac. We see Scales, and Scorpio in a beautiful blue starry sky. The eyed sun radiates its intense rays of heat.

The bright coloured glasswork of the exonarthex of the catholicon. Outside a long bench. The colours are mostly blue, red and green. But the shapes do vary more. 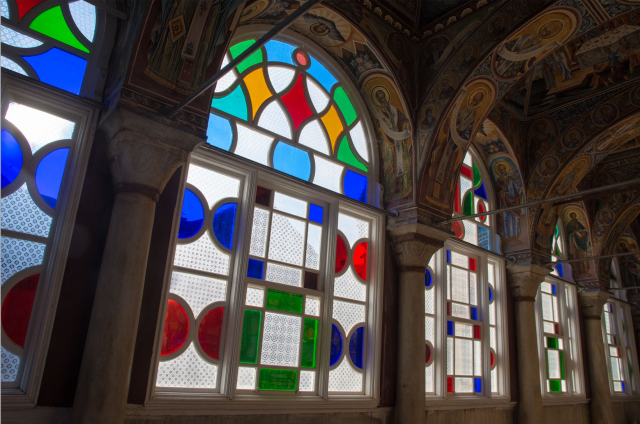 Other windows in the exonarthex show three shades of blue and ochre. Geometric round shapes filter the outside light on the transparent glass plates.

A symmetrical window from the outside of the refectory could use some paint, one could argue. I probably like it more in a certain state of decay. When the sun, rain and time have left their marks. The many shades in the green marble are almost drowned in the restored and over-enthusiastic jointing. The stucco dominates the stones.

A black cat watched the sunset from the kiosk. He was only shortly disturbed by my presence and turned his head slowly towards the pastels in the sky.