Posted on November 6, 2013 by athosweblog 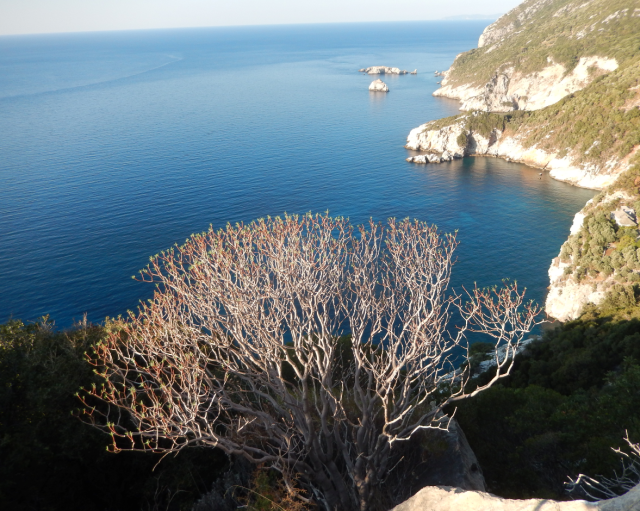 On the footpath (monopati) to the kellion of Saint Nelios were our group walked in september 2013 we saw this desertlike plant. On the right one of the last houses of Kavsokalivia. 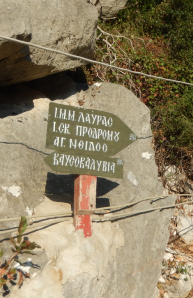 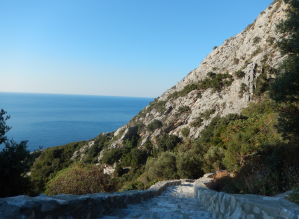 We walked from Kavsokalvia situated on the south slope of the mountain to Lavra. Stopping at Nelios and Skiti Podromou. It is a wonderful path with striking seaviews and in 2012 and 2013 workers replaced the rocky path by stairs so it is easier to walk then before. On the right picture the new stairs. 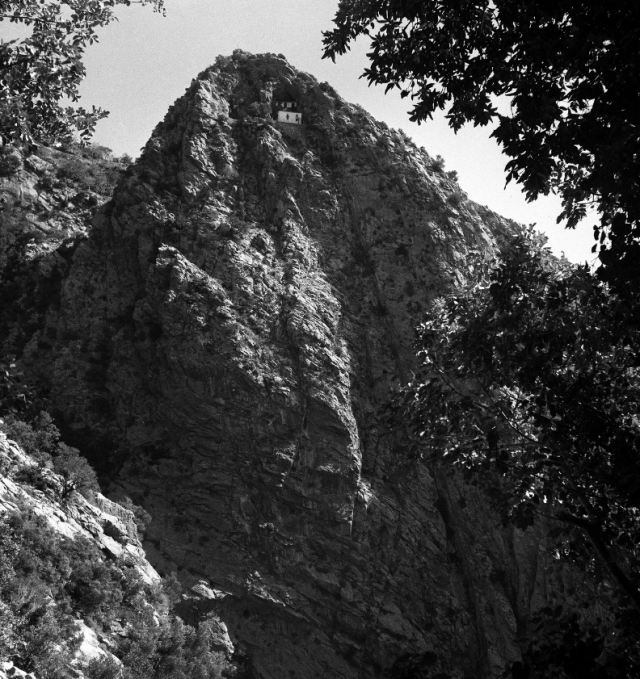 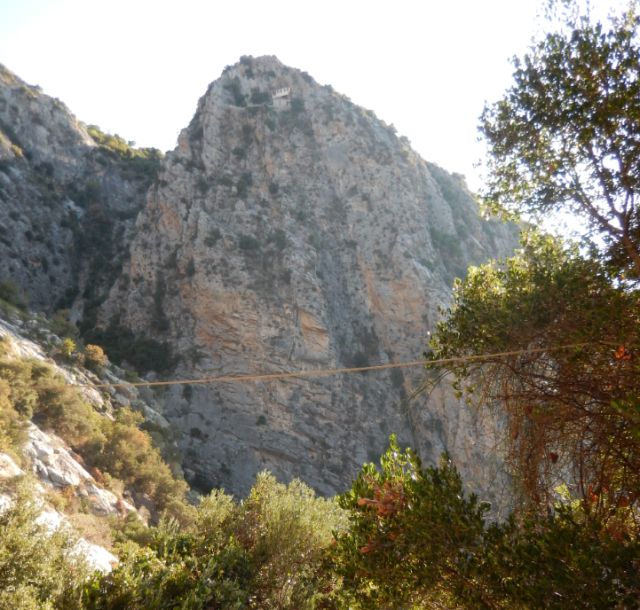 Then suddenly we saw the cave with the chapel of Saint Nelios. Sydney Loch said about this spot: ” Lodge and chapel hung between earth and sky like a birdcage against a house wall” . The black and white image is from 1950 and I tried to make the picture from the same spot. Then we climbed further. 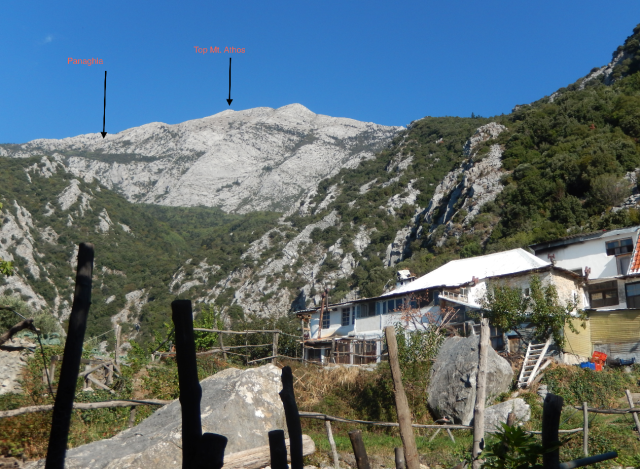 This is the kellion of Nelios. We didn’t not encounter anyone. I think the monks were asleep. The view on the mountain is special because you can see Panaghia at 1500 meters and the new chapel on the top. 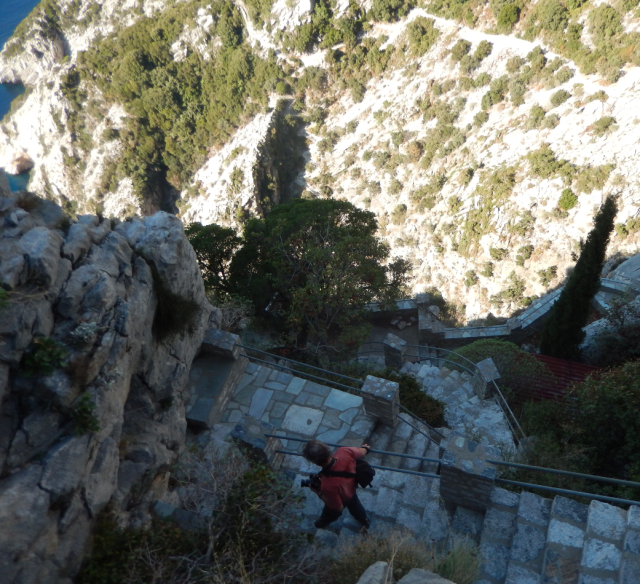 You have to walk down again to reach the cave of Nelios. In the old days that would be a dangerous descend but they made stairs to make it easier again. 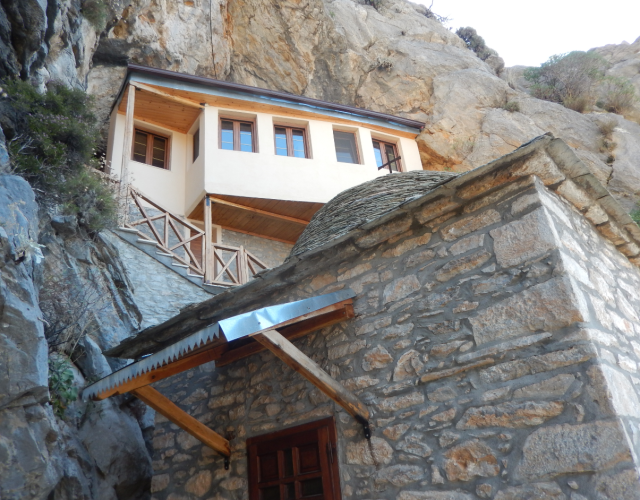 In the chapel below is the cave . The door of the house above was closed. 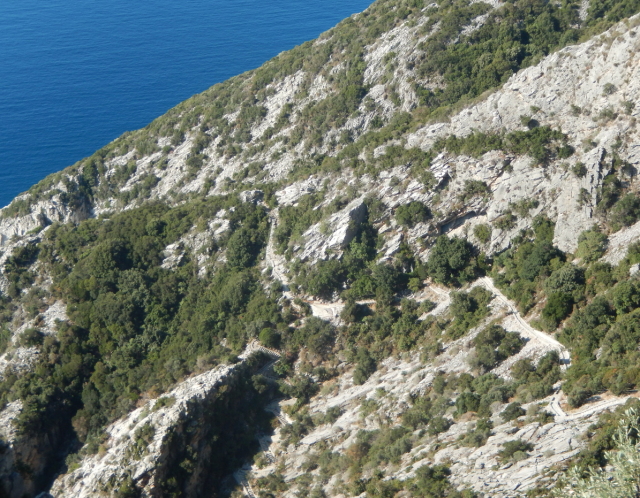 The view from the chapel in the direction of Kavsokalivia with the stairs we just climbed. In the chapel an icon of the saint and a picture of the burial of Nelios.

This is the story in short:  On his deathbed, St Nelios told his disciples to bury his body in a small cave beneath the cave where he lived, sternly forbidding anyone to disturb his body. Although the saint did not seek human glory during his life or after his death, the Lord glorified him in the following way. From his grave, a fragrant myrrh began to flow through a small opening in the cave and down the side of the cliff into the sea. Soon this miracle became widely known, and ships would come to collect the myrrh. The myrrh had curative properties, and many people were healed of their illnesses. Read more about the life of Nelios here.

Text and pictures (except the black and white) by hv. For my fellow pilgrim Warren Bensinger, who was also on Athos when these pictures were taken.

Like Loading...
This entry was posted in kellia, trip 2013 and tagged cave, Nelios, Saint Nelios, Saints. Bookmark the permalink.

3 Responses to 1470 – The house and chapel of Saint Nelios