(last post 515)
Our next aim was to visit Skiti Profitou Eliou and we started walking on the oldest road of the Holy Mountain, the one that leads from Dafni to Karyes and then to Iviron. To start with I took a picture with the yellow common broom, near a sign pointing to the monastery Koutloumousiou. The road heads to Iviron and Stavronikita.

A picture of a partly ruined but still inhabited house, with grapes growing along the facade.

A picture in the direction of Lavra, with wild lupin on the foreground.

Een kellion (farmhouse with chapel) with a very bright blue color and olive trees in the garden.

The turn to Kellion Panagia Portaitissis (=The Holy Virgin of the Gate, you can find the famous icon in Iviron).

A brook seen from a bridge near the turn to Pantocrator.

The old footpath to Pantocrator.

Here you can see the route we walked (we used the best map there is, made by mr. Zwerger- Austria Vienna). Where the line with the dots starts, we took a wrong turn. At this point the map is not accurate anymore, because a lot of new roads were build here and old paths disappeared.
We wanted to take a turn towards Skiti Profitou Eliou, which you just can see on the map. The picture shows the author of this blog in despair, hopelessly lost (and because of this we had to walk half an hour extra..). Luckily my watch had a altimeter and we noticed that the path stayed at the same altitude, where we should have been descending, so it helped us turning around after a while.

At the very moment I took this picture of the Holy Mountain in the haze, my travelcompagnons were just about to reach the summit at 2033 meters. Within half an hour I got a cell-phone call from the top with a live report of what they were seeing and feeling ! I am still impressed of what they achieved that day (the word says that they want to repeat their effort in 2009).

Down at the coast we saw the monastery Pantocrator: 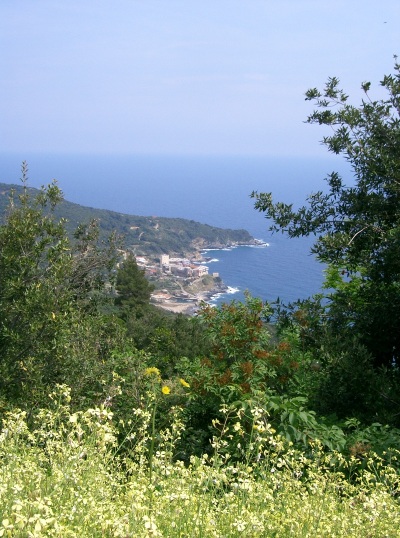 And then suddenly you will see Skiti Profitou Iliou: next time I tell you what happened there and what kind of pleasant encounter we had.