Posted on January 9, 2016 by athosweblog

When leaving Chilandariou for Esfigmenou you first come across the cemetery with some temporary black crosses. According to Athonian custom the remains are gathered in an ossarium after being buried for in the ground two years. The design of the red grid of the chapel struck me. 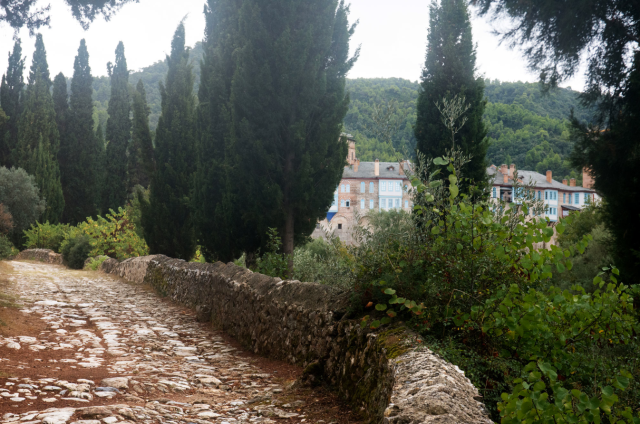 This is one of the last views of Chilandariou, looking back, when we left the monastery. It is a short, relatively flat and easy hike to Esfigmenou on the dirt road. Here was still a part of the old cobbled pave way along the dirt road.

The approach to Esfigmenou from the dirt road. It looks like an impressive medieval complex with two strong defensive towers. The first mention of Esfigmenou was in a letter dating from 1016. But most of the current structures date from the first part of the nineteenth century.

This old print shows the situation to land before the pier was built. (Picture from the site of Esfigmenou). 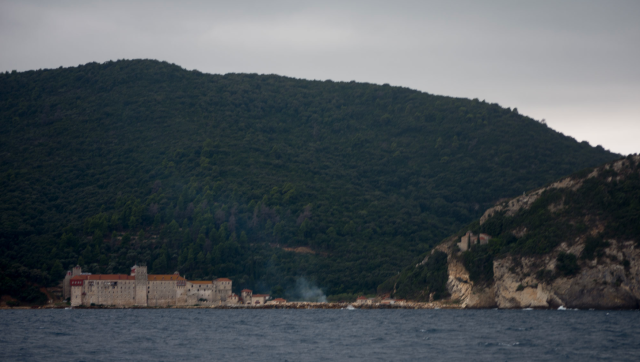 The day before, we already saw the grey complex in the distance from the water, with its abundant green backdrop. The boat did not call at Esfigmenou and it did not enter the bay. So we saw it from quite a distance. Now it is time for a closer look. 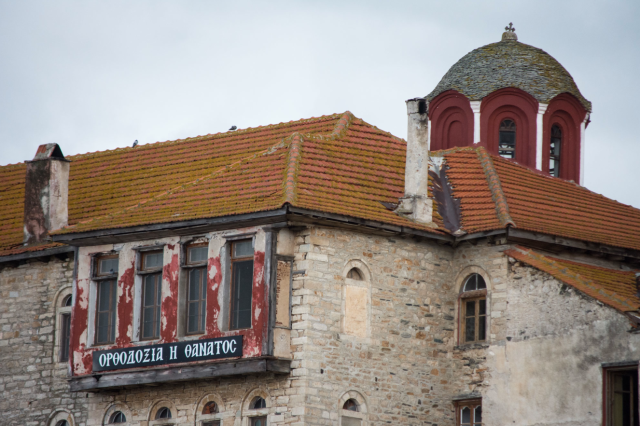 And there it is; the (in)famous sign of Esfigmenou: “Orthodoxy or Death”. Esfigmenou holds an ultra-Orthodox stand. They oppose to the ecumenical idea of talks with other Christian churches, and especially the Roman Catholic church. Therefore they like to call themselves zealots. They argue that there is only one church and only one baptism. The mere idea of more than one church, of more than one possible interpretation of the bible, is an absolute heresy for them. Therefore they state that the idea of ecumenical approach and Orthodoxy are mutually exclusive. There is a lot to tell and read about these issues. And the struggles, fights and isolation of Esfigmenu. I found this story interesting. But there are many more to be told. I find it painful that in this peaceful part of the world a conflict like this continues and that it could not be solved since the other nineteen monasteries expelled Esfigmenou in 1972.

Above the banner, behind the last patches of ox-blood red paint, are the guestrooms.

The view of Esfigmenou from the pier. The building looks grim and grey. A structure to defend one selves. It looks closed and unwelcoming at first. But the monks received us very warmly and full of joy. In the guesthouse we rested for a while and we were given all that we needed. 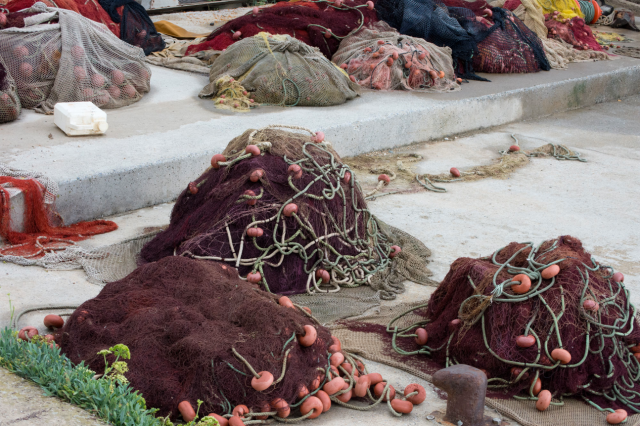 The community of Esfigmenou is, because of its isolation, very self-sufficient. They have a large vegetable garden and they do fish according to the nets on the quay. A fifty meters from the pier we saw a monk in greyish clothes fishing with a rod. 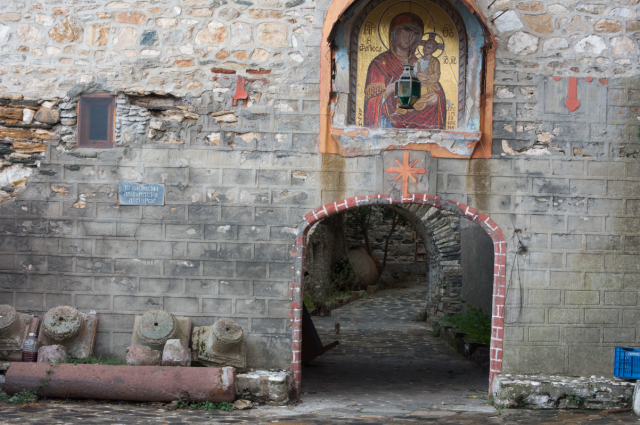 We thought we could enter through this old gate at the waterfront as well. But we were mistaken. The monastery can only be entered through the main gate. We saw interesting remains, pillars of an older building.

Close to the gate lay a dead rat. A kitten approached it carefully, smelled intensely but did not touch of eat anything. This clever cat did not poison itself.

The view through the screen from the guesthouse with the road to Chilandariou to the left. An old fire-engine is parked forever on the road.

This entry was posted in 18 Esfigmenou, trip 2015 and tagged zelotes. Bookmark the permalink.