1078 – National Geographic was called to the Holy Mountain 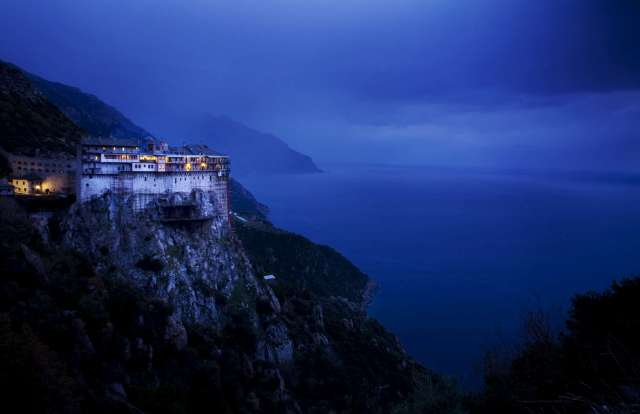 The December 2009 edition of National Geographic Magazine (NGM) pays tribute to the Holy Mountain. The well written story (`Called to the Holy Mountain, the monks of Mount Athos`) is by Robert Draper and the fascinating pictures by the young American photographer Travis Dove. The story is in fact an short introductory course on Athos for the general public. In post 920 the article was announced. It is a very lively article mainly because the author succeeds to tear the monastic community out of its anonymity by naming and quoting the monks. Here is a short passage to give you an impression:

`A waywardhippie from Australia named Peter is now Father Ierotheos, an accomplished baritonechanter at the Iviron monastery. Father Anastasios learned to paint here and now exhibits his work in places as far-flung as Helsinki and Granada, Spain. Father Epiphanios took it upon himself to restore the ancient vineyards of Mylopotamos, and today he exports excellent wine to four countries, in addition to publishing a cookbook of monks’ recipes in three languages.`

The article ends with this sentence: “Yet the brotherhood proceeds as it always has: inchwise, turned ever inward, glorying in the unseen digesting death, in the words of one of its preeminent scholars, Father Vasileios,”before it digests us.”‚

The pictures of Travis Dove are wonderful and touch the essence of the monasticlife.  In accordance with the story the emphasis is on the Athonians; the monks and their community. He was able tophotograph them in their natural habitat. There is a sense of openness from thesite of the monks. They seem to be at ease as a photographic model.

You can read the whole article here.  There is aslide show of Doves pictures:

On the website of Travis Dove there are more pictures of Athos (the ones that were not chosen to be published in NGM).

Says Father Makarios of Simonos Petras: “For those who consider themselves already dead to the world and are living for God, leaving this world is easy.”

NGM has got some more pictures of Athos. For instance these sculls of Simonos Petras, like this one by James L. Stanfield.

Monks pile the bones of brothers in a charnel house.

This entry was posted in monasteries, Orthodoxy. Bookmark the permalink.