After a long and steady ascent on a broad dirt road we finally reached the monastery of Paulou.

The industrious workers of Paulou had cleared the paths. The path to the right leads to the kiosk. This picture was taken from the entrance gate of the monastery.

The courtyard was still covered with a good pack of snow. In front one can see the wooden semantron, the instrument to call for service. Behind it the entrance of the church, the Katholicon. Enormous packs of melting snow glided of the roofs onto the pavement.

We received a warm welcome with Tsipourou, loukoumi and water. And later we received in gratitude, some bread, tarama salata, olives and halva for lunch. There was a monk cleaning the floor with a broom who was constantly joking with us and another pilgrim who was in the same room. I discovered that my walking shoes were leaking and that my socks were wet. That explained my cold feet.

I stared a while at the new ceiling in the guestroom. Fascinating shapes and amazing colouring, that I had not seen before. Not here and not elsewhere. The design of the ceiling lamp doesn’t seem to match. 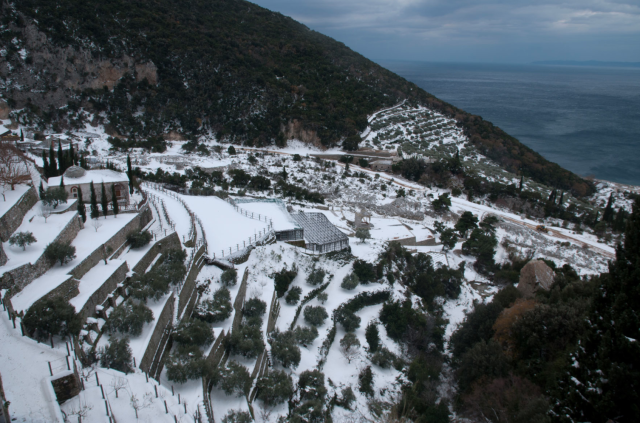 The balcony adjacent to the guestroom is not for the vertiginous, the drop is very dramatic and it overhangs the wall. Near the cypresses – as always – the graveyard. The symbol of the cypress originates from an old Greek myth, I found out. A young man, named Kuparissos, had killed a beloved tame stag. Deeply ashamed he wanted to mourn forever. So he requested Apollo for eternal mourning. Apollo turned him into an tree, into a cypress to be precise. The tree’s sap symbolizes his tears. (according to Ovid). The path to Nea Skiti is visible just above the olive orchard in the middle of the picture. But we were not aware of that yet. 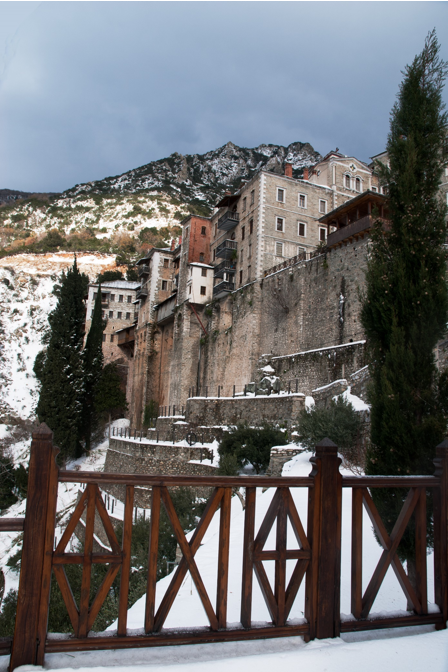 The view from the graveyard looking up to the monastery. The overhanging balcony with the roof in front of the cypresses is where we enjoyed the traditional welcome.

The icicles on the roof of the graveyard building had grown at least 30 centimetres. “They form a tinkling poem of their own”. They were like the horns of unicorns. The boys made fun by putting them on their foreheads.

Recently I read an article by Robert Macfarlane (Guardian, 27th February 2015) who collects unusual words for landscapes and natural phenomena. In the article he gives some examples of the word “icicle”. “The variant English terms for icicle – aquabob (Kent), clinkerbell and daggler (Hampshire), cancervell (Exmoor), ickle (Yorkshire), tankle (Durham) and shuckle (Cumbria) – form a tinkling poem of their own.”

The last view of Paulou, just before we turned around the corner of the hill. The light was still dramatic and changing rapidly. This was the first patch of blue in the sky in the new year. A hopeful sign for better weather. We were on our way to Nea Skiti. Full of expectations. We had heard about the friendly reputation of the skiti. And we were told about the jackals that can be heard there after sunset.