Is a blockade of the borders of Mount Athos to be expected, to avoid pilgrims from entering? 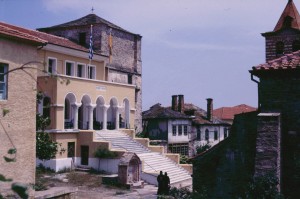 The building of the Holy Epistatia in Karyes – 1989

A double gathering will be held next Thursday, March 24 at the Holy Community of Mount Athos, where apart of twenty representatives of participating monasteries, abbots will join the meeting. Usually, the body shall hold regular meetings at Easter and on 15 August to address major issues of Mount Athos, but this emergency congregation will meet to discuss the attitude of the Holy Mountain towards the Greek state and government, for the negligence displayed on important issues. It was promised that major issues would be resolved through inter-ministerial committee, set up last October by the Prime Minister, but it remains inactive.