The coastal tower and ruins in 1853 with on the right the monastery of Paulou and on the left the southern slope of the mountain itself. In front,  part of an arch is visible, nowadays gone.

From a slightly different angle the tower in 2013. Watch the red design on the wall: A red band, a cross and  something that is interupted by the big gap in the middle. Mount Athos in the background with some clouds and Paulou monastery.

In 2014 ( or earlier) a restoration of the tower started. When we walked by on the first day of 2015 I took this picture. The big gap in the front building is restored (watch the different grey stones) and the unknown shape appears to be some kind of arch or fake window. The tower itself is made higher. I am wondering if the restorers knew the recently published photo of 1853 when they made their restorationplan. Did they know that another building (with an arch)  was standing left from the tower or did they choose only to rebuild the ruins that were still there?

The design of red bricks and on the left the battlements for defending the tower against the enemy. 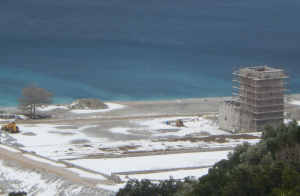 The whole coastal area around the tower is being restyled and made into large terrases.

The position of the tower  near the coast and the new developed land seen from the path to Nea Skiti and Agiou Anna. The snow is already melting.

NB. according to the Mylonas ‘Atlas of Mount Athos’ the ruined watchtower once stood along the old coast line. So, it is possible that the large ‘arch’ as we see on the 1853 photo, might have been a part of a former boat house (arsanas), that nowadays lies South of the old watchtower. This fits the ‘Athos- architectual’ principles on other locations along the coast, where defence- or watchtowers usually stand next to the boathouses in the harbor. (Wim)

This entry was posted in 14 Paulou and tagged towers. Bookmark the permalink.