Posted on September 5, 2016 by athosweblog

Time Magazine 12-19 September 2016: an article about the pilgrimage of Putin to Athos May this year and about the role of Orthodoxy in the present Russian governement and society (available at your local bookshop or Blendle).

Here an article about Putins interest in the Holy Mountain in the Spectator,  a weekly British conservative magazine. 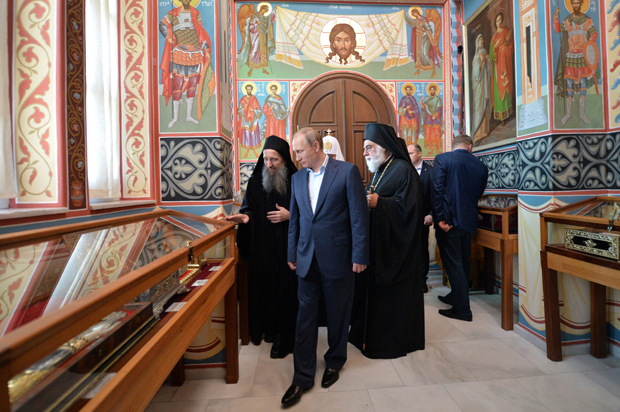 Russian President Vladimir Putin (C) visits the St Panteleimon Monastery on Mount Athos, in Karyes on May 28, 2016. Putin, who has often talked about his strong Orthodox faith, will join celebrations for the 1,000th anniversary of the Russian presence at the ancient, all-male monastic community of Mount Athos. The visit, Putin’s first to the EU since December, comes at a low ebb in relations between Russia and Europe over the conflict in Ukraine that broke out in 2014, with sanctions still in force against Moscow. / AFP / POOL / Alexei Druzhinin (Photo credit should read ALEXEI DRUZHININ/AFP/Getty Images

This entry was posted in news, Orthodoxy, people and tagged Putin, russians. Bookmark the permalink.