1633 – the hike from Skiti Xenofonos to Skiti Profitou Eliou

Posted on October 9, 2014 by athosweblog

After visiting skiti Xenofontos we continued our hike to skiti Profitou Eliou. This blue line shows which route we took:

with the data from my GPS-app MotionX:

On these 4 spots on the first part of our hike I took pictures. The photo below is shot just after leaving skiti Xenofontos:

Looking at the highest point of our hike, 561 meters.

Unknown territory lies ahead, after this we reach spot nr 2: 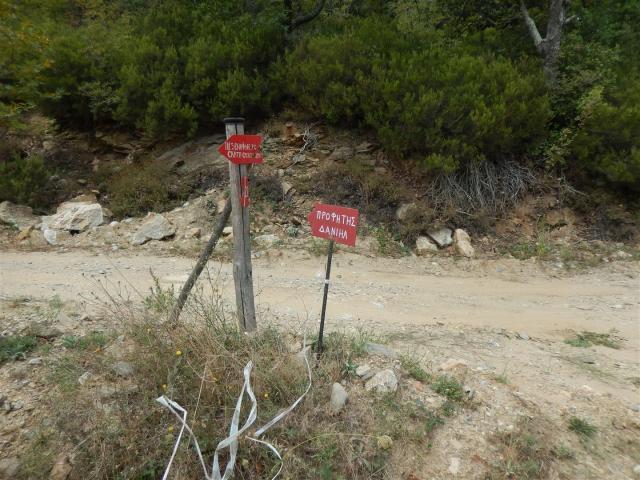 Spot nr 3: a road leads up the hill, to “Zachara” and “Ieron Keliou Profitou Daniel”. The valley below and this area of Athos is also called “Zachara”. Soon after this turn a sign to Karyes appears:

Then we arrive at the spot where the road takes a sharp turn and where another road leads to Kelli Plakaria. On the map below the sharp turn can be seen in lower left corner: 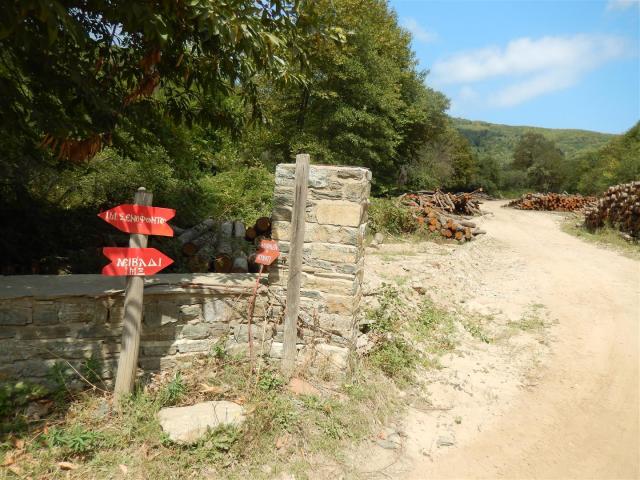 The “sharp turn” and the road to kelli Plakaria. The signs might deceive you, because one of them says “Apagorenetai to Kynigi”, forbidden to hunt! 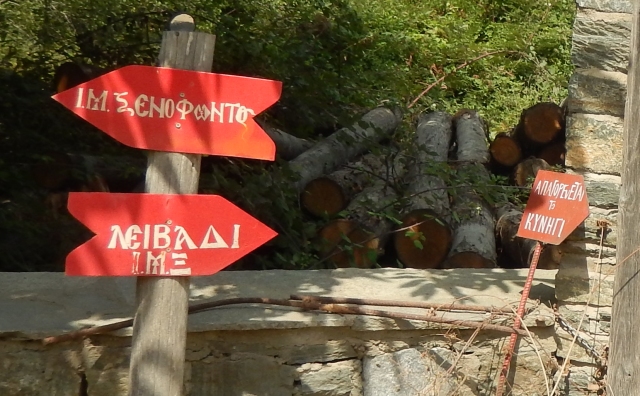 The architecture of the building is not typical for Athos, especially seen from this side.

The garden seen from the balcony: unfortunately nobody was home or could be found, except for a friendly but scared dog

So we decided to continue our walk. Next to the shed you can see a large iron antenna.

Beehives near the kelli: you can see the roofs and the antenna

The paths and terrain gets more rough

Brambles hinder the passage, so garden scissors comes in handy!

And then we reach the importent junction of roads: Stavrou.

Here the path ends, so beware, it is almost impossible to see when you want to find the path to Plakaria! 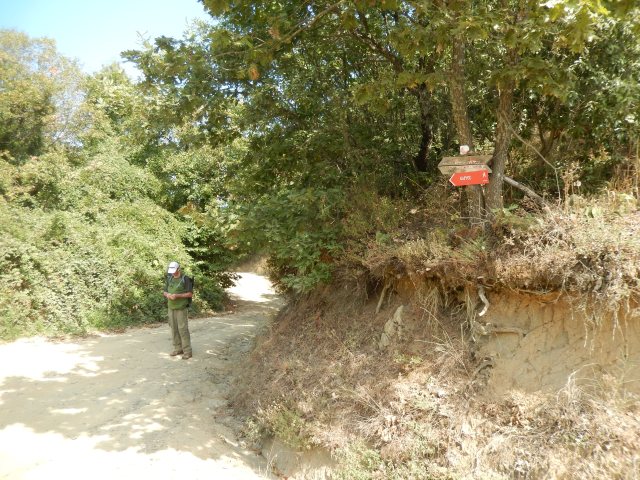 We continued to walk straihght on towards Profitou Eliou, but finding the right dirt road became more and more difficult 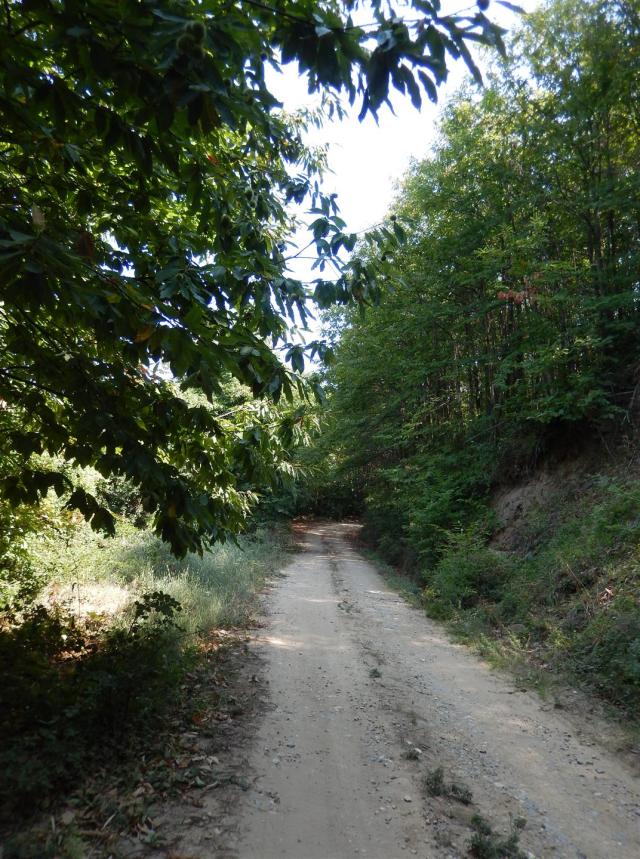 The road straight ahead 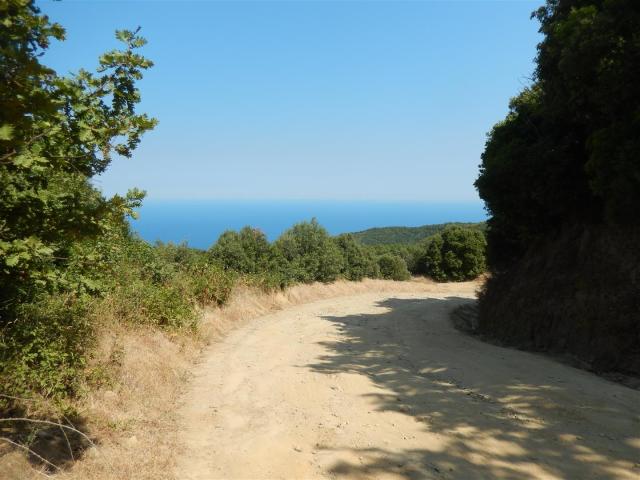 A view of the sea on the other side: Profitou Eliou comes near! 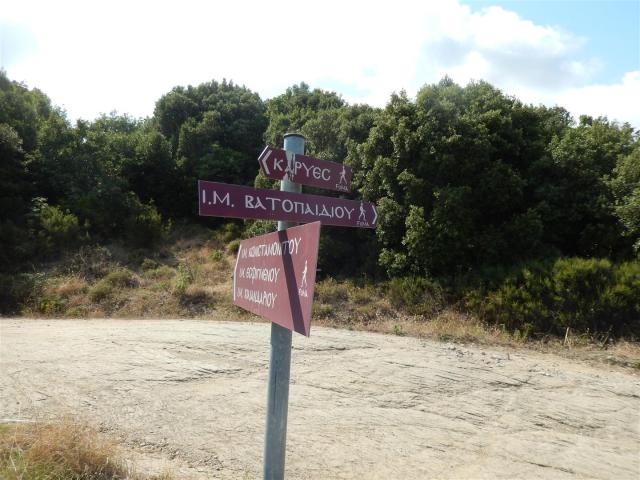 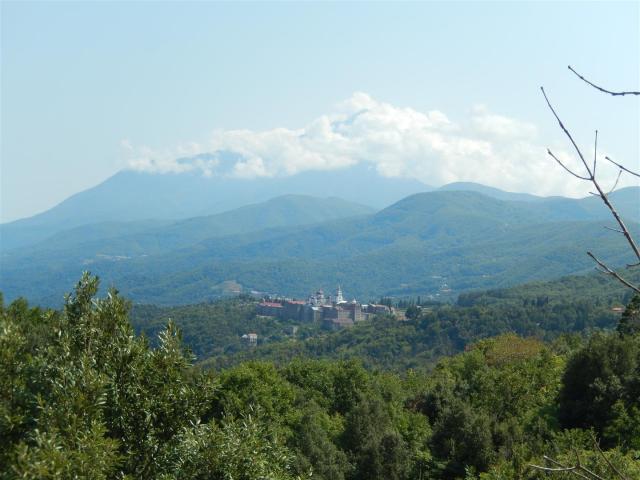 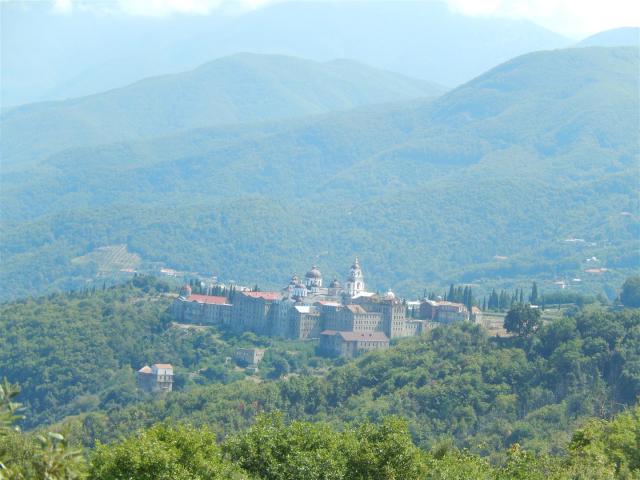 Not far from this point we made a crusual mistake and took the wrong turn:

If we had followed the red line we would have walked another 20 minutes or so to reach Profitou Eliou, but we choose to take a turn and walk the blue route, that took us more then one hour! 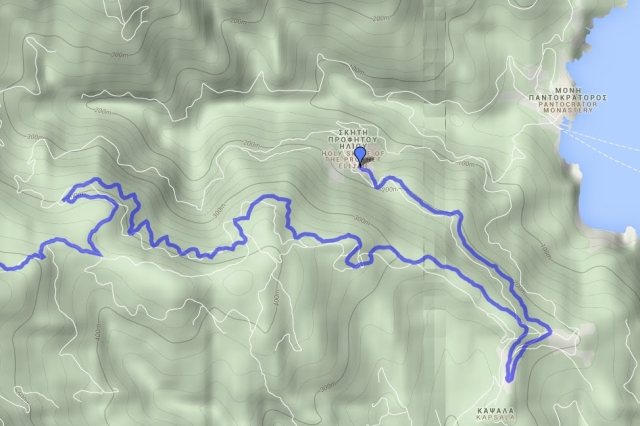 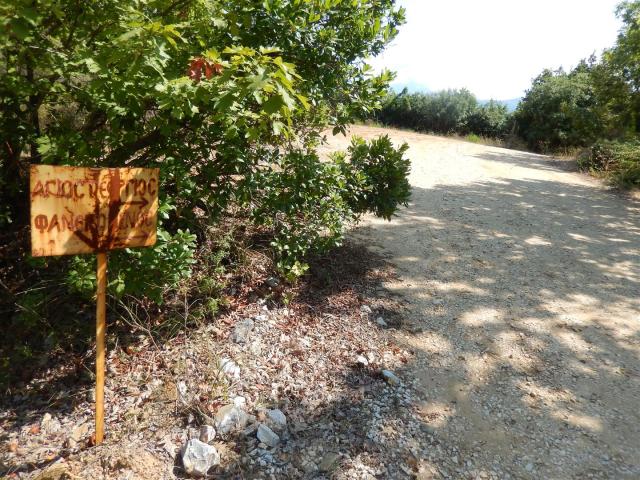 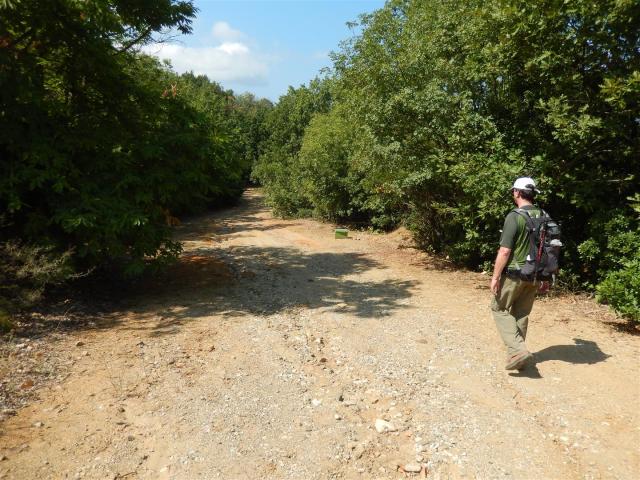 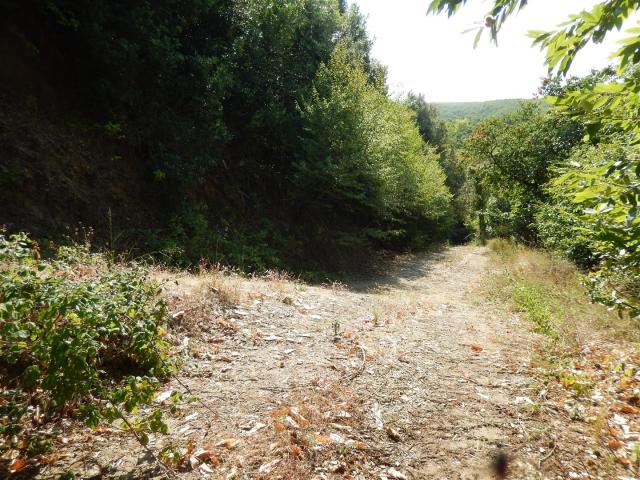 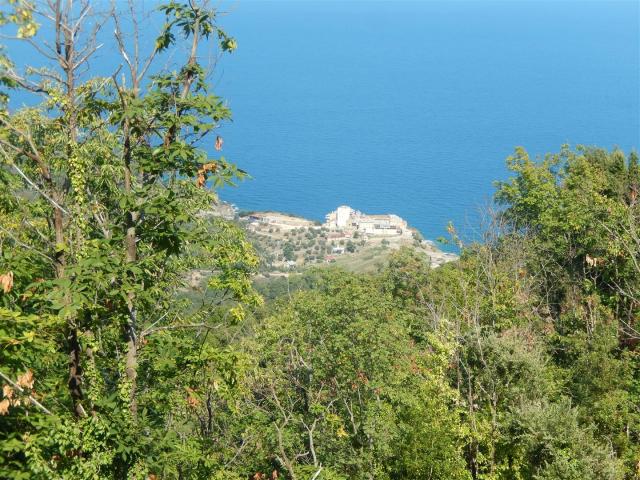 With a view of Pantocratoros 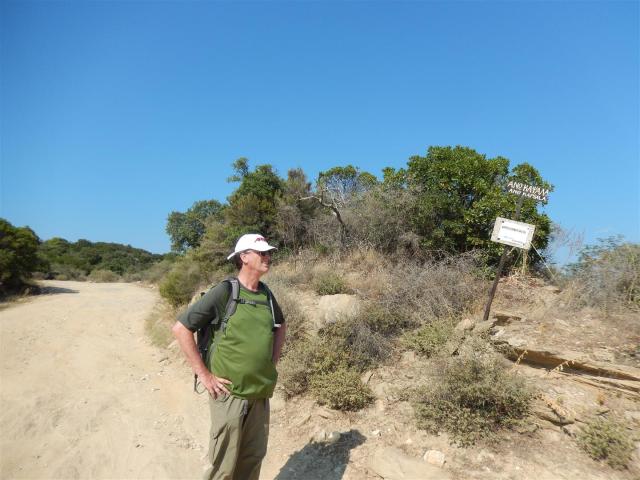 Ending up at Kapsala, not far from Karyes… 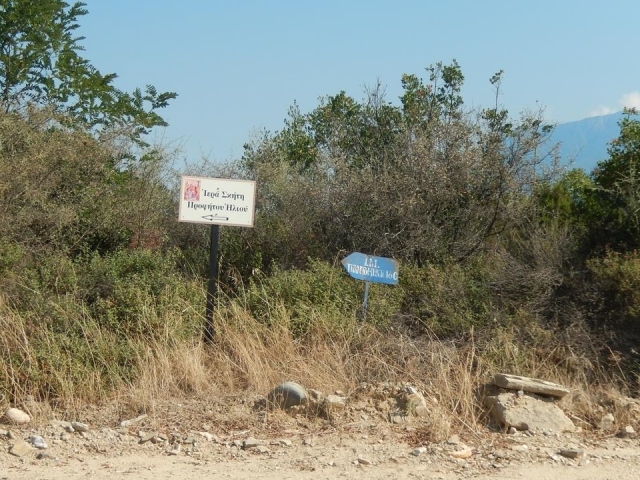 And then finally, the sign that we hoped to see much earlyer: Profitou Eliou!

Looking at a magnificant view over the peninsula

Taking a last turn the skete 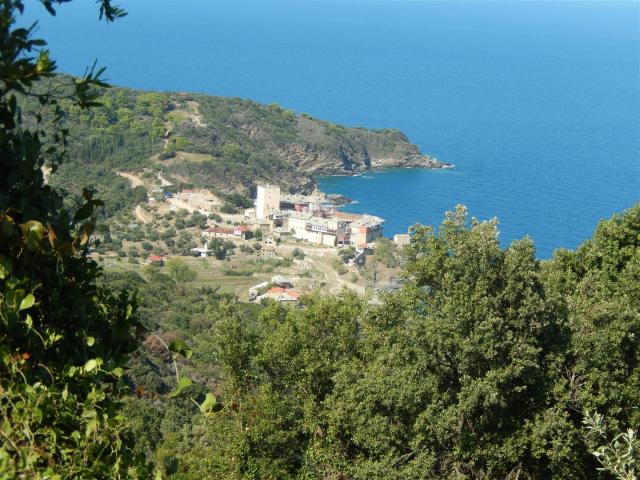 With – again – Pantocratoris below us:

we finally arrive at the skete after 17 km and almost 6 hours walking!!

This entry was posted in skiti, trip 2014, walking. Bookmark the permalink.