A fascinating book about the Greek Orthodox monastery at Mount Athos. This large and handsome book is lavishly illustrated throughout with photographs, Sherrard was a British scholar who lived much of his life in Greece, and followed the Greek Orthodox religion. Published nearly 50 years ago.

From the Dust Jacket: “Mount Athos, the rocky peninsula that projects into the Aegean Sea from the coast of northern Greece, is famed as the home of several thousand Orthodox monks, living in numerous cells and monasteries. Here is carried on a way of life begun by the early Christian hermits of the Egyptian desert and brought to Athos over a thousand years ago. Dr. Philip Sherrard, a Fellow of St. Antony’s College, Oxford, who has devoted himself particularly to the study of Greek Orthodoxy, has lived on Athos, and had the benefit, for this book, of highly skilled photography and colour-printing. The result is to present the life of the monks, in its setting of landscape, architecture, and art, with extraordinary vividness and sympathetic understanding, superb photographs being matched by first-class writing. This is the first of a series of scholarly, colour-illustrated books on selected places.” 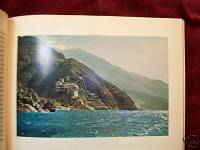