1801 – the Alexander frieze in Maroudá

Almost all paintings and fresco’s in Athos show us religious scenes: the live of Christ, Holy Saints and stories from the Bible are told on the murals. You will not find any secular images, because Athos monks focus on their spiritual life and their connection with God.

But there is one exception. Last September we visited the kelli Maroudá and we received a warm welcome of father Makarios. When I had closer look at this beautiful kellion my attention was drawn to a corridor with paintings. To my surprize the paintings did not show religious scenes, but they showed the complete life of Alexander the Great, the famous Macedonian king, who conquered his enemies in the East and who started the Hellenistic civilisation. Let’s have look: 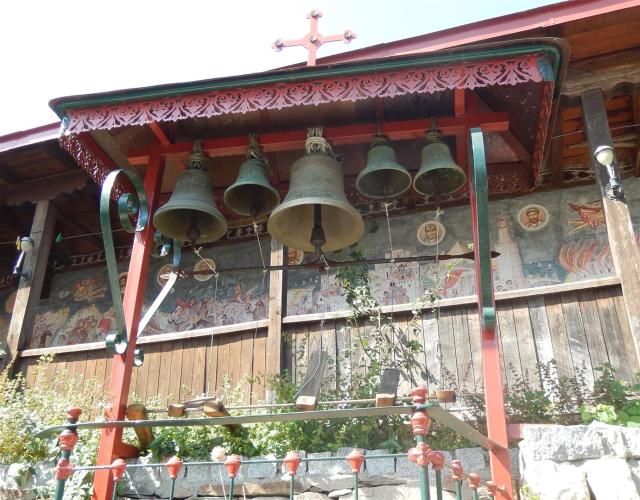 Behind the bells: the frieze with the Alexander paintings 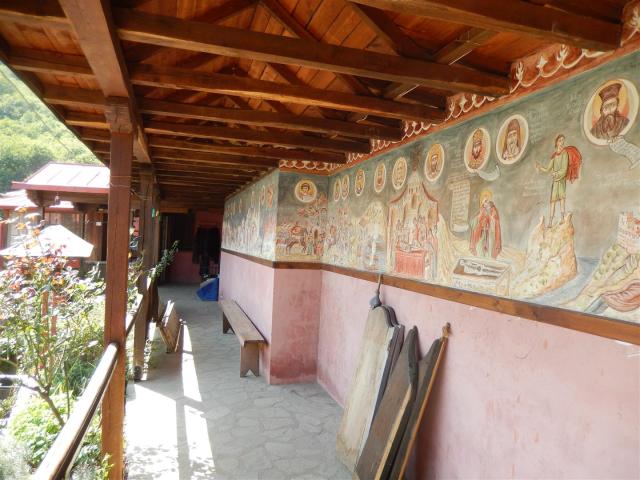 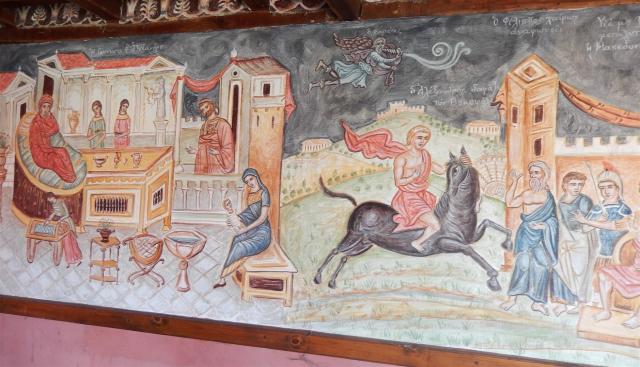 Born in Pella in 356 BC, Alexander succeeded his father Philip II to the throne at the age of twenty. On the left you can see baby Alexander in the arms of his mother Olympias. On the right Alexander rides his favourite horse Bucephalus. 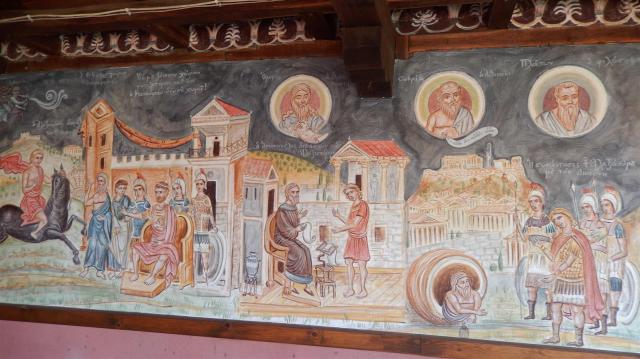 Scenes from his youth: Aristotles teaches Alexander philosophy. Above the scens you can see the people who played an important role in Greek history, like Diogenes and on the right philosopher Platon (with the Parthenon below). 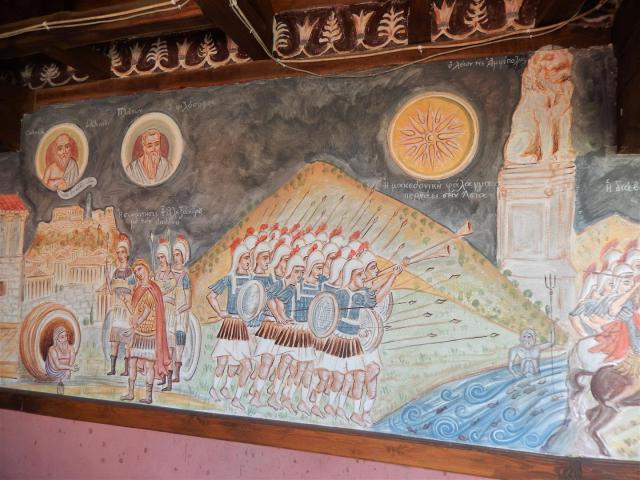 Here the famous campaign of Alexander starts: the defeat of the Thracians by crossing the river Lyginus. After restoring peace in Greece Alexander could set out on his Asian campaign from Amphipolis (see the Lion monument). 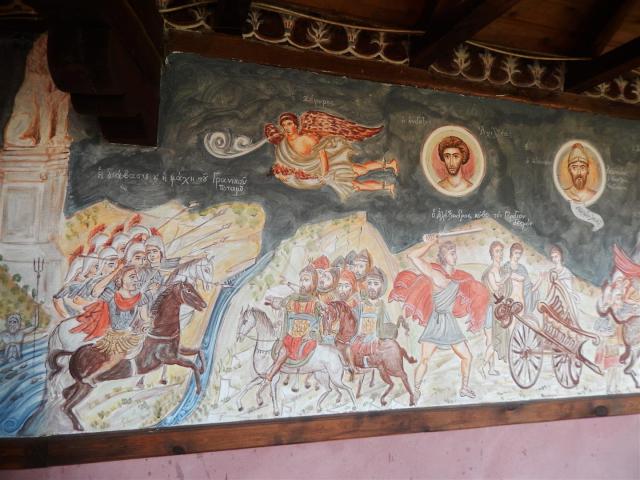 334 BC: Alexander crosses the Hellespont and he  throws a spear into Asian soil, giving a clear massage to the Persians what his intent was. On the right he  cuts  the ‘unsolvable’ Gordian Knot. 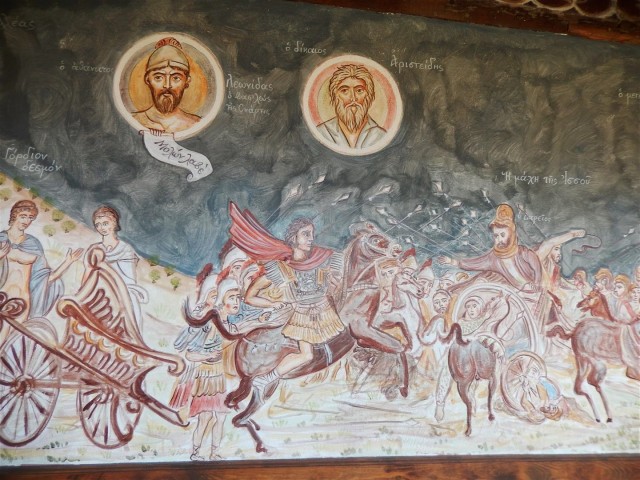 From the famous mosaic in Pompeii: the battle of Issus, battleling the Persian king Darius III. 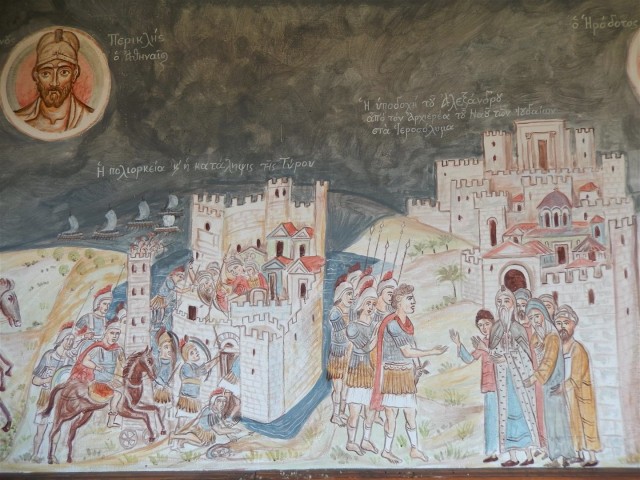 Alexander in Tyros: in the left upper corner Perikles. 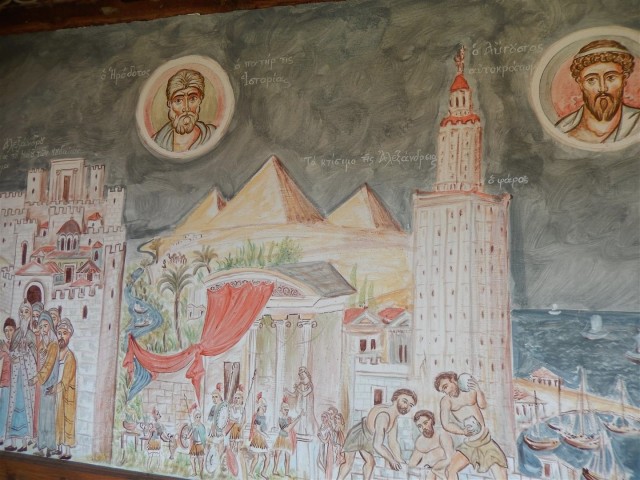 Alexander conquers Egypt (piramides) and he founded the city Alexandria, with the light house and library, which would become the prosperous capital of the Ptolemaic Kingdom after his death (with  Herodotos and Augustos in the round medallions). An extraordinary painting! 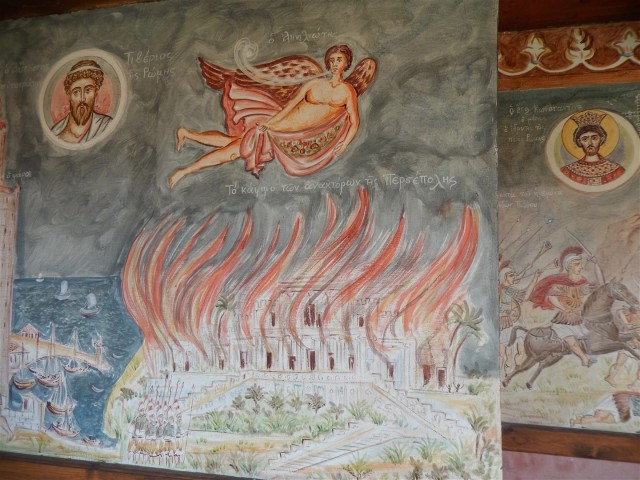 The fire in the palace of Xerxes in Persepolis: a deliberate revenge for the burning of the Acropolis of Athens during the Second Persian War by Xerxes I? 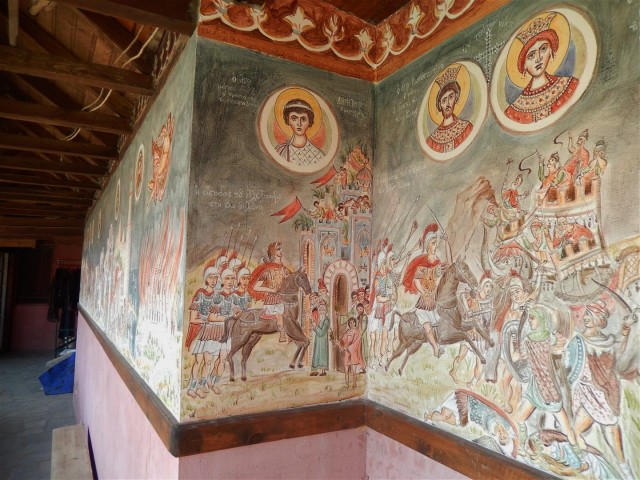 Alexander entering Babylon and a fight with elephants during the Indian campaign. 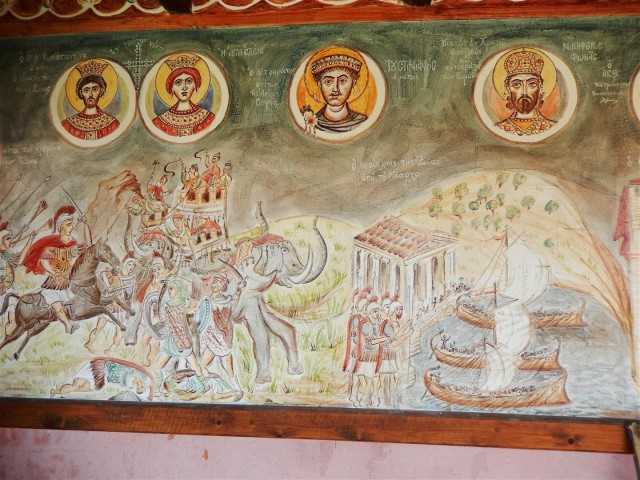 More details of the Indian campaign, with the heads of ancient Byzantine emperors above it (Constantine and Ireni, Justin and Nicephoras Phokas). 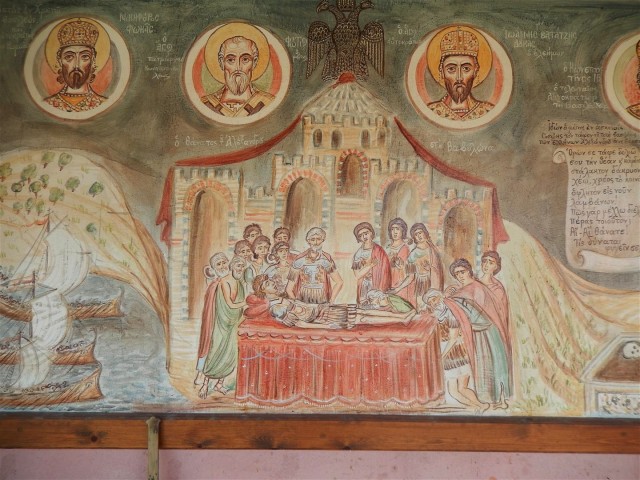 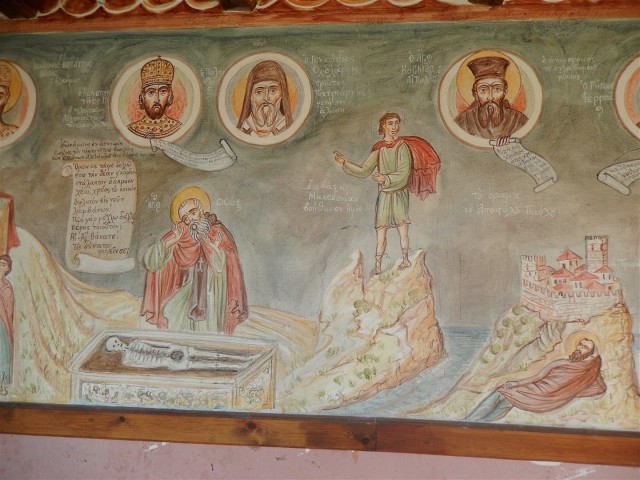 This is an interesting scene: here the ancient saint Agios Sisois from Egypt mourns at the grave of Alexander, thus ‘usurpating’ the Hellenistic culture in the Greek Christian world. Might he have seen Alexander’s grave in Egypt and is there still a chance that Alexander’s grave once will be found in the deserts of Egypt?

And here the frieze ends with the planned statue of Dinocrates of Alexander on Mount Athos and with contemporary Greek heroes.

The paintings are made in 2015: does the mermaid on the right maybe predict the boat refugees from Syria who would seek asylum in Europe starting last year? Who kowns….It gives my the opportunity to express my deep respect to all Greek people who helped the refugees, who tried to find a safe place to live in our ‘peacefull’ Europe.

Epilogue: allthough secular scenes are very  hard to find on Athos, I found similar secular paintings of Greek philosophers in a monastery in Meteora last summer! 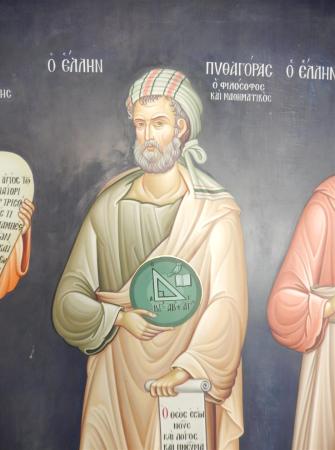 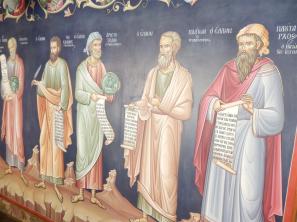 This entry was posted in kellia, trip 2015 and tagged Alexander the Great, Frescoes, Maroudá, murals. Bookmark the permalink.