A few more pictures to give you a more detailed impression of the kellion of Maroudá, which belongs to Chilandariou. The official title of the place is: “Holy Cell of the Nativity of the Mother of God”.

A nicely decorated water tap with a king fisher as a tap. With colourful flowery tiles. There are many interesting artistic expressions to be found in Maroudá. As if a more creative, individual spirit reigns here. The spirit of Father Makarios. “With real faith you have freedom. You have love.” Is one of his known quotes. Lucas Kane studied the insights of the abbot by staying there two months. His study was published in the Journal for Undergraduate Ethnography (2016, 2). It is a peculiar study. To quote him: “Sensuality becomes a lived hierophany – a manifestation of the sacred.” He describes the relation to Pavlos, his disciple as: “Two individual I’s become one Us”, a blending of individual identity, perceptions, bodies, sensitivities. Some of his elaborations might raise a eyebrow, for instance: “Looking back again to Makarios’ definition of religion, it is erotic love that guides God’s relationship to human, and in turn informs how humanity might love God; the “beloved becomes the lover as a result of being loved”.”

In the mornings you can hear wood workshop sounds coming out of this building. A very homely picture. In a small place like this, you are invited to give a helping hand. We were happy to do the dishes after dinner.

In the centre of the complex at the rear end of the church is a little ossuary, which is easy to miss. It is the photographer’s shadow that makes the skulls and bones visible in the reflection of the glass.

A dog leads pilgrim Herman through the misty morning. An enormous chimney is placed in the centre.

Another homely picture. On the left the very end of the Alexander frieze, an impressive painted wall on which important events from the life of Alexander the Great are depicted. Painted by a frequent visitor from Volos. It is quite rare to see a fresco with a pre-Christian theme on Athos. It is made only recently, it was painted in 2015. An attractive mermaid holds a ship. A soccer ball could be observed as a surprise but perhaps not rarer than a rain coat or an umbrella.

A last overview of Maroudá on our way to walk to skiti Andreou, just downhill from here.

I checked in my small Athos library, if something was written about Maroudá, e.g. in Graham Speake’s or Victoria Della Dora’s book but in both classics is not even mentioned. Recently a Dutch pilgrim, Wouter van der Toorn, wrote a few blogs about Maroudá. Grazing the internet I found an interesting speech by Father Makarios from 2014. It can be found here. 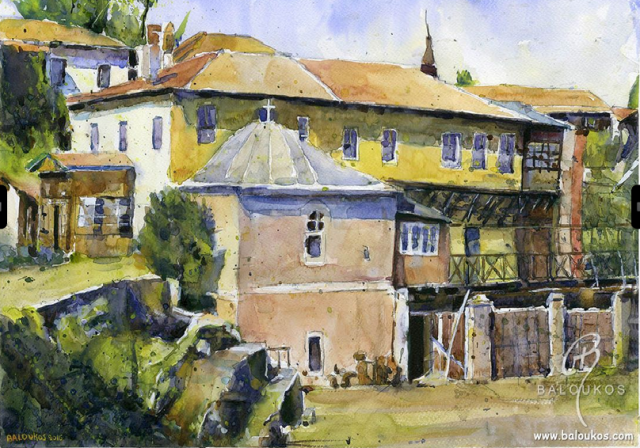 To finish this photo blog I like to show a nice watercolor of Maroudá by Christos Baloukos, also found on the internet. He has painted a lot on Athos and most of his work is for sale.

This entry was posted in trip 2017 and tagged dogs, Maroudá, skulls. Bookmark the permalink.