Posted on February 1, 2016 by athosweblog

This is the last episode of seven of the  Athos trip done by Goulven Le Goff and his brother Ivonig from Rennes, France made in May 2015. They visited all 20 monasteries in one week.
Many thanks for their exciting stories and photographs, HV + WV.

On this last day on Mount Athos, we had planned a four hour walk. We had to reach Daphni before noon to get in time to catch the bus in Ouranoupolis to the airport of Thessaloniki. That’s why we woke up before sunrise. On our way to the monastery exit, we crossed the main courtyard lightened by oil lamps, while we could hear the monks singing in the katholikon. An impressive moment!

At night, the path between Konstamonitou and its arsanas is quite dangerous, because of huge gaps at the side of the track. We had to be very careful. 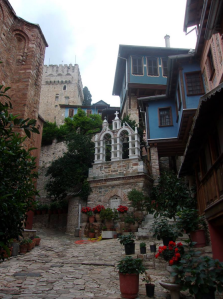 We walked while the sun slowly rises and reached the coast. The first monastery we encountered was Dochiariou, with its typical architecture. 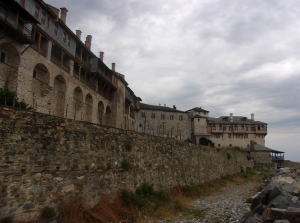 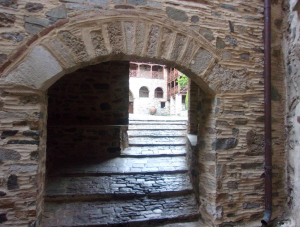 One hour, later, we entered Xenophontos, perhaps the monastery my brother Ivonig liked the most. 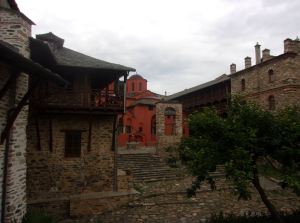 The former and the present katholikons of Xenophontos. 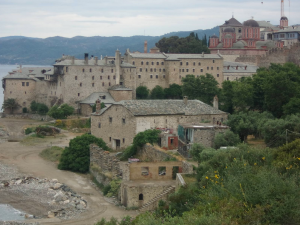 Contrary to the view on Xenophontos from the hill, the one to Russikon or Panteleimonos is not that beautiful: we walked mainly a dirt road under the pouring rain.

We were impressed by the size of the buildings surrounding the monastery of Russikon, built for pilgrims and storage. It looked like the authorities decided to cover every roof of these buildings with slate (in French: lauze) which is way more beautiful than the former green stuff on the roofs. We encountered many people working on this project. 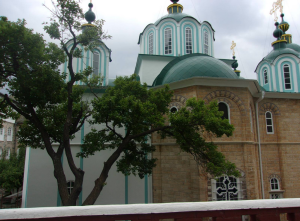 Here are some impressions of the inner courtyard of the Russian monastery.

As we tried to find the path from Russikon to Xeropotamou, we ended in a field fully covered with the items you can see on the photo, most probably wind turbines. It looked like Russians destroyed the path to build them, because at the other side of the field, in a track consumed by vegetation and almost impossible to walk in, we discovered old hiking signs. We continued on this hard way, struggling to move on; our tenacity payed when we finally discovered a beautiful cobbled road climbing to Xeropotamou.

The rain turned in a downpour when we ended our climb in Xeropotamou. It opens only at 10:30PM so we had to wait a little before visiting it.

From Xeropotamou, we enjoyed a nice view on our final goal, the port of Daphni. The descent to get there in the rain was really hard, because of the sliding pavement. We expected to rest a little before taking the boat, but we made the mistake not to book our ticket in advance, so we had to keep standing in an excited crowd to buy it. Not the best moment of this magnificent trip!

This entry was posted in 08 Xiropotamou, 10 Docheiariou, 16 Xenofontos, 19 Panteleimonos and tagged Le Goff. Bookmark the permalink.