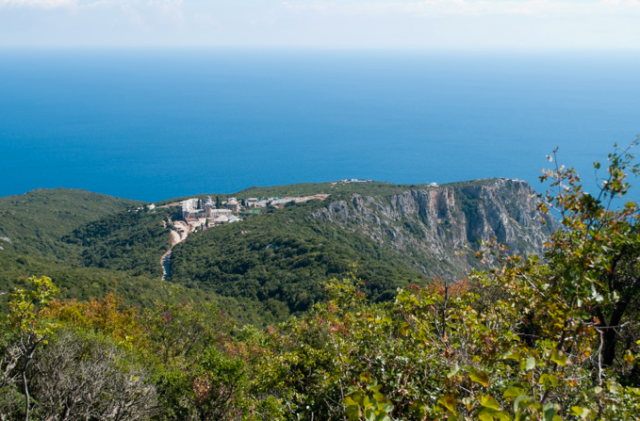 Walking from Nelios to Prodromou the footpath rises from the stone fall of Karavostasi to approximately 450 meters above sea level. At the highest point there suddenly is a wide view of the south eastern end of the peninsula. Below in front is the Romanian Skiti Prodromou (meaning: saint John the Baptist, the Forerunner).

Here is a closer look at the complex with the sea as a backdrop. Despite the sheer size of the settlement it never got the status of a monastery. It is a still a skete, despite all the efforts by the Romanian community. This first Romanian skete on Athos is there since 1855, so relatively late compared with the monasteries. There is quite a bit of restoring going on in September 2013 especially near the entrance area. Above the vegetable garden, right of the complex, there is quite a large field of solar panels to harvest the abundant sun power.

A view from the court yard. The peak of Mount Athos is gently touched by a bright white cloud.

In the kyriakon (the name of the Sunday church of a skete. Churches belonging to a monastery are called: katholicon) there is a lot of colored glass laid in wood. 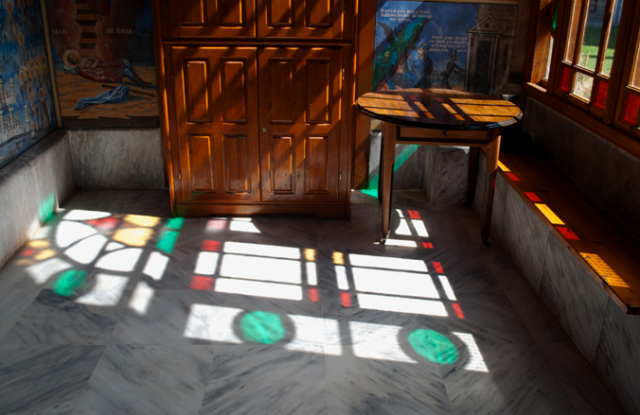 On the other side of the exonarthex there are plenty of rather cruel wall paintings to be feared. Many of the frescos are quite bloody. In a diversity of scenes arms and legs are chopped off or the human skin is peeled off. These stories remind us of the price many Orthodox had to pay for their firm beliefs. The aggressors look mostly Roman or they are devilish. The frescos form a parade of martyrs of Orthodoxy.

The spiritual ladder the monks have to climb before reaching paradise, the ladder of Saint John Climacus. There are lots of temptations to be conquered and rather offensive devils to be dealt with. Some of the monks don’t succeed and end up in the flames of hell. The picture warns the monks to stay focused on taking the next step on the ladder.