516 – old pictures of the Serail or Skiti Andreou

A drawing of the church of the Serail after its opening on june 16th 1867 by Tsar Alexander II Alexandrovitch. 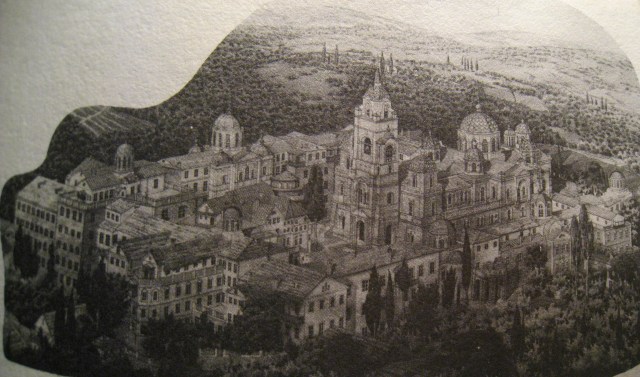 And here a historical picture of the Serail on 5th of july 1905 (Feast of Athanasius): in front of the trapeza numerous monks sit in the courtyard and have their meal in the open air.

60 years later this sad picture is taken: the last surviving monk in the summer of 1965. Soon after he died and the Serail was handed over to Vatopediou, the owner of the land of Skiti Andreou.

This picture is from september 2th 1908, with the Archimandrite Seraphim of the Serail. At that moment the power of this settlement was at its height. The picture is made by the “house-photographer” of the Skiti.

Is this person maybe the same as the one who was burried in courtyard, as shown in post 515 ?
All pictures are from the book: Athos – Vorhoelle zum Paradies / Erich Feigl – Michael Epp (photographer), Paul Zsolnay Verlag – Wien Hamburg 1982 ISBN 3-552-03400-5. Many thanks to them.
Wim, 16 july

This entry was posted in Skiti Andreou. Bookmark the permalink.