In post 2018 I showed you the pictures from Athos made in the Second World War by German soldiers. The photo’s  triggered me, not only to find the German flak position somewhere above the hills of the Prodromou area, but also to see the arsanas of Prodromou. This spot on the Holy Mountain is visited very rarely, let alone that photos of it are known to the public. So my main goal of my 12th pilgrimage to Mount Athos in August this year was to pay visit to this remote place.

Before I will show my pictures I have thank monk T. from Simonospetras, who was so hospitable and generous to drive us around for a day to go (in 1,5 hour from his monastery) all the way to the arsanas (and many other places, which I will show later!).

This is picture from the arsanas in WWII. The arsanas building is still intact.  This is how it looks in 2018:

The roof of the arsanas building has disappeared. The building on the hill above is in ruins. Furthermore the building (?) on the far left of the old picture, that stood on the rocks near the surf is totally gone. 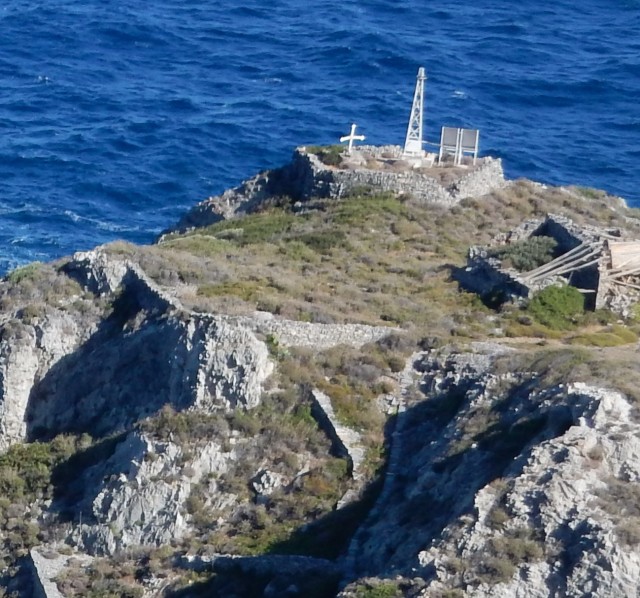 Let’s have a closer look at the arsanas, but first I will show you the (dangerous) road we had to take with the four-wheel drive Jeep. This is the road we had to go (detail from the Howorth map). 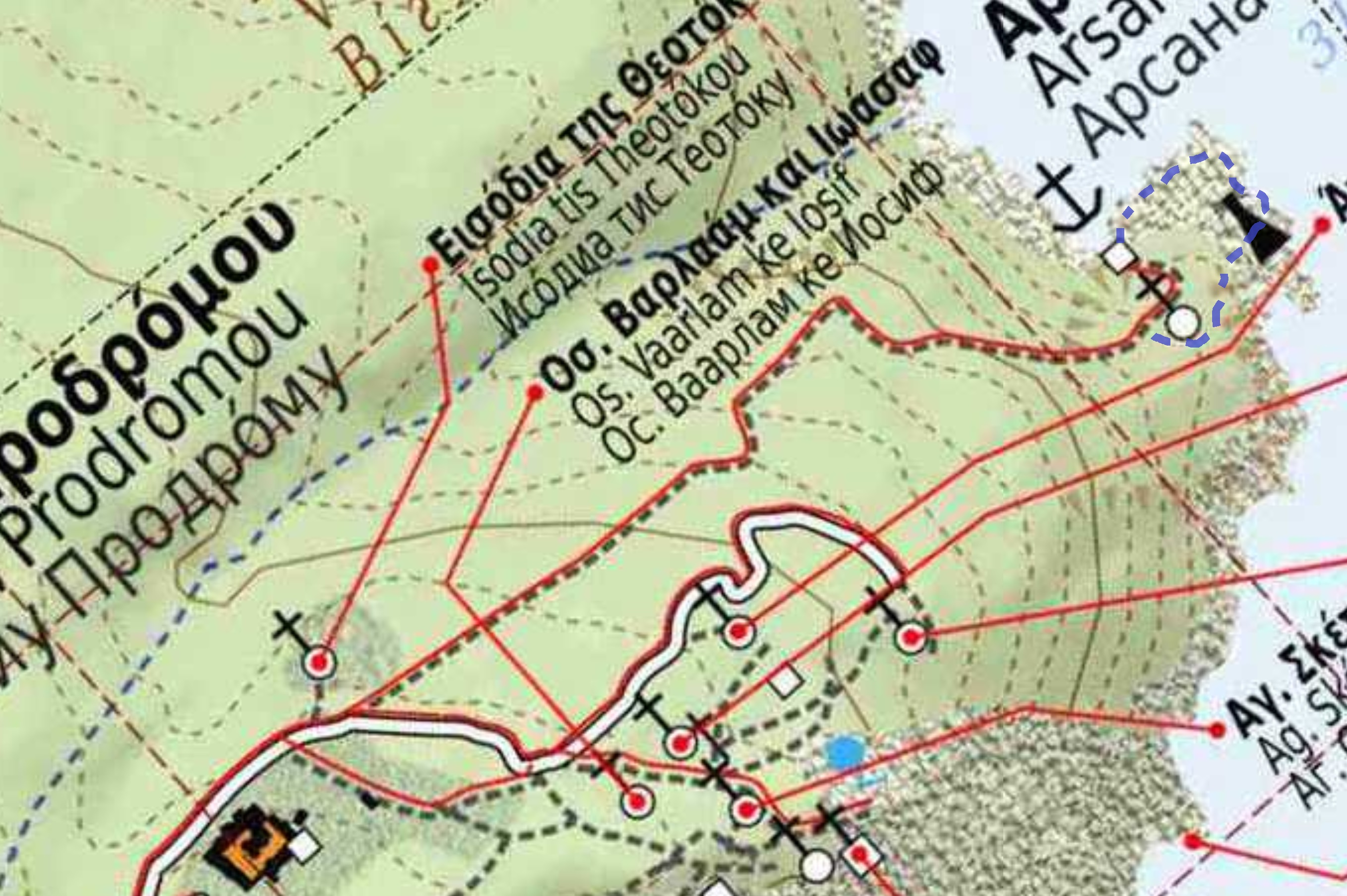 Not far behind the Prodromou skiti a small road goes down, where only one car can pass, because it is very narrow. If you go down the only place where you turn the car is at the end of this steep dead end street. This was without doubt one of the most exiting trips in a car I ever made. A few hundred meters before we reached the end monk T. asked us to get out of the car and to explore the road (not knowing if there was a place to turn the car!). I added the kalderimi that leads from the ruined house and parking spot to the arsanas with a blue line. The arsanas itself cannot be reached by car.

Although this picture is not sharp, I want to show how we checked the steep road on foot, before going down by car to arsanas Prodromou. 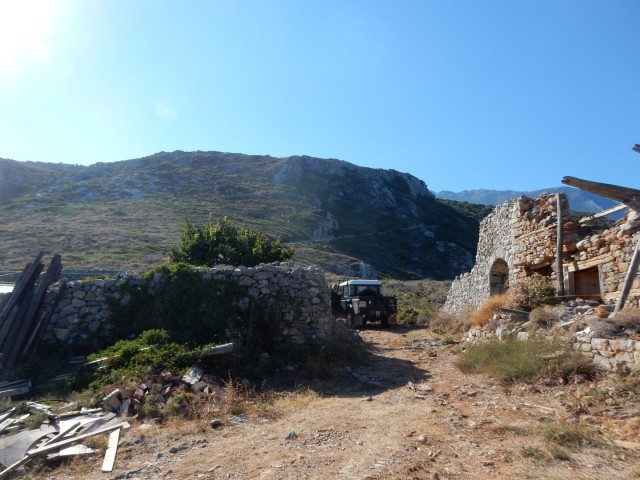 At the and of the narrow road: a place to turn the car and a ruin of a house 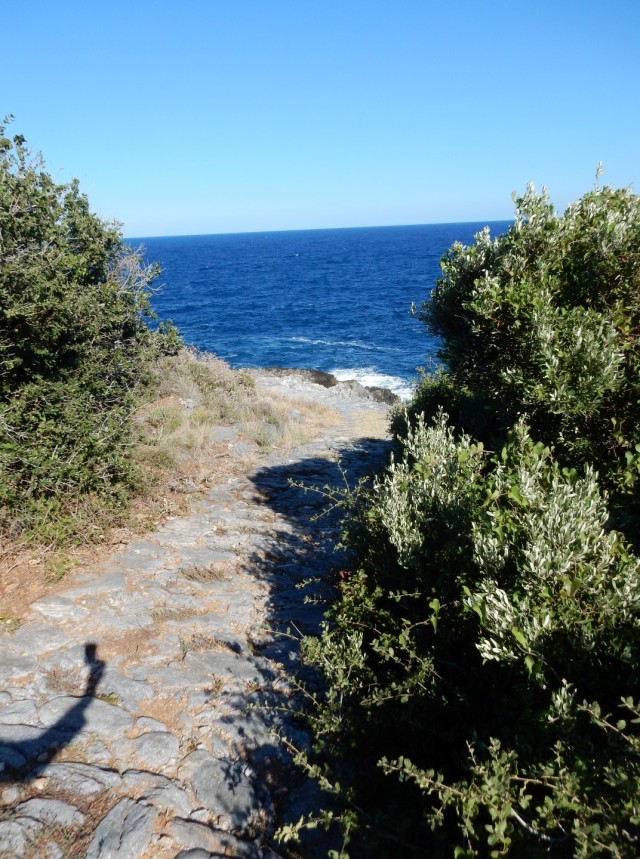 On this rocky spot close to the coastline the remains of walls are visible. On the photo from the WWII you can still see a house (?) standing on the place.

The path continues to the harbor. The familiar Athos warning sign with the faded text is also to be seen here…

Here the arsanas is in sight, while rough waves batter the rocks.

The arsanas with high waves flowing in, with boathouse cut into the rocks in the background

Waves rolling in, seen from the other side

The boathouse seen from the inside, with the sad remains of plastic bottles and styrofoam boxes 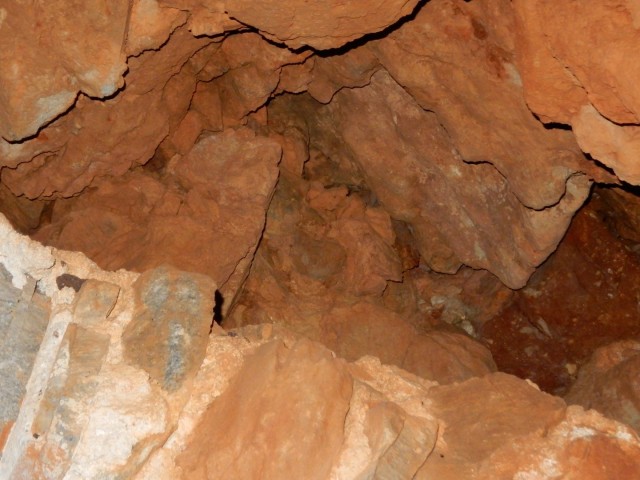 At the end of the tunnel: the made made walls stop here and bare rock showes up

The place behind the wooden door in the far end is still in use and locked:

Behind the wooden door: a rubber boat, tools and other things 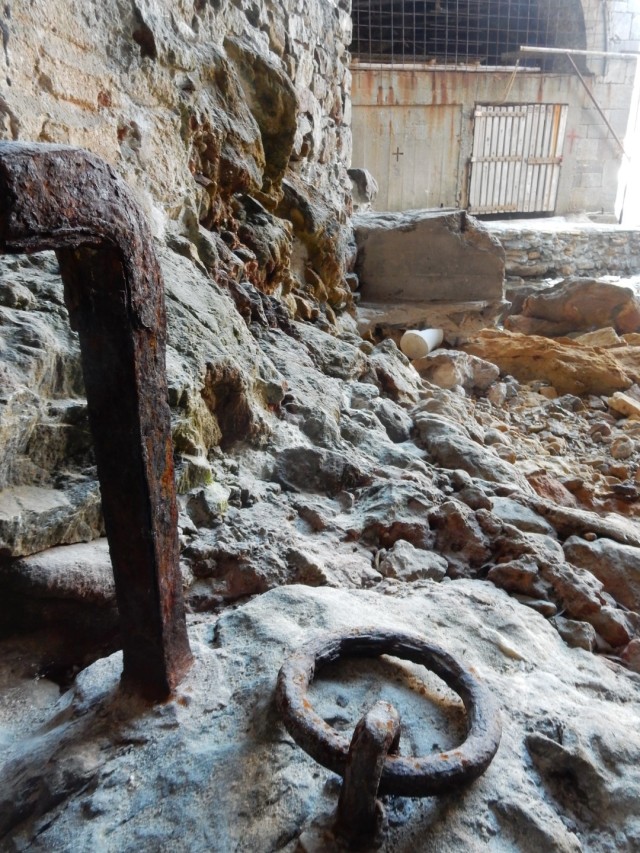 A weathered and rusted iron ring and pole

Rusted chains hang from the ceiling 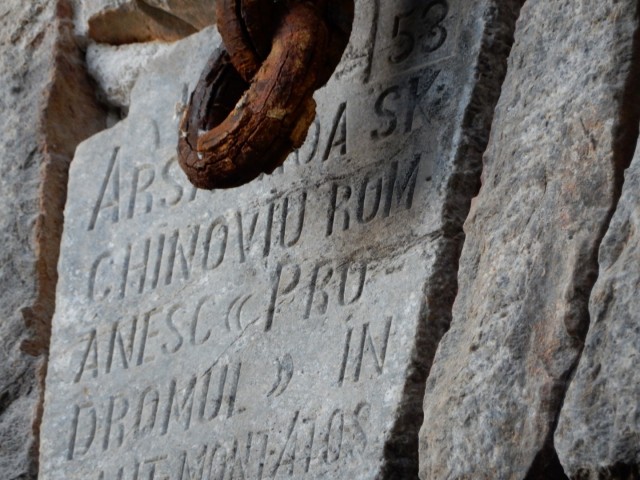 Above the entrance of the boathouse: a stone from 1853 with tekst: “The arsanas of the Rumenean skiti Prodromou on the Mount Athos”.

Old tins in a plastic basket 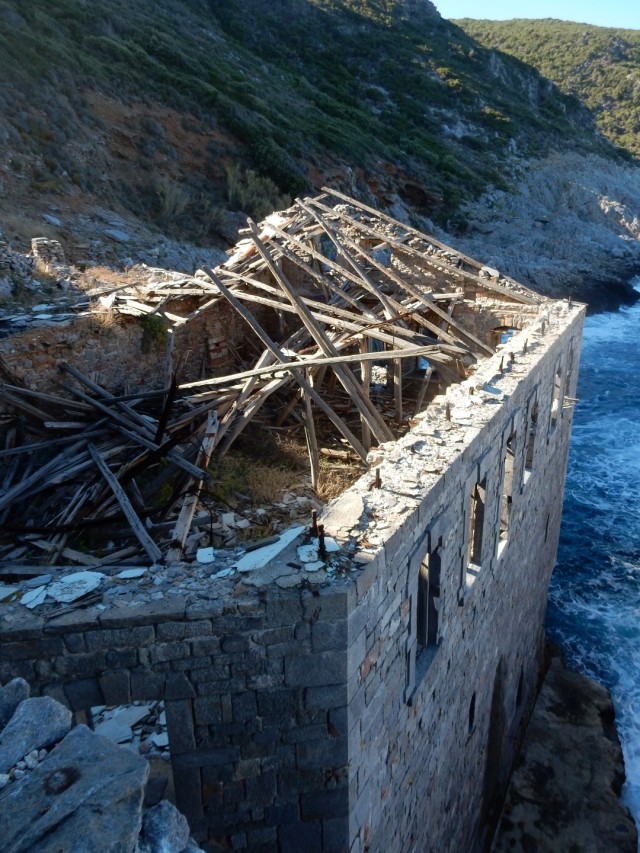 The collapsed roof of the building next to the harbor

The wall of this building

The narrow road going up: pilgrim Jitze checks the road in front. 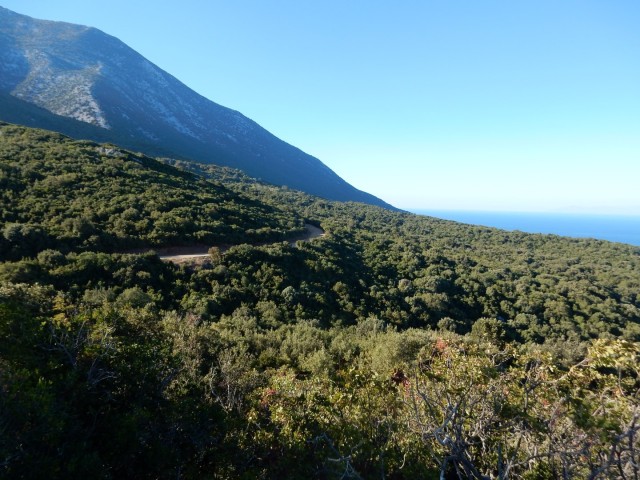 On our way back to Prodromou: the desolate landscape in the direction of Lavra. No trees are to be seen, only low vegetation and bushes, probably because of the strong winds that blow here throughout the year. 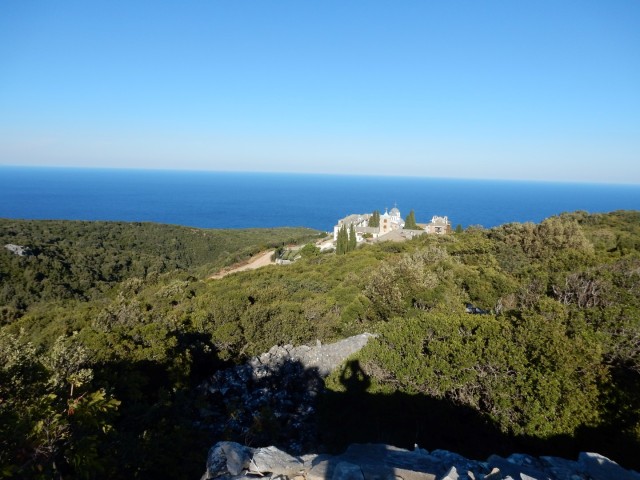 Back at skiti Prodromou: seen from the place that might have been the German flak position, but this a subject for a next post.

PS. for a funny story about a wind-surfer who sails around Europe (and Athos!) and who found shelter and slept in arsanas Prodromou, have a look here, thanks japetus-gr. 1-12 Wim

This entry was posted in arsanas, nature, Prodromou. Bookmark the permalink.