According to the planning the next leg of our pilgrimage would bring us from Megistis Lavra to Nea Skiti.

Directly from Lavra starts a monopati. Soon the monopati transfers to an open road made of concrete plates. But luckily after 800 meters the old monopati works its way up in almost a straight line, from nearly sea-level up to 500 meters. The hike is very enclosed due to dense vegetation. There is hardly a view on the surroundings. Just before the big wooden cross on the southern ridge, a panoramic view opens. (*see below)

Here we see Skiti Prodromou from that high perspective, in the morning light. The vast skete looks almost a symmetrical from this perspective. We see two monks standing in the gate. We see some workers near the trucks. The cypresses give a beautiful dark contrast. The sun glitters in the sea. I have written before about this point of view, when we travelled the other way, from Kafsokalivia to Prodromou, in 2013. 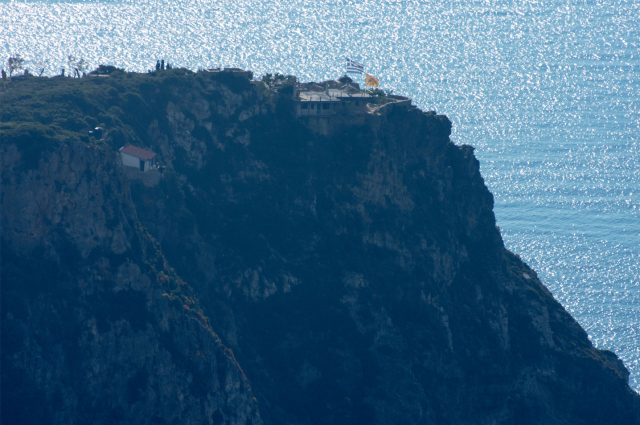 From the same perspective you can also see the very end of the peninsula, an area called: Akrathos. There we see an enormous Greek flag and the Byzantine flag (the yellow one with the two-headed eagle). It is the kellion where the monk Iosef lives who likes to wave the Greek flag to greet pilots in fighter jets who pass close by. He has even been given a pilots suit. (Watch the You Tube film with Iosef waving the flag to Phantom jets. Adjust the volume. The music is very loud.) Father Iosef lives on the edge of the holy world, about 200 meters above the sea.

Just below, in the abyss, laya the famous cage of Athanasiou, the founder of the monastic life on Athos.

On this Russian fresco we find Athanasiou and John the Forrunner (Prodromou) together. 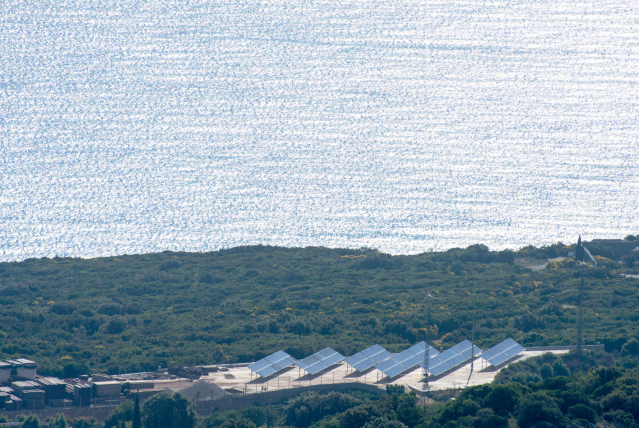 A large field of solar panels is installed not very far from Prodromou. Some windmills can be seen as well. So good to see how much effort is put into sustainable energy on the Holy Mountain. So the monks will always have all the electrical energy they need to for fill their tasks now and in the far future.

The point of view where these photo’s were taken is called Tavrokalyvo. The distance from this point to Podromou in a straight line is 1200 meters. The path from Lavra is clearly coming from the north and makes a turn to the right at the red star in the direction of Kavsolalivia and Sk . Anna. The zig zag path downhill to Prodromou is also visible.

This entry was posted in Prodromou, trip 2017 and tagged Akrathos, energy, solar. Bookmark the permalink.