In November 1944, three New Zealand servicemen (here two of them on the photo in front of Paulou monastery HV) went to Mount Athos in northern Greece, to present citations to various monasteries whose inhabitants, in spite of serious risks to their own lives and safety, had been instrumental in caring for New Zealanders during the SecondWorld War.
Peter Howorth recently discovered in the archives of Radio New Zealand, a hitherto unplayed recorded talk. This talk, by one of the group, Peter McIntyre, Official War Artist, had been recorded on New Years Day, 1945. He also discovered 83 photo’s of this trip in the National Library of New Zealand. I will show you the most interesting images with parts of the transcripted text from the talk.

“I have been to a lot of queer places in my time; pocket republics like San Marino in Italy, Andorra in Spain, places like Monaco, but last month in northern Greece, I found one of the strangest of them all. A peninsular virtually cut off from the outside world, a state virtually self governed, strange, mysterious and beautiful, a place of some 8000 inhabitants, where there are no women, no roads and, incidentally, no advertising. When you come to think of it, rid yourself of those two things, women and motorcars, and most of life’s complications and worries disappear immediately.

We went by jeep across country, through villages where they gave us roast pork and a fiery drink called ouzo – as far as even an army jeep could go, which is something. We saw the remains of the great canal that Xerxes tried to cut across the peninsular some 200 years before Christ. When the jeep gave up, we hired a fishing boat and we sailed along the coast. It was lovely. The water was like glass, and you could see the starfish far below, with Mount Athos looming up away ahead out of the haze. Lying on deck in the sun we passed the last village on the coast (Ouranoupolis, second photo. Panteleimonos on the third photo HV), and there the fishermen pointed out the Frontier guard. 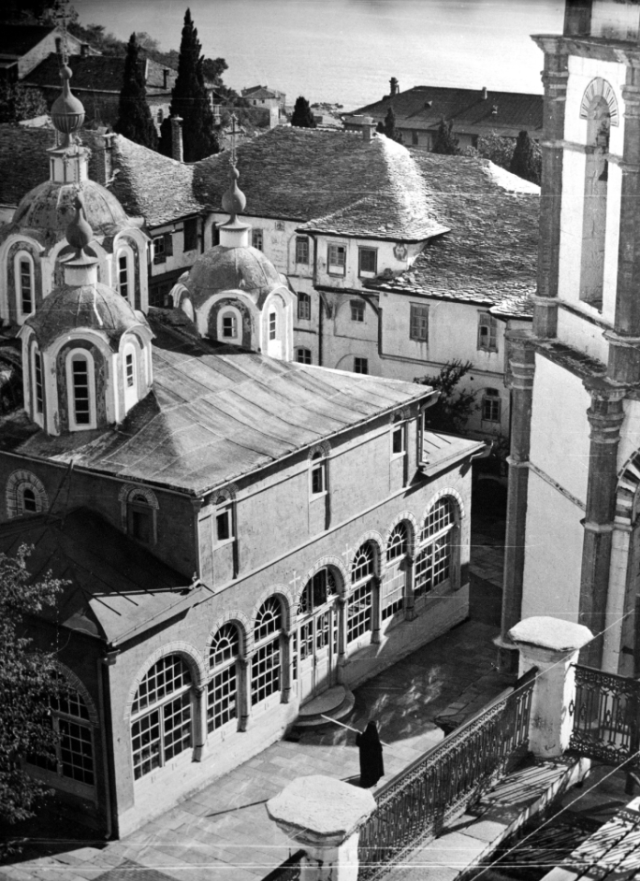 The church of Panteleimonos HV.

We put in that evening at a tiny harbour below the great monastery of Saint Paul (Paulou) and, as we climbed up the path, the monks came down to meet us. High black caps and robes, long hair and beards – strange looking fellows. My first shock was to find them not gloomy and solemn, but gay, even hearty and back-slapping. “Welcome, welcome!” they kept repeating. They are intensely royalist and pro-British. “Greece must become a British colony!” was one of the first things they said to me.

Eventually they realised from our shoulder flashes that we were New Zealanders and immediately chaos reigned! They all wanted to ask us at the same time how ‘Thomas’ was. ‘Thomas’ being Colonel Sandy Thomas of 2NZEF who, after escaping wounded from a German prison near Salonika, was sheltered and nursed by these monks. As they did with several New Zealanders and hundreds of British escaped prisoners, these monks eventually got Col. Thomas away by boat to Turkey and freedom. They were frequently searched by the Germans but always managed to hide the soldiers in the forest around the monasteries.

By boat again the next day, around the coast past the hermit huts. These hermits live all alone, each in a tiny cabin clinging incredibly to the cliff face high above the sea.
A storm forced us ashore at the cape and we climbed on foot to a Romanian monastery (skiti Prodromou HV) where they fed us on raw salt fish, wild honey and brown bread, in a room strangely enough hung with gaudy old lithographs of battle scenes.

At Lavra, wealthiest and oldest monastery, we saw a whole library of ancient manuscripts. Priceless things, dating back to about the fourth century. Preserved there is the whole history of the Byzantium Empire.
In the courtyard, a beautiful peaceful courtyard, was a huge tree that, by the monastery records, will be 1000 years old in 13 years time. 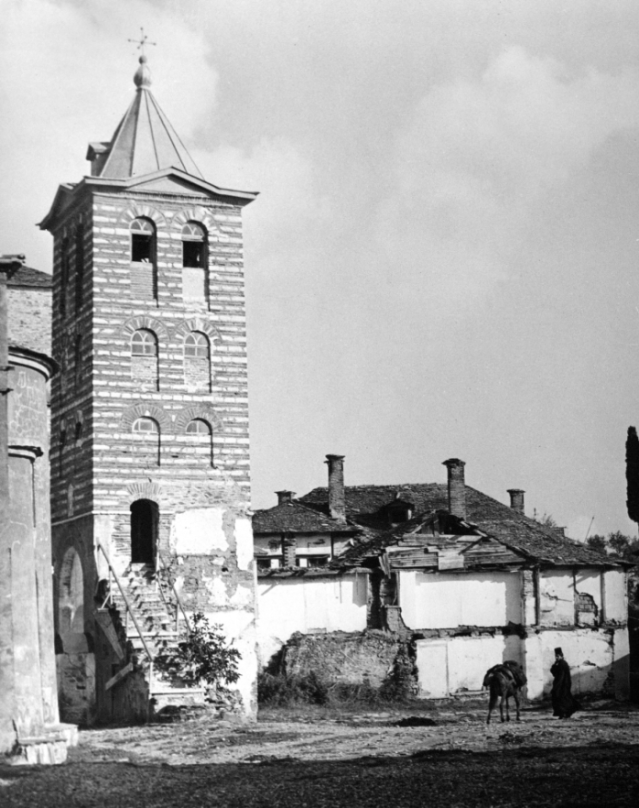 After another long journey by donkey, we reached the capital, Karyes. Surely one of the strangest in the world. Streets and shops and guesthouses, hostels and churches, but no women, no motorcars, no shop signs, no street signs. By law no shopkeeper may put up his name or any other sign. You may not even ride your donkey through the capital, you must dismount and walk. 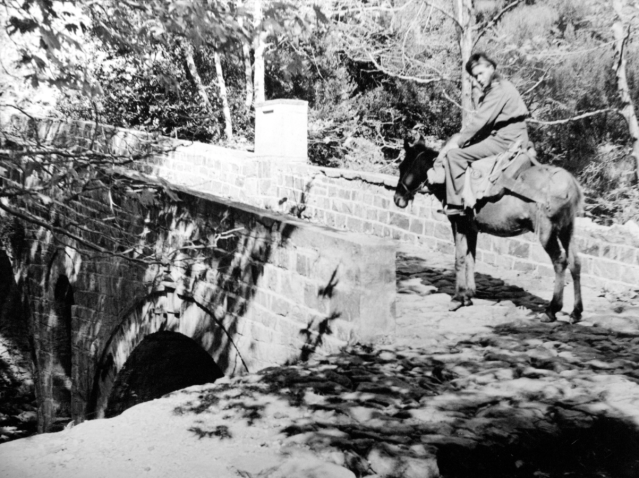 The committee or parliament meets in the capital – one representative from each monastery. We were awakened at 6:30 in the morning by our own time to meet the representatives. Think of it – parliament in session at seven in the morning! We had had no breakfast – the monks only eat two meals a day, and when we were marched in with great ceremony around came the trays of ouzo – at seven in the morning in parliamentary session! It was almost too much! After many flowery speeches we bid farewell, and lead our donkeys off through the strangest of capitals. We rode down to the coast and to our fishing boat with a feeling of coming out into another world. So it was farewell to Mount Athos, land of no women.

We drove next day to Salonika, and there in front of a hotel was a woman, a little Australian Red Cross girl we had met on our way through. Her name was Penny. “Penny,” I said “you have no idea how glad I am to see you!”

Many thanks to Peter Howorth, publisher of The Athos Map,  who gave us this remarkable story.

Listen to the complete talk here. or watch the You Tube film of the story.