1949 – Tsipras, the avaton and other politics

Posted on November 7, 2017 by athosweblog

According to a Flemish website, called Kerknet, the avaton on Athos is threatened by a Greek law considering gender (October 15th 2017). The avaton is the ban of women on the Holy Mountain. 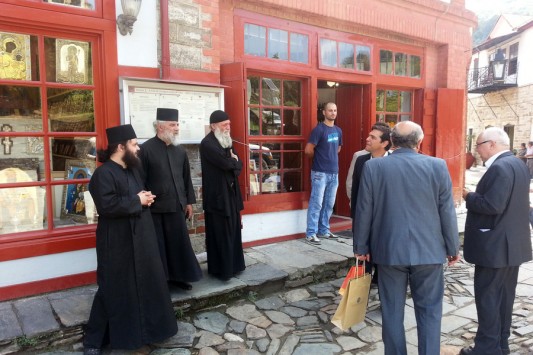 But more recently, in the end of September 2017, the Prime Minister of Greece was refused access to the Holy Mountain, so states the Greekreporter.com.  The refusal to welcome him was because Tsipras declared himself an atheist. The monks didn’t want to greed him as a PM, but only as a private pilgrim. In the end Tsipras cancelled the visit due to a “busy program”. Probably the arousal about the new Greek gender law played a part in the background.

Now there seems to be an even more serious problem. The legislation on the gender law already went through the Greek parliament. The Guardian writes on the tenth of October, that “Greece’s leftwing government has passed legislation enabling citizens to determine their gender identity amid fierce condemnation from the Orthodox church and accusations the law would “destroy human beings”.”

So women could, if they consider themselves man, have their registration changed without an operation. And with that registration the women would have the right to access the male world of Athos. As I understand it the law would be relevant to a very tiny group of trans people that want a sex registration compatible with their feeling. I just can’t imagine that this law has a further implication to get  general access to the Holy Mountain.

But the monks are not so sure and very much afraid the law would break the avaton. According to the Telegraph: “The heads of the monasteries wrote a letter to the Greek government, expressing their concerns over the consequences of the new law.

“In light of this legislation, we are full of unease as to what the future holds for us,” they said.

“It is another violation of God’s law, just like existing legislation which permits cohabitation agreements between same-sex couples. If we do not resist, then our ancestors will rise from their graves.”

This entry was posted in people, women and tagged avaton, famous pilgrims, Tsipras. Bookmark the permalink.

1 Response to 1949 – Tsipras, the avaton and other politics