It is called the Way of the Bey. The monopati from Chilandariou or from Esfigmenou to Karyes and further. The monopati leads over the hilly ridge. We had plenty of meetings with the Athonian fauna, that special day in May. For us it became the day of the Animal Kingdom. We started early and went without breakfast. We decided to climb to the ridge first, have a break and breakfast after we had gained some height. Jaap had made a spectacular, miraculous, recovery during the night. He could walk again. Earlier, in Thessaloniki, in the Hagios Demetrios, we had bought a little silver plated punched image  of a leg, that already guarded us.

This is the spot where the monopati from Chilandariou (not on the map above)  and from Esfigmenou merge for the ridge walk to Karyes.

When the monopati runs into a dirt road we saw wolf claws. Our Wolf Proof. See this earlier post on the weblog. I am still proud about that amazing discovery of a wolfs footprint in the mud. Pilgrim Herman walking on the monopati close where we found the wolf proof. The weather was quite unstable. There was rain in the air. 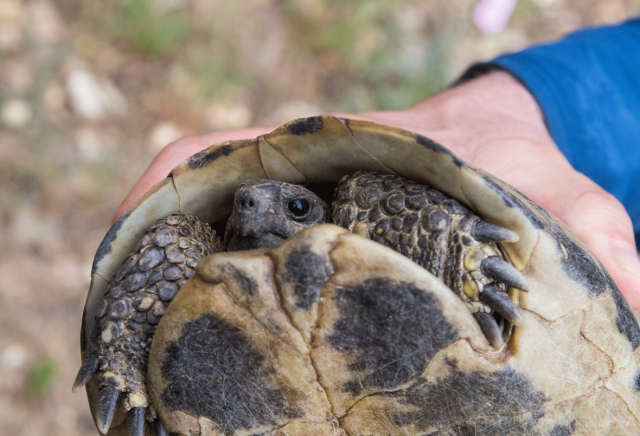 We found a turtle. The first turtle of the day we would encounter some more. We took a good look at each other. It was a Greek Land Turtle (Testudo hermanni) with a shield like a German Stahlhelm. They will probably survive us, they can become 100 years old. They are on the red list. 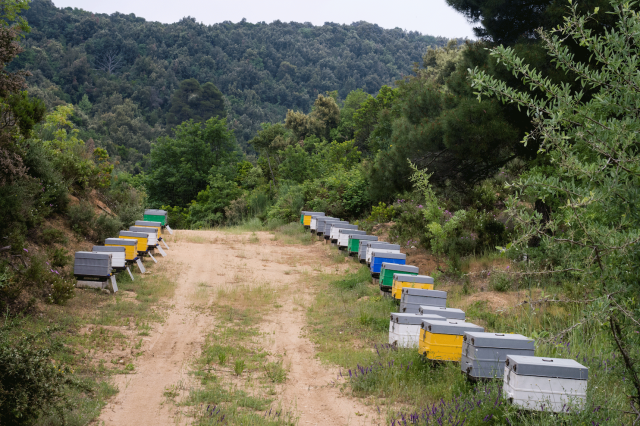 Colourful beehives along the dirt road. The boxes gave quite a modern and professional impression. It probably belongs to the monastery of Vatopedi. Our next meeting with the animal kingdom was an encountered a viper. Two of us walked just by not noticing the snake. Only the third discovered it. It was only 20 centimetres from the path. At first we thought it was dead. It didn’t move and didn’t react to our appearance of noises. We stood with the four of us around the creature. It had a big belly. It lay in the sun digesting its prey. I touched it gently with my walking stick, just to provoke a reaction. Then it briskly and aggressively rose and looked around. But soon the flight mode was stronger than the fight mode and it went crawling into the bushes.

A closer look at our snake. Providence was on our site. We were lucky not to step on the viper and being bitten. We were quite far away from anti-poison.

A camouflaged turtle on the monopati. Its protective colouring is impressive, it merges into the landscape. How many more creatures hide there?

This entry was posted in nature, trip 2017, walking and tagged beehives, snake, the way of the bey, turtle, viper. Bookmark the permalink.