Herman has already shown some of the oldest pictures of Athos by Ernest de Caranza & Emile Charles Labbé. The pictures were taken in the year 1853. Today we will focus on some of their early images from Simonos Petras. Look for the differences compared to some recent photos from 2015. A mere 162 years between the scenes. Imagine the quiet life then without internal combustion engines. No noise from cars. No motor boats, no mopeds, no chain-saws, no aircrafts. That noise machine was invented much later in 1876 by Nicolaus August Otto.

The steep ravine under the complex is even more impressive because of all the ladders on the rocks. They are placed in a chaotic way as if raiders were bound to invade. The impressive aqueduct is clearly visible from this sea side. The gardens under the fortress seem non-existent yet.

Nowadays the aqueduct is hidden behind a number of new blocks right from the main building. The terraced garden is now well kept.

The view from behind the monastery with the aqueduct on the left and the entrance gate. An almost grim medieval block on the top of a very steep slice of rock. 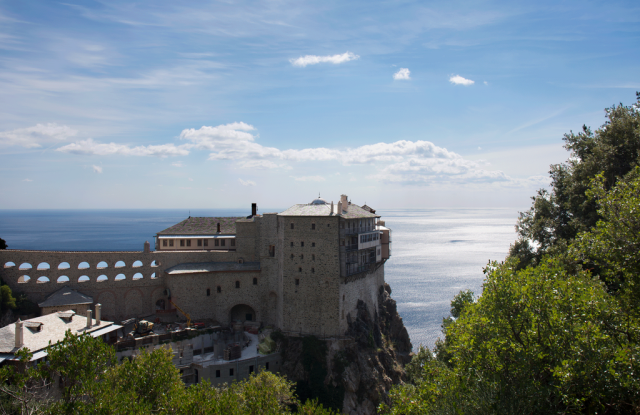 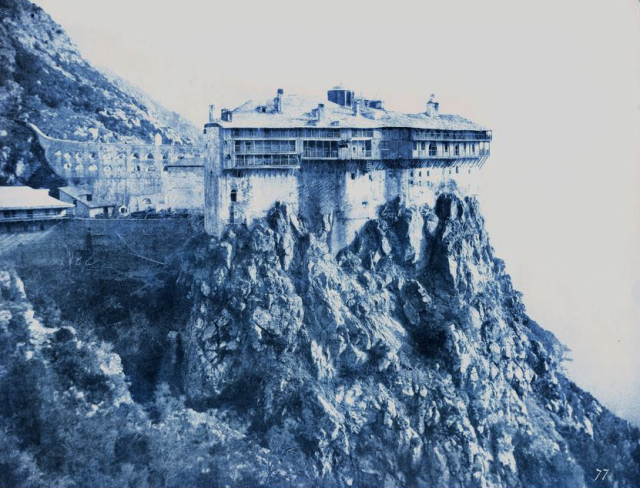 The negatives are numbered. This one has number 77. We found many more negatives. I turned them into positives. We will show some of the positives in the times to come. It is amazing that all these negatives where shot on Athos just 13 years after the invention of the calotype process by the Englishman William Fox Talbot in 1840. It underlines the significance of the Holy Mountain.

This perspective on Simonos Petras matches nicely with a slide by Raymond Geldermans. The monastery looks arisen from the marble. The rocks embrace and lift the structure. The rocks look like flames. Geldermans took this picture during his pilgrimage in January 1992.

This entry was posted in 13 Simonos Petras and tagged 1853, acqueduct, historical pictures, old and new, vintage. Bookmark the permalink.