Today we take a closer look at this extraordinary building (letter J on the plan – see last post 1849). Most visitors pass this building and don’t pay attention to it because it’s old, partly in ruins and it has been closed for public as long as I know. But last year I noticed that behind the building renovation activities were carried out, so I decided to have a closer look and I climbed the white stone stairs, that lies besides the red coloured wall. This is what I saw: 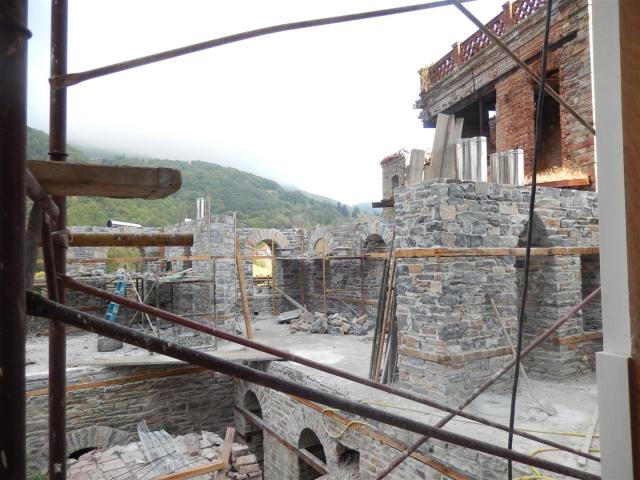 I did know if it was permitted to be here, but because nobody saw me, so I took the opportunity to sneak into the chapel, where I found this:

To my surprize the walls of the chapel were completely decorated with paintings, which is unusually for Russian churches (on Mount Athos, where the interior mostly is white)! The paintings and the rest of the interior – the iconostasis – were also being renovated. Here are some more pictures of the wall paintings: 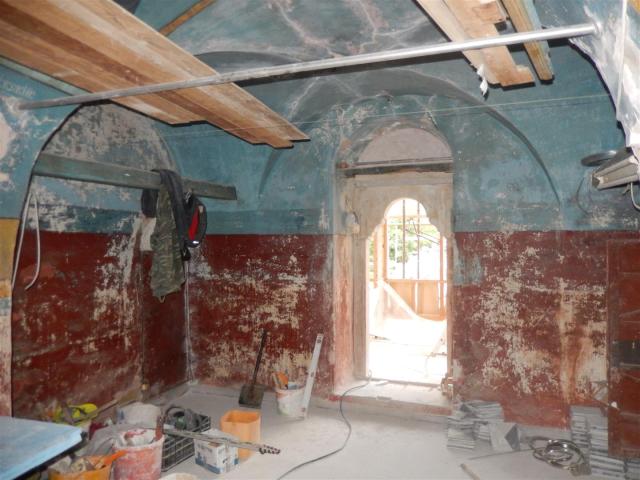 Through this door I entered the building.

Details of the Northern part of the chapel, with apostel Marcus and Saint Antonin .. on the left side.

Details of the South part of the chapel, in the direction of the main gate, with Saint Matheus above the iconostasis. 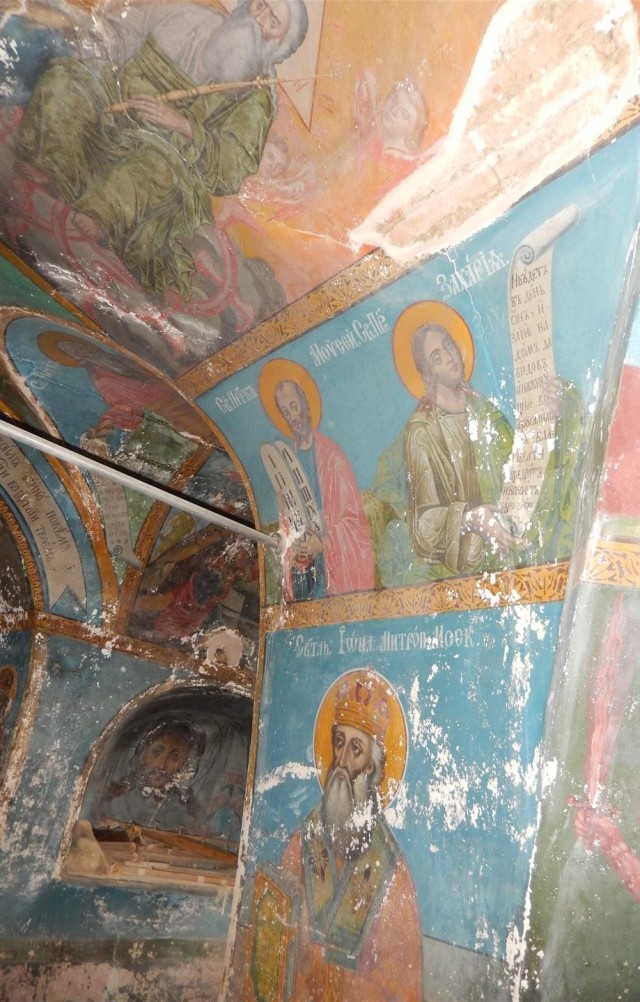 Above on the ceiling: image of God the Father 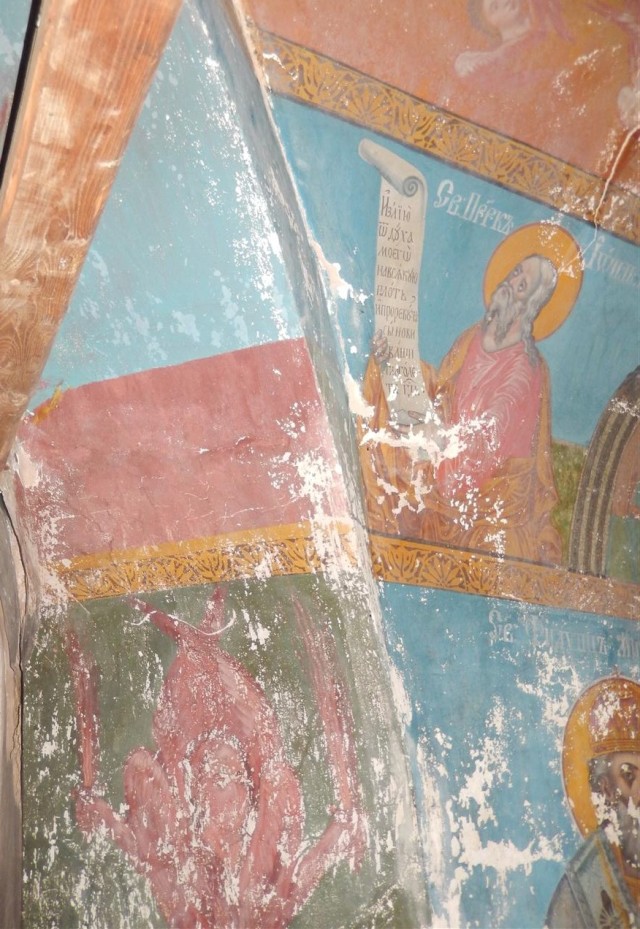 Not only these paintings were very surprizing, but the position of the building J, compared with the others surrounding buildings, rose questions. Why is it slightly turned and why is a part of the building totally lost/in ruins? And how old could this building be? I had to dig into my photo archive to get answers, and I found these images that helped me.

But first another (panoramic) picture of the building J and its surroundings.

This is how it looked like in 1972: the colour red on the outside wall is visible and most of the plaster is intact (photo by Raymond Geldermans)

Andreou seen from the air, I assume this from the same period 1960/70, although on this picture I can not see the white stone stairs next to building. The stairs might have been build a little later, maybe because of the fact that the adjacent building collapsed and the entrance to the chapel had to be restored? Lets have a look at some older images:

This the oldest image I found, a drawing. Here  in 1841 Skiti Andreou excists of only one building: our red chapel!  There are no stairs next to the chapel and the adjacent building still stands: to reach the chapel you had to go through this building.

Another picture of the old chapel in Andreou, probably also from 1841 (look at the tree/cypress left from it). 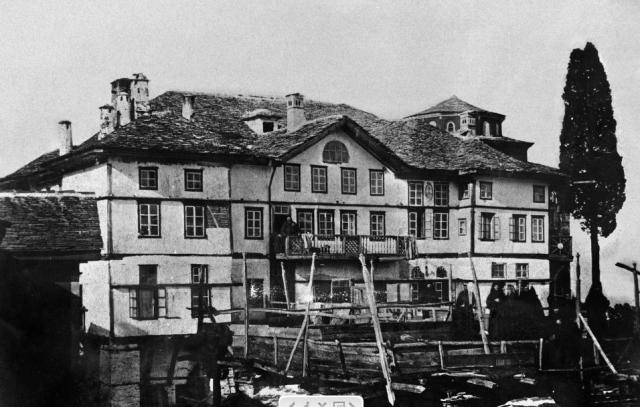 The first picture of the original cell called Ag. Antoniou / skiti Andreou in 1859/60.

On this postcard (a drawing) the old chapel is to be seen at the red arrow, but now the surrounding buildings have appeared. The picture below shows the excact same situation. The Western wing is still under construction.

This litho Starchenkov dates from 1872 and shows almost the same situation as the postcard above.

On this aerial picture the large church, finished in 1900, is ready.

And on this litho form the Feigl book you can see the large church with the old chapel in front of it.

All these pictures prove according to me that “the old chapel”was the first building of skiti Andreou and that it dates from at least 1841 (or earlier). The adjacent building, where the monks lived, clearly had a minor quality and it collapsed after the building slowly got deserted after 1920, when the Russians no longer could sent any novices to Athos. Because of bad maintenance this part of the building slowly collapsed and in the beginning of the 60/70-ties of the last century it fell into ruins. Soon after came the necessity to build the stone stairs (with an iron stairs on top of it – see the first picture in this post), to be able to reach the old chapel.

In 2015 the restauration activities were in full progress. I wonder how it look like in a few years: will it be restored according to the situation in 1841, with the old images as shown above as an example? When time comes I hope to show you the results.

This entry was posted in ruins, Skiti Andreou and tagged chapel, postcards. Bookmark the permalink.