In the summer holidays of 1994 one of the pupils of Dutch teacher Raymond Geldermans made a big decision. It was a hot summer in the Netherlands. Nelson Mandela had just become the first black president in South Africa. The first war in Chechnya broke out and Great Britain was finally connected with the Continent by a tunnel. In the meantime a Dutch boy travelled to the Holy Mountain.
After the summer holidays when the school started up, one boy was missing in the fourth class of the Gymnasium in Deurne. It was K., then only fifteen years old. No one in the school knew about his plans, it came as a huge surprise, for the teachers and even for the rector. He had left for Karakalou, so informed the abbess of the Greek Orthodox monastery in Asten, Holland. In the same year also his mother chose for the monastic life in Kolomna in Russia; she lives as a monk until today. They were inspired by the monastery in Asten to the monastic life. 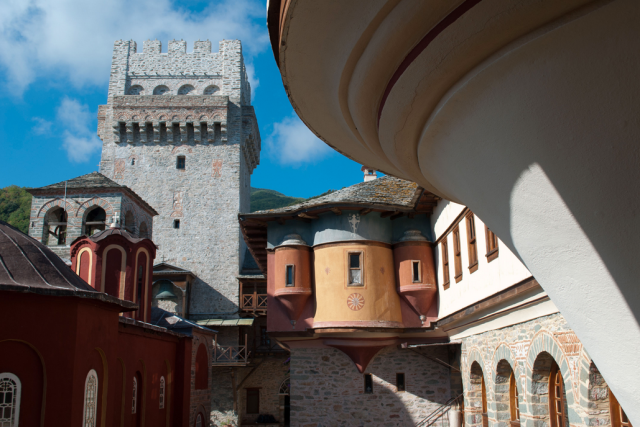 The court yard of Karakalou in the fall of 2013 (picture by Bas Kamps)
Nobody had known of his desire to become a monk. Raymond Geldermans often wondered if his stories about the Holy Mountain and his visits sparkled off K’s  interest. 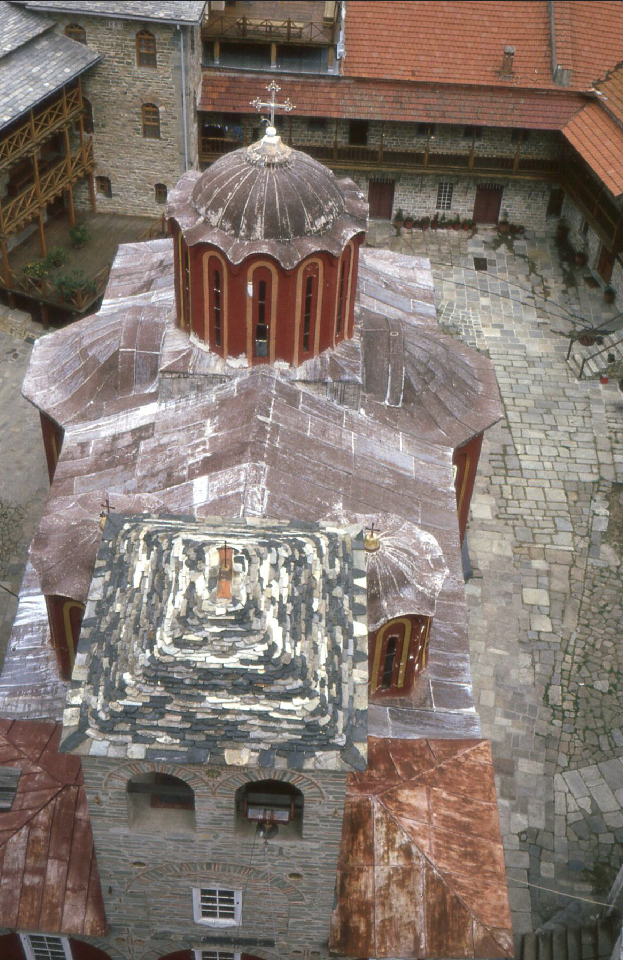 The katholikon of Karakalou (picture by Raymond Geldermans, april 1998).
The abbott of Karakalou got into contact with Raymond Geldermans. He inquired about K’s education in the Netherlands. From there on more intensive conversations followed and they cumulated in a personal invitation to visit the novice and the abbot. 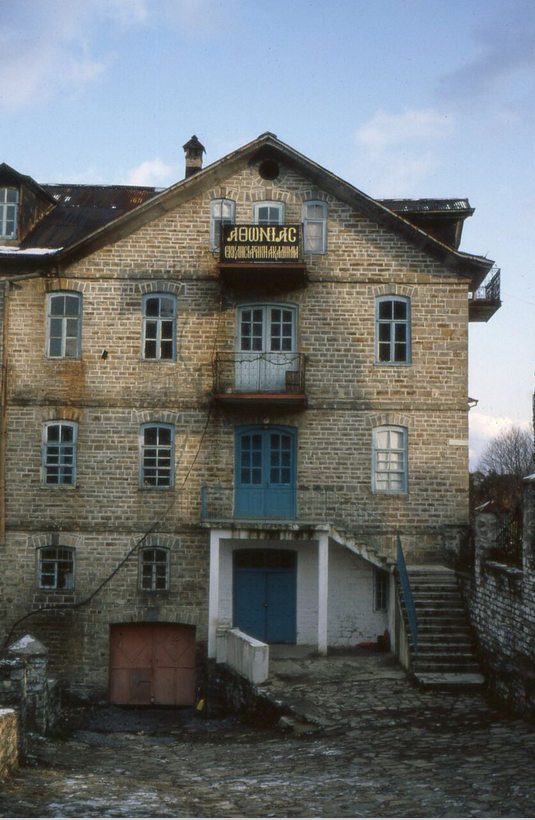 K. got his education in the Athos Academy, a building attached to the skete of Andreou, the Serail, which is situated very close to Karyes. The Academy was established in 1842.
Raymond Geldermans went in april 1998, with his son Micha, to the monastery of Karakalou. He was given a VIP-treatment. As Geldermans remarked he was received by the abbot as a second Aristoteles for his Alexander. The abbot certainly knew how to appreciate a teacher. He could visit every hidden corner in the monastery; from library to refectory, from candle workshop to wine cellar. 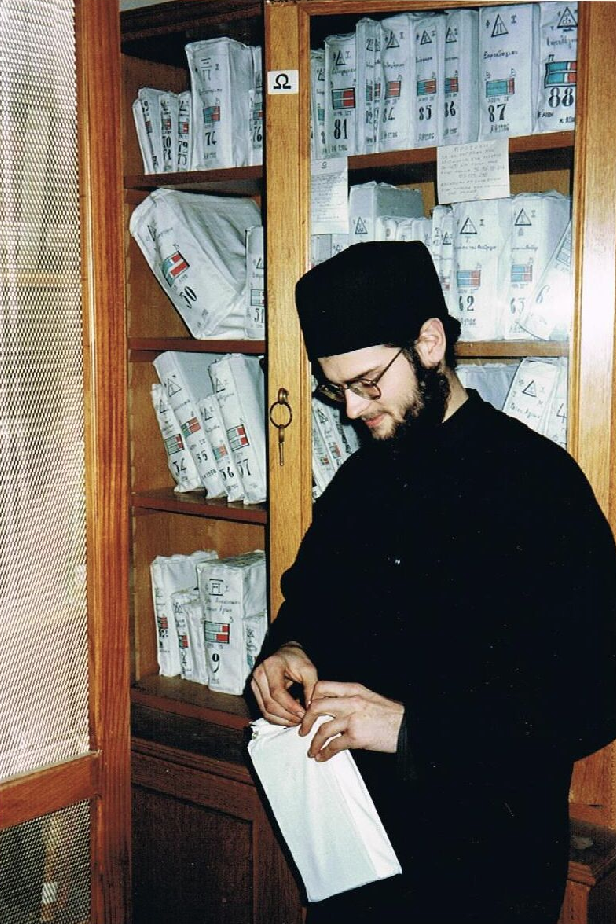 K. in the library. The library holds 279 manuscripts, including 42 parchments. Of these parchments the codex Karakalou 11, a so-called lectionarium, is of very great importance and value. In the collection of the library are included a total of 2,500 printed books. To his surprise Geldermans found out that there was a certain system in the collection (picture by Raymond Geldermans, april 1998). 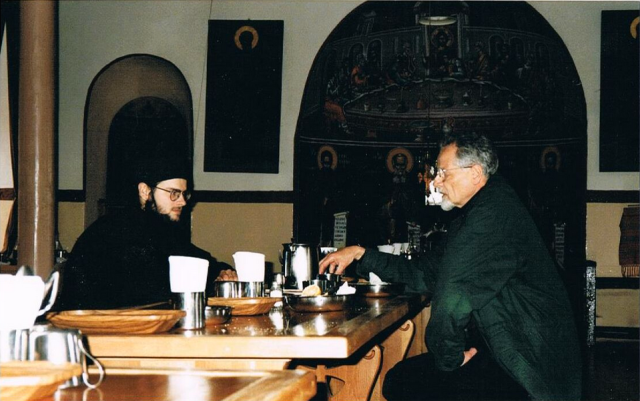 Eating with K. in the refectory (picture by Micha Geldermans, april 1998). 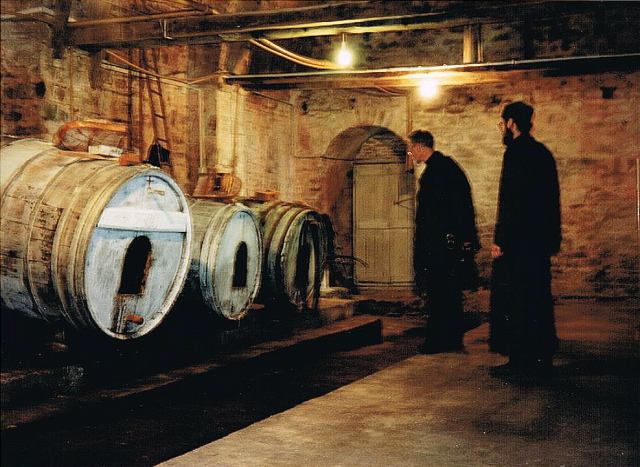 A meeting with K. in the monastic wine cellar. (picture by Micha Geldermans, april 1998).
K.  became head of the wood workshop and he developed quickly as skilled wood worker. He did important and necessary repair works on the monastery. After many years K. found out that the monastic life did not fulfill his deepest wishes. He was still very young of course and needed to discover more of the outside world. The wise abbot suggested that he should take up a study in theology in Moscow. So after six years on Athos he went to Russia. There a new life for him started, so we were told.
Later maybe more on K.  extraordinary walk through life if we have more information.

Thanks to Raymond Geldermans for the pictures and the story,
Herman Voogd & Bas Kamps

This entry was posted in 11 Karakallou, people and tagged Dutch monks, Raymond Geldermans. Bookmark the permalink.