After we installed ourselves in the guestroom at Iviron we relaxed for a while on our beds in the narrow white washed room with a very high ceiling. It had been a long day walking, starting in Vatopediou. When I looked out of the window I saw a warm evening light. So I went out to enjoy the tranquillity of the evening and to take some pictures. Except for a worker in a white T-shirt, who I would find later, there was nobody in the court yard. The monks use the few hours between dinner and bed time to retreat quietly in their cells. 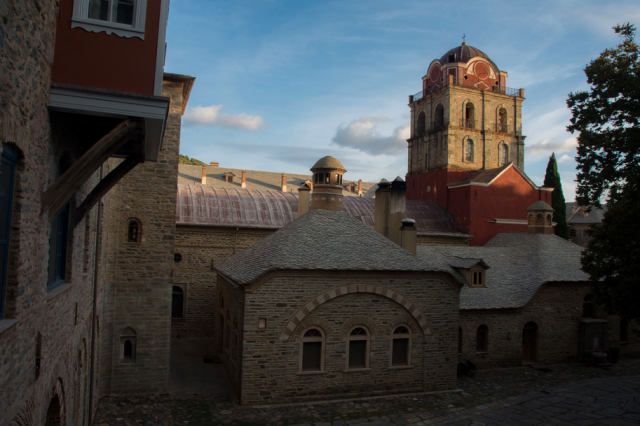 One of the towers in the evening light, taken from the stairs that leads to the guesthouse. The long building with the lead roof is the trapeza.
The original name of the monastery was Clementos, states Della Dora. The donations from the emperor of Byzantium, Basil II, made it possible to enlarge the older Monastery, so it was renamed: Iviron. A controversial figure, that emperor Basil II; he still rouses controversy in the region: loved by the Greek but hated by the Bulgarians.
The building in the front fits in very well. As if it has been there for ages. 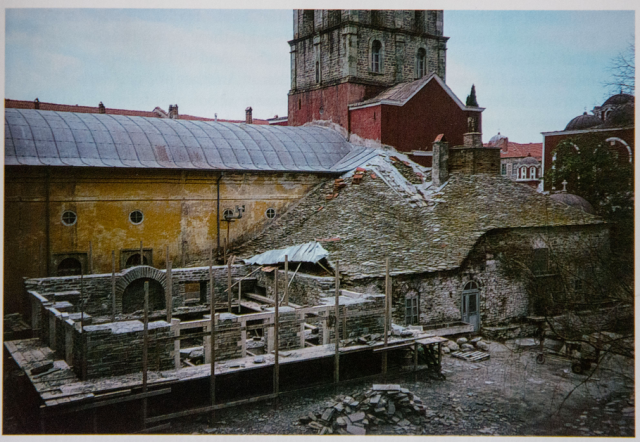 A picture, taken from Graham Speakes eminent book “Mount Athos, Renewal in paradise”, shows differently; the new part of the kitchen was built in recent times. Architecturally it tells the eternal story. I have to apologize that I have used the picture without permission. I hope I will be forgiven, sooner or later.

The draperies at the entrance of the baptistery, the viale, hang down naturally as if they are made from soft cloth instead of cool marble.

A closer look up to the bell-tower. The bell can be operated from the ground floor by a rope hanging down. Just left from the tower the entrance to the trapeza is situated, as always right opposite the katholikon.
Iviron has a time measurement of its own. An old Georgian system of keeping time. At sunrise it’s twelve o’clock. An antique inheritance from the Zoroastrians, named after the prophet Zoroaster also known as Zarathustra.

Even in the court yard of Iviron piles of timber can be found. But most of it lays near the pier. 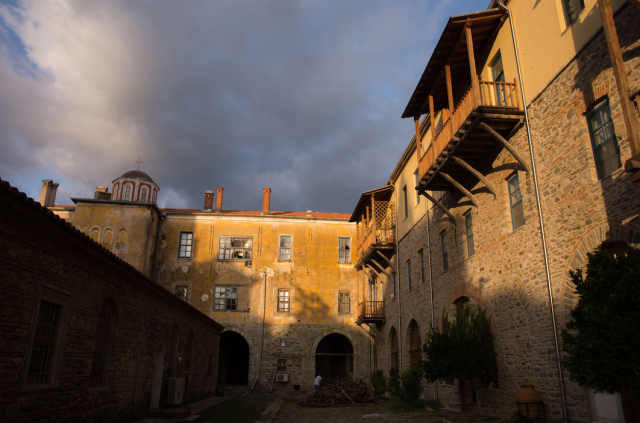 A worker in a white T-shirt was busy carrying the beams to the cellar, probably the winter supply. He was the only living soul on the premises. The northwestern walls of the monastery have not been restored yet and display a wonderful warm glow in the evening sun. Many of the windows are broken and transparent plastic is put in its place.
Even here modern air-conditioners arrive. That is probably quite sensible for the kitchen, which is the left building. 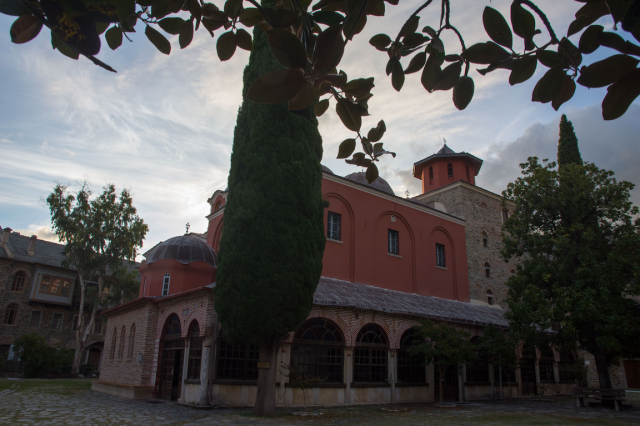 An overview of the katholikon that is dedicated to the Dormition of the Theotokos. The first church was built in the end of the 10th century. It was changed in the early 11th century. And it was rebuild in 1513. The exonarthex has half round windows. Young trees are planted in front of the windows. In the brickwork many remarkable ceramic tiles can be seen as a decoration. As Norwich puts it bluntly: “….. the church is a sixteenth-century survival of some of the fires and a few of the restorations.”
A sign pointing to the guesthouse is attached to the cypress. Many times an old and very happy monk sits on the bench leaning on his walking stick. He makes jokes about the Pope who he considers the Antichrist. To give more strength to his arguments he slaps the stick to the ground. At least that was what he did during an earlier visit. I hope he will be around during our next visit.

The top of a low pillar with an abstract never ending pattern in front of the Panagia Portaitissa. A separate square and a curly maze like figure going up endlessly (for the optimists) and going down (for the other people). A seal of infinity.

Text and pictures (except for the picture taken from Speake’s book).
Bas Kamps

This entry was posted in 03 Iviron, trip 2015 and tagged Graham Speake. Bookmark the permalink.