We started walking in the early morning from Vatopediou. We didn’t want to wait for the morning mass to finish. And we could not find a monk to give some food for the road. But we still had plenty of food. Just outside of the monastery it started to rain slightly so we decided to have our breakfast in an open metal workshop, which gave us shelter. The can of dolmas which we purchased in Ouranopolis turned out to be a real treat. 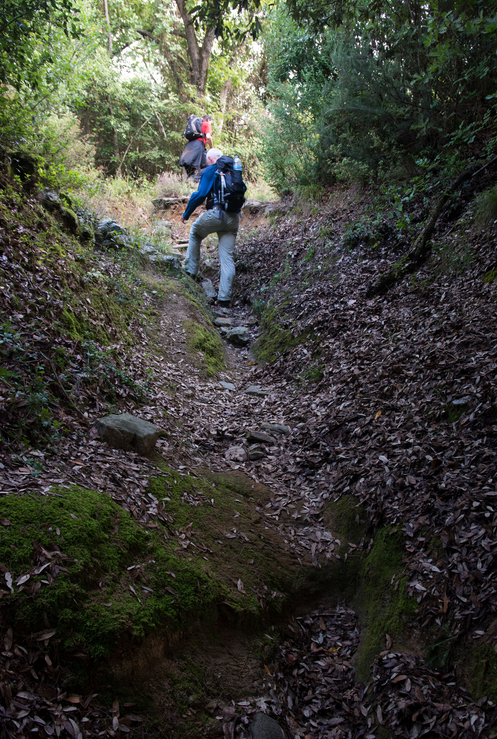 The monopati to Pantocratoros can be quite steep from time to time. It ascents from sea level to about 300 meters. Here the pilgrims Herman and Jacques climb a steep stretch where the monopati is walled by the mountain and almost disappears in a trench.

Just after the pass there is a lovely overview of the monasteries on the northern shore. Pantocratoros below and Stavronikita in the distance. The Kaliagra Tower and Iviron can’t be seen from this angle. Due to the sea breezes and the lack of rain the vegetation changed from woods into mainly shrubberies. The early morning sun reflects in a restless silver sea. The Holy Mountain was covered in a thick blanket of clouds and would not uncover itself today.

To our surprise we found an old aqueduct on the north site of Pantocratoros. We could only see it when we left the path on a peninsula to take a picture of the monastery. The bell tower is not very old; it is a 19th century fortification.

We saw the remains of another aqueduct looking inland to the west. In the background the skiti of Profitou Elias, a dependency of Pantocratoros, glows in the September sun.

It is known that the ancient city of Thyssus is nearby. But we didn’t find any traces of pre-Christian buildings. 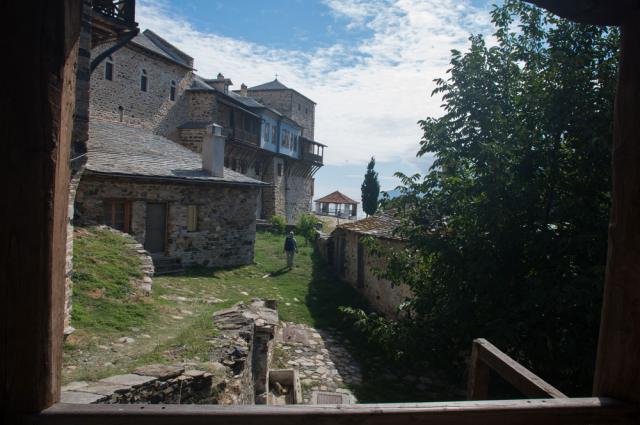 The view from a workman house. A game of chess was laid out on the table. I remembered I once played chess in Mylopotamos against a Georgian worker, surrounded by many interested fans. The potential opponents were probably working now. In the distance we see the kiosk, above the rocks and opposite the entrance of the monastery.

In front of a shed there was a chaotic collection of storage jars, amphora’s, and a bronze kettle as if they were left there in a hurry. In the background the skiti of Profitou Elias. 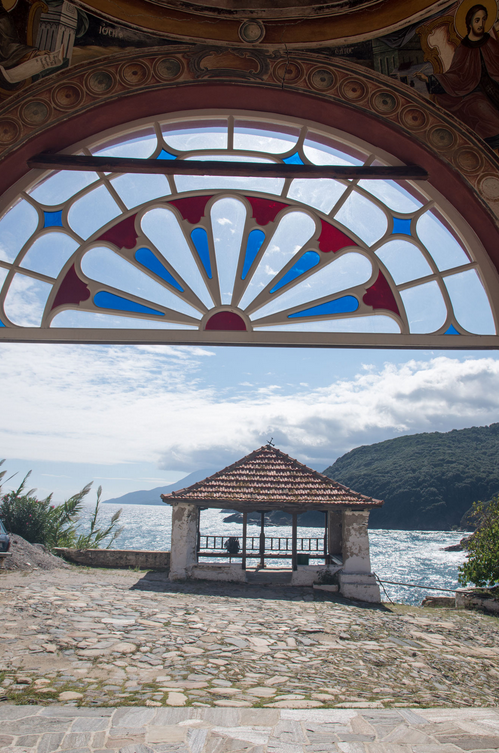 The entrance of Pantocratoros looking back to the kiosk. Pantocratoros, 7th in the hierarchy, was founded in the 14th century. The founders of the monastery, two brothers: Alexius and Ioannes, gave the icon of Christ Pantocrator to the monastery. Nowadays that icon is not here but in the Hermitage Museum in St Petersburg. Wouldn’t it be great if the icon returns home?

A strong dry wind blew from the Aegean sea. Leaving this northern site of the peninsula on lee shore. We had not seen a boat from Ierissos yet. Would they sail today?

1 Response to 1798 – From Vatopediou to Pantocratoros (day three, first leg)