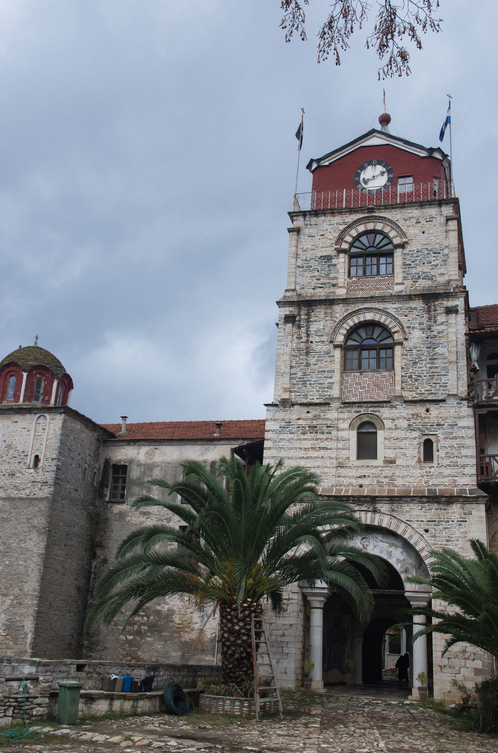 Looking back towards the entrance of Esfigmenou. The clock, guarded by two flagpoles, shows Athonian times. The palm tree will have a visitor in a couple of months, the ladder is already placed at its foot for the harvest of dates in November or December. A monk at the gate is working. The monks in Esfigmenou seem to be working all the time. Their autarky drives them industrious. Just left of the palm tree is a nice pool, which reflects the walls of the monastery. A peaceful spot for contemplation. 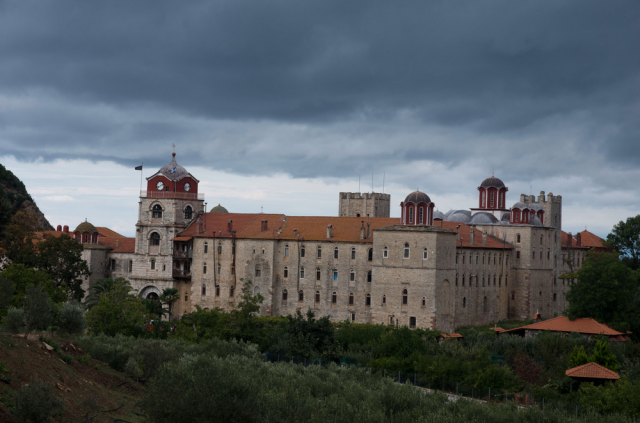 The last view of whole complex of Esfigmenou in its full splendour, with a dramatic sky. The black zealot flag is waving us goodbye, wishing us a save pilgrimage to Vatopediou, where we hope to sleep this night. A Greek flag is hanging out of one of the windows. There are quite a lot of chimneys coming out of the windows of monk cells. It seems to be another example of their improvisational talent and creativity. If the old inside chimney is not working anymore, they just build one out of the window with a very long pipe overlooking the roof. 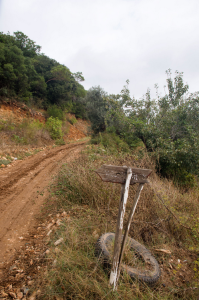 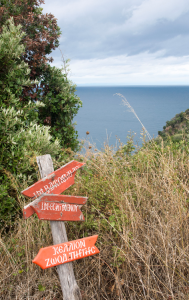 It is not the route with the clearest signs. We really tried to figure out where this sign would lead us to, but we couldn’t. An unreadable sign is a bad sign. There is some work to do for the friends of Mount Athos on this route. We had to open a large gate, which said in Greek and English: “Close the door please, there are horses”. We wouldn’t see any horses, unfortunately, but we did close the gate. 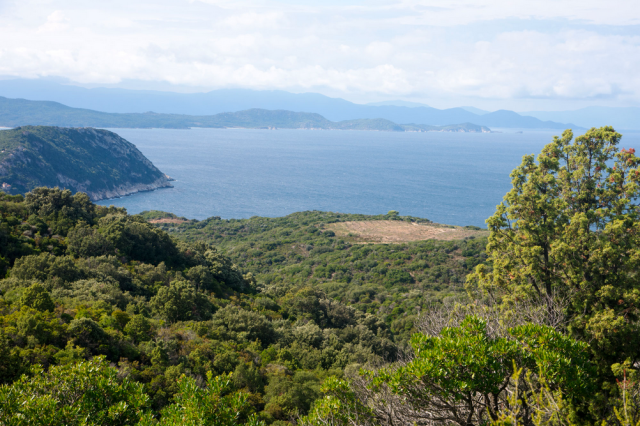 The dirt road became smaller until it dissolved on the top of a hill. It was quite a climb from Esfigmenou in retrospect. We were confused. There were all kinds of little tracks, but not a clear path. They were like sheep tracks. But there are no sheep on Athos, of course. So we followed a route that stopped after a while between the shrubberies. We went back to the top of the hill and tried another path. That also lead us nowhere. The long day started to take its toll; we started early this morning in Zographou. Now we lost our good path. These were no paths, these were loose stones like gravel on a sunburnt hilltop. At last we were lost. We had an intense discussion what to do. Go back through the gate? Go back to Esfigmenou? We had several looks at our Zwerger map. But we couldn’t figure out exactly where we were. That map, which has been so helpful all those pilgrimages, is not precise when it should be precise. We went down the hill, the way we had come, but we didn’t find an alternative route. So we went back to the top where we had seen a dirt road in the distance but no proper path towards it. We decided to try to get on that road that would lead us, with a huge detour, to our goal. Going down the hill the bushes became thicker and thicker and the slope steeper and steeper. We slipped and fell to the bottom where there was a little stream that had made this dense vegetation possible. We crossed it with some difficulties and crawled up on hands and feet to reach the dirt road. There we counted our scars, wounds and shared our relief.

As expected the dirt road soon paralleled the track we had missed and we could cross over. We were really excited that we found our way. From here it was an easy way down to the sea. 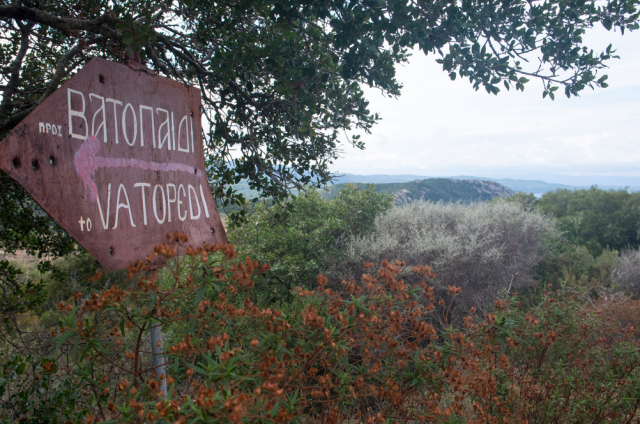 This is probably the sign we had missed, we found out later, when we looked at the pictures. We had seen it, but misinterpreted it. It’s arrow pointed forward and so we went forward. But there must have been the start of a monopati somewhere opposite the sign. No matter how big the sign, some people will miss it. 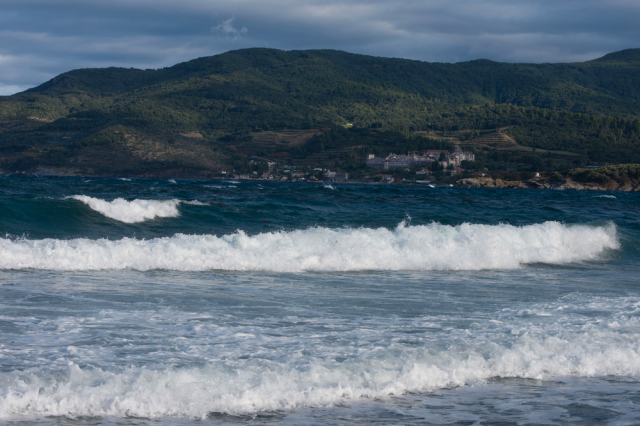 The rather noisy waves in front of Vatopediou, our final destination for the day. Still quite a walk to go, all along the coast. But up and down over land tongues. This beach was, like all others on Athos not very clean. The tourist industry from Thassos and beyond leaves its remains here. So many plastics are dropped on the Athonian beaches. And nobody cleans the beach, because it is of no interest to the monks and there are no tourists to take offence. 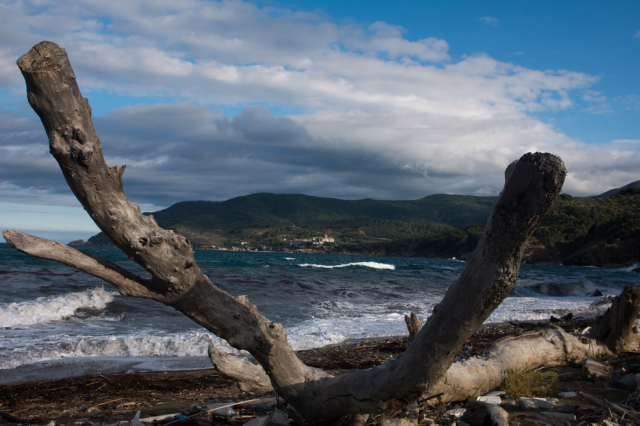 A big tree, stripped of its bark, had found its peaceful last resting place on the beach. 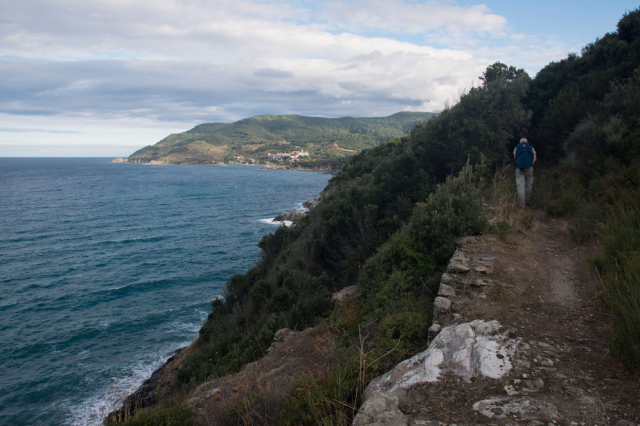 Pilgrim Herman on the monopati with Vatopediou in sight. 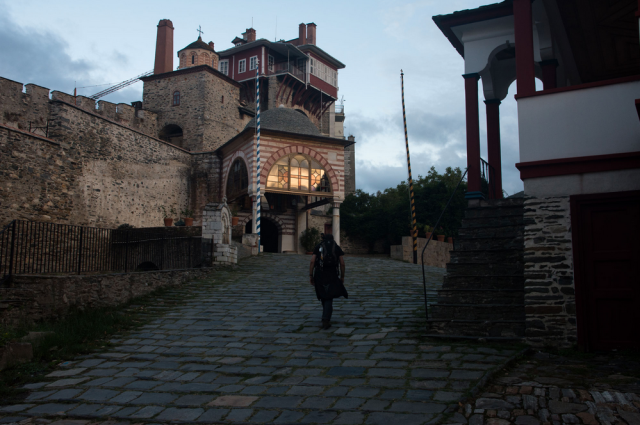 Pilgrim Jacques on the last ascent to the main gate of Vatopediou. The kiosk is on the right. The sun was already setting for the night. We were late for dinner, but received a full meal in the refectory with some other pilgrims who were late while several monks were cleaning the place. In our guestroom we met a happy young French pilgrim who was baptised just today. We slept a fulfilled sleep right under the roof. 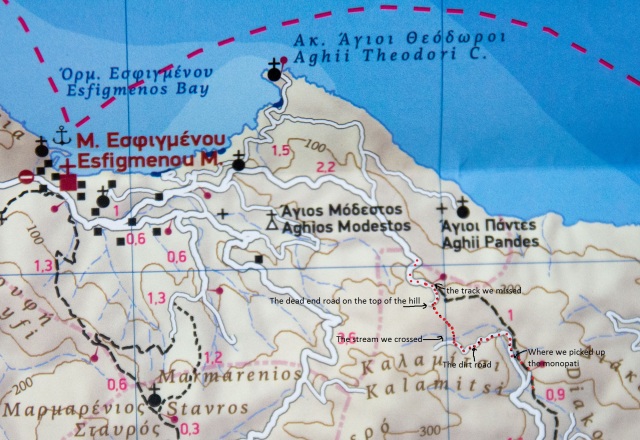 This entry was posted in 02 Vatopedi, 18 Esfigmenou, trip 2015 and tagged signs. Bookmark the permalink.