Posted on February 6, 2016 by athosweblog

I ended post number 1775 with pictures of the lovely lunch we had in the trapeza of Maroudá. Today we will take a closer look at the refined and extraordinary paintings on the trapeza walls. 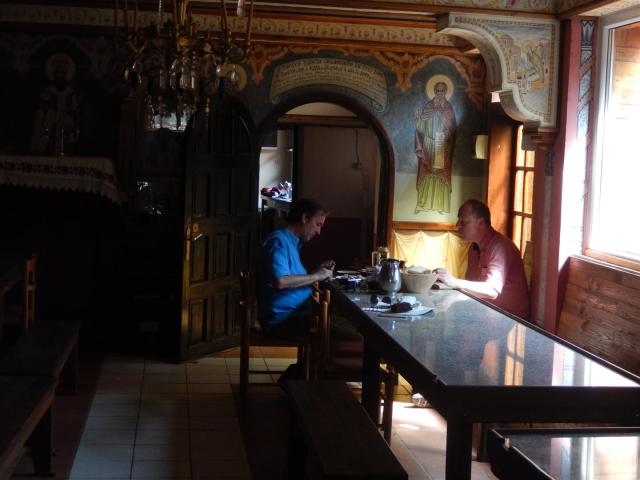 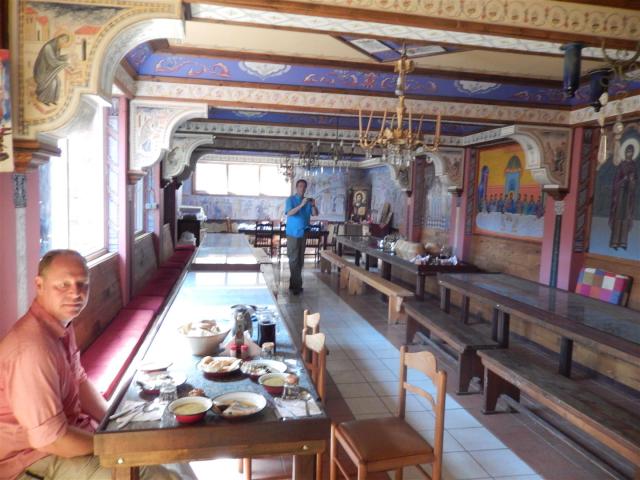 After lunch I took time to have a closer look at the paintings, and to my surprize they showed some scenes not common in Athonian trapezas. 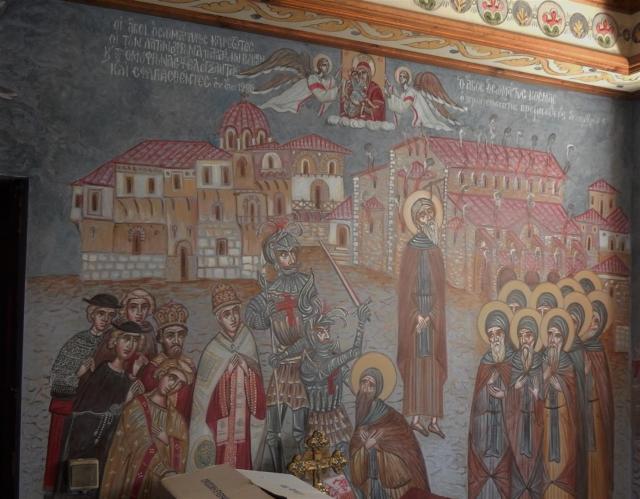 The first scene puzzled me: it is obvious that the event shown took place in 1280 AD and that a saint called Agios Osomatos Cosmas is in the centre of the scene. On the left a group of six people, an Orthodox Emporer (Michael VIII Paleologos ?) and his queen are looking at two knights with red crosses on their chests (Latin crusaders?), together with with two Roman Catholic priests! The knights seem to threathen the Holy man in the centre (Cosmas?) and the group of nine Holy Fathers behind him, while a Holy man in front of the knights begs for mercy.

In the meanwhile a church in the background, that bears resemblance of the Protaton church in Karyes, is on fire! Might it be the martyrdom of the 26 Martyrs who were burned by Latin crusaders in October 10, 1280 in the old church of Sografou monastery? For more information look here. 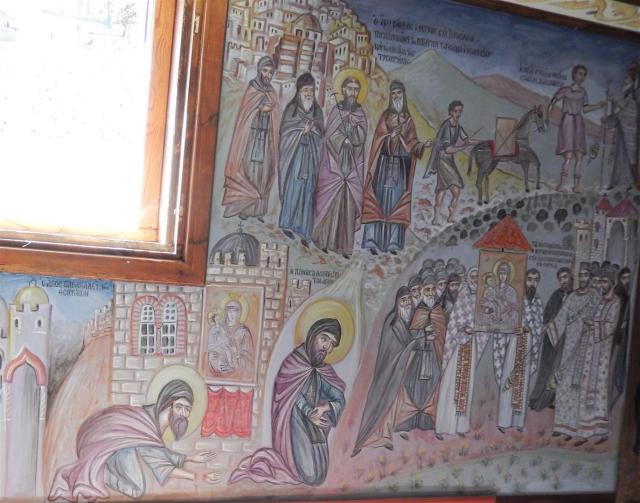 The two pictures above show us scenes from the life of Saint John of Damascus. He was born about the year 680 at Damascus, Syria into a Christian family. Because of a dispute with the Iconoclast emporer Leo III the Isaurian, the Caliph ordered that St John be removed from his post and that his right hand be cut off. The story continues:

“That same evening, they returned the severed hand to St John. The saint pressed it to his wrist and prayed to the Most Holy Theotokos to heal him so that he could defend the Orthodox Faith and write once again in praise of the Most Pure Virgin and Her Son. After a time, he fell asleep before the icon of the Mother of God. He heard Her voice telling him that he had been healed, and commanding him to toil unceasingly with his restored hand. Upon awakening, he found that his hand had been attached to his arm once more. Only a small red mark around his wrist remained as a sign of the miracle. Later, in thanksgiving for being healed, St John had a silver model of his hand attached to the icon, which became known as “Of the Three Hands.”

Detail of the Icon with three hands. 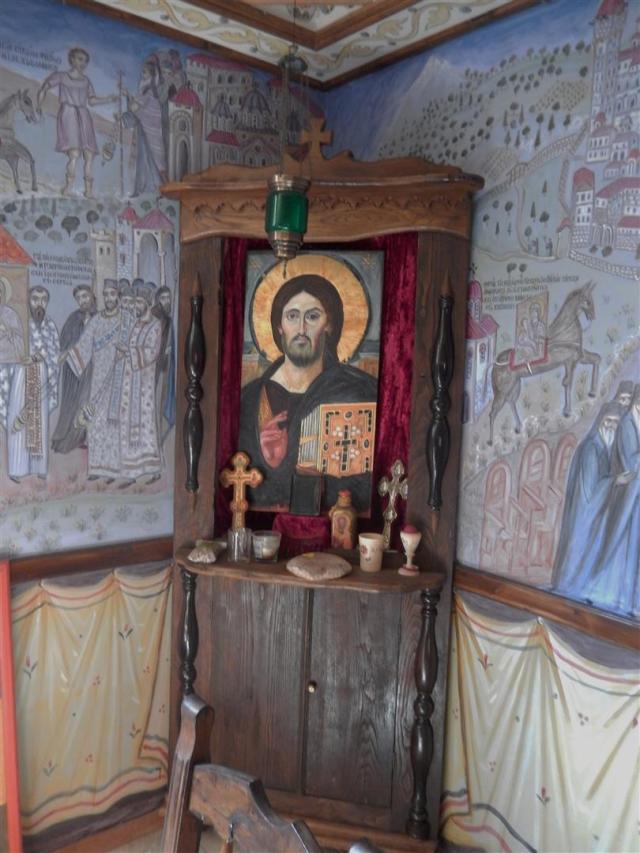 A cubboard in the corner of the trapeza, with the famous pre-iconoclasm icon of Jesus Pantocrator (with one dark eye) from the Catharina monastery in Sinai – Egypt 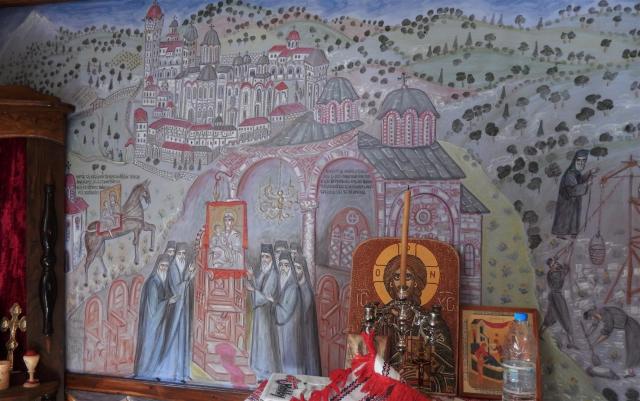 The story continues on the next wall: the icon is brought by mule to the monastery Chilandariou (thanks Alex for your comment). This text might reveal the meaning of the scene: 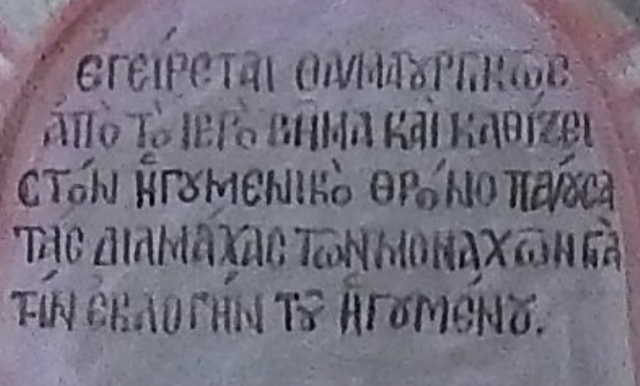 This next scene is also interesting: 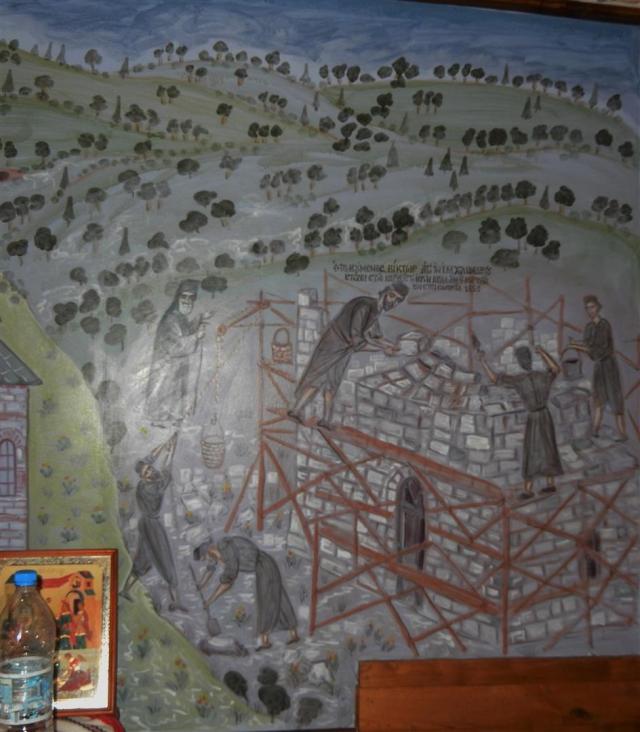 It shows the building of Maroudá church by monks in 1653 by Igumenos Victor of Maroudá (overseeing the monks on the left). 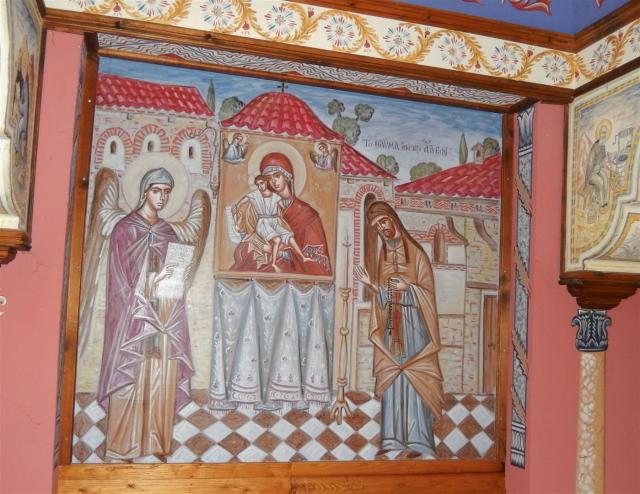 The next scene is more colorfull and obviously painted by a different artist. In the middle an icon of Axion Esti, with an angel to the left and a worshipper to the right (“to fauma en tou adain” – the miracle of Adain?). 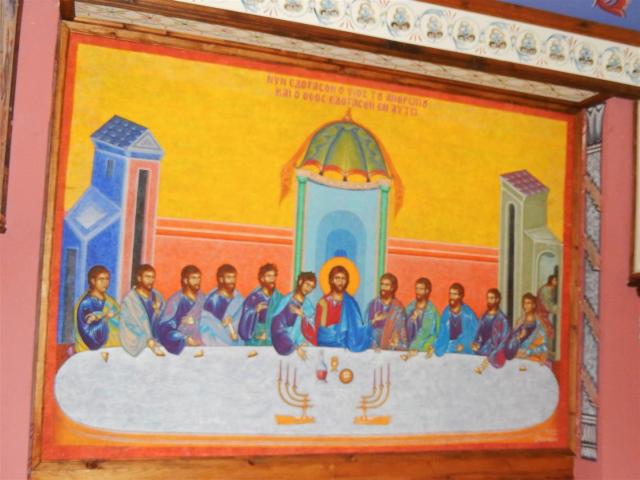 The Last Supper – the photo is not quite sharp, sorry -, with the 12th apostel Judas leaving the room, on the right. 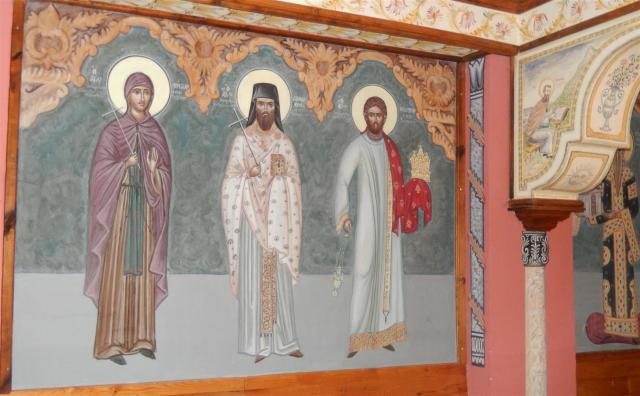 The next scene (in a better quality) shows three saints, from left to right: Agios Kyrill 1566, Agios Damastinos 1771 and Agios Onoufrios 1818 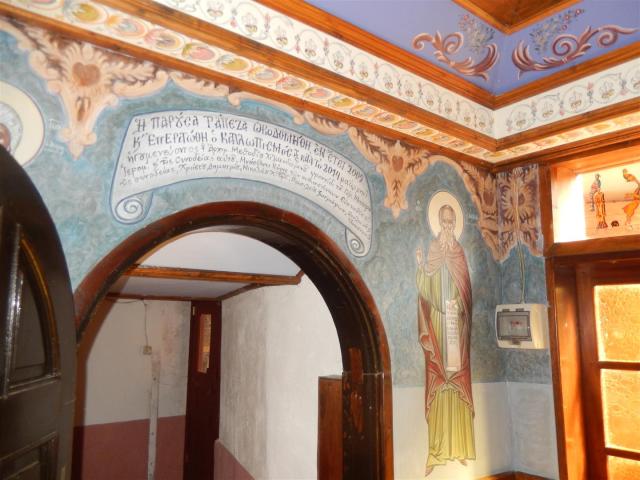 Above the entrance door you can read a text with the years 2009 and 2014 in it, probably the years of restauration or the year of painting. On the right again Saint Savvas.

When you leave the trapeza you will see the following scenes outside, painted on wooden walls: 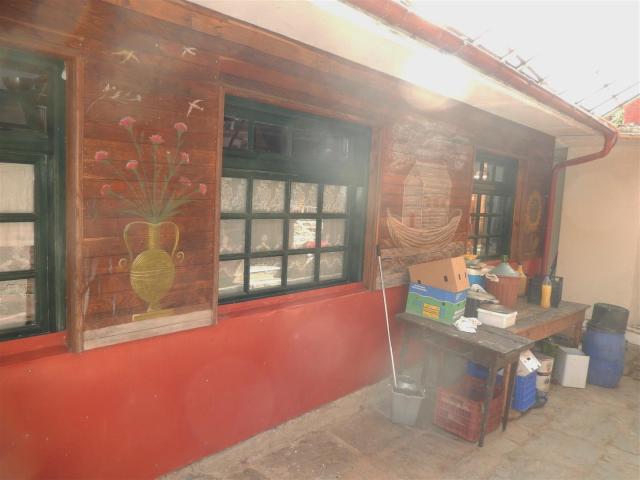 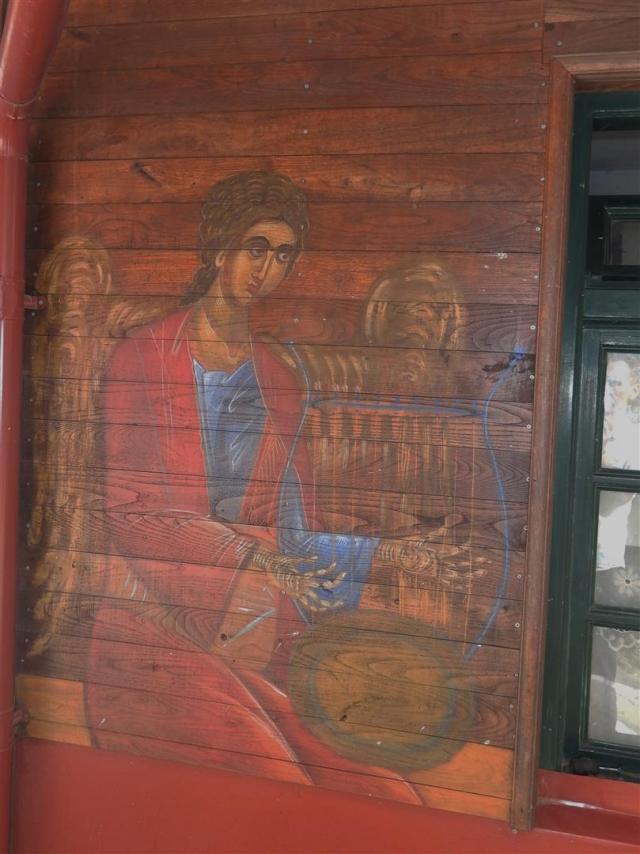 An angel playing a lute

This entry was posted in kellia, trip 2015 and tagged Maroudá, paintings, trapeza. Bookmark the permalink.