The guesthouse where we received so much hospitality from the friendly monks of Esfigmenou. After the common welcoming drinks the guest monk asked if we wanted to eat something. He brought a full vegetarian meal, that really tasted well. The Agia Sophia in Constantinople is a picture you encounter quite often on the holy mountain. Not surprisingly; it is  the seat of the Patriarch since the 6th century. 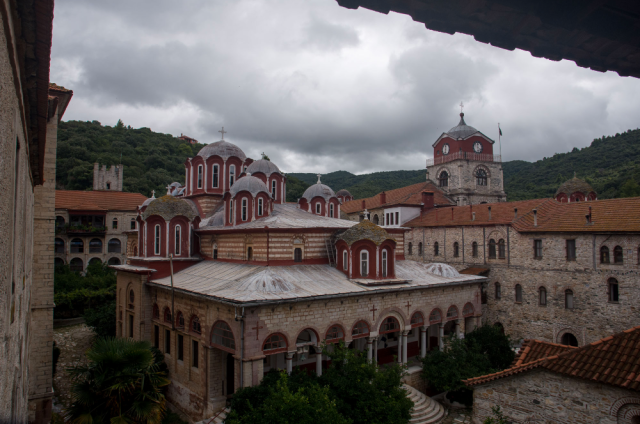 The inner courtyard with the catholicon. The black flag from Esfigmenou, the flag of the zealots, is waving from the entrance tower. 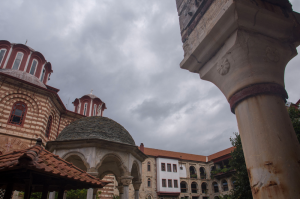 Opposite the main entrance a monk kindly invited us to take pictures in the inner courtyard. So we didn’t feel awkward taking the following pictures. From the entrance you see the well and the font or viale. It was built in 1815 by the abbot Euthymios. The font has eight marble columns that hold a dome. 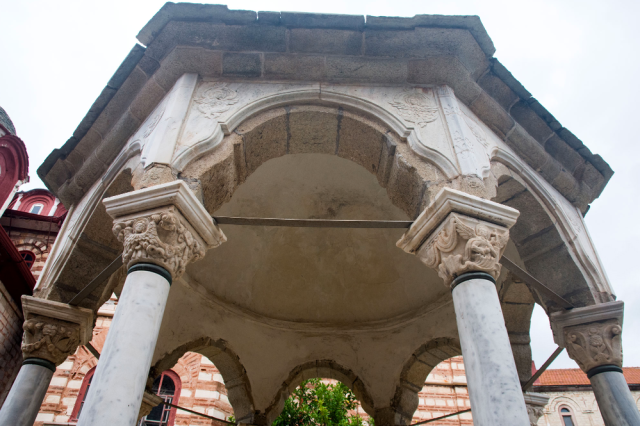 A closer look at the font. The columns are connected by sculpted marble metopes, so I learned. 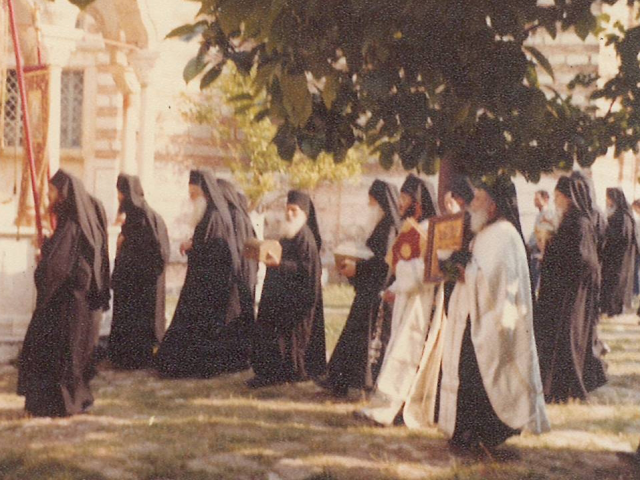 The Esfigmenou font used at Ascension. The procession (in 1978) heads to the font behind for the blessing of waters. This ends the all-night vigil. The monastery is dedicated to the Ascension.

Grapes, ready to be eaten, are hanging from a pergola on the inner square looking towards the catholicon.

The mosaic floor near the main entrance. The nicely coloured cement between the stones drew my attention. They have completed the floor with much attention, care and love.

From the ceiling of the dome God looks down upon us mortals.

It was a pity we couldn’t see the Napoleon Bonapartes tent, which is kept as a relic here. It is only shown on Ascension day, when the procession is there. So it was time to move on. We had a long way to go to Vatopediou.

This entry was posted in 18 Esfigmenou, trip 2015 and tagged church, God, mosaic, viale. Bookmark the permalink.