In the outer ring of the courtyard we found a covered space with old murals. Frescoes that are in a bad condition.

This saints mantle has almost vanished into thin air. The copper bell hangs quietly from the ceiling. How different it must have been when that blistering, devastating fire started.

Two demons from hell come out of a whales’ mouth. One is shooting with his bow and arrow.

The Serbian monastery of Chilandariou was founded is 1198. According to Graham Speake it housed ninety monks in 1204. In the fourteenth century it had become a state within a state. With many possessions, dependencies and villages over which it ruled. In the fifteenth century it grew even bigger to 600 villages and 180.000 vineyards. Even today Chilandariou holds 20% of the land on Athos.

The katholikon is rebuild by the Serbian king Milutin in the 13th century, a century after the foundation. He also constructed the large tower, in the heyday of Serbian power, when the Serbs ruled Athos. Chilanariou has an association with fire. There was a disastrous fire in 1722. And another one in 1924. And more recently a disastrous fire in 2004. 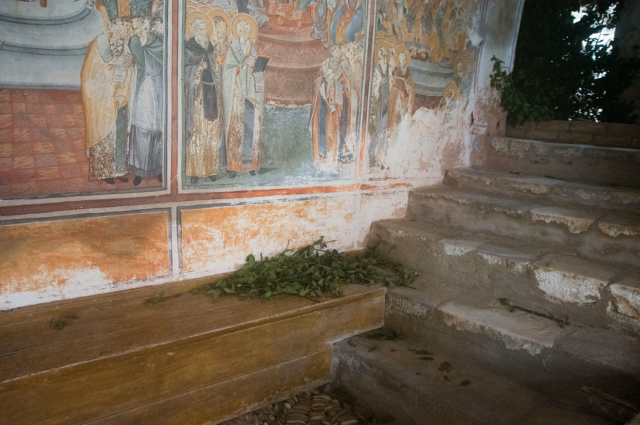 A peaceful corner of the monastery with scattered leaves laurel leaves on the bench. 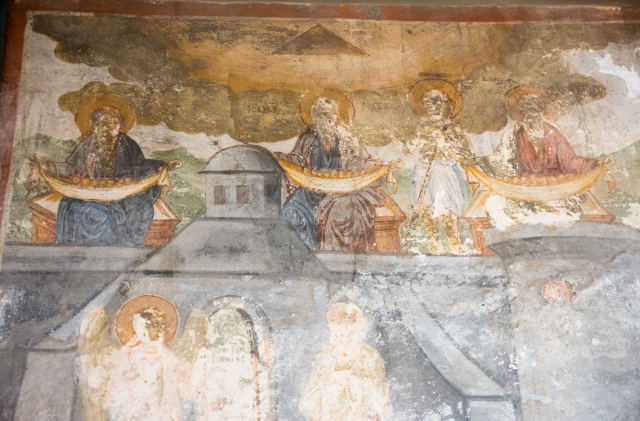 Three saints holding boats made from a cloth with many people in them. “Boat refugees”, one of the pilgrims remarked. Indeed, a new perspective when you look at it with a contemporary eye. But the need to be saved is a common line from every perspective.

This will be my last contribution in 2015. Next year we will continue our journey.

This entry was posted in 04 Chilandariou, trip 2015 and tagged Frescoes, Graham Speake, Serbia. Bookmark the permalink.

3 Responses to 1770 – Some frescoes of Chilandariou (day two, second intermezzo)