Posted on November 7, 2015 by athosweblog 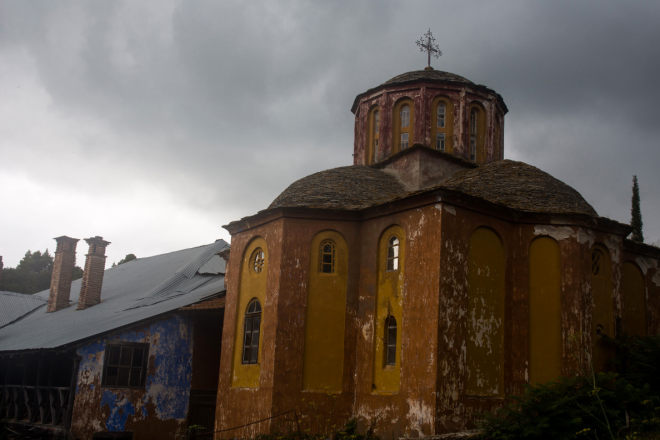 In light rain we passed a church that is left to decay just as it was six years ago. Coming from the Chera crossing the church is the first building just before entering the monastic complex of Zografou.

It is the only Bulgarian monastery on Athos and this sign might lead you to the Bulgarian capital, Sofia, which is 459 km away and is named after its sixth century basilisk, the Saint Sofia, like the Hagia Sophia in Constantinople. Byzantine leads. The other signs show the way to monasteries starting with Vatopediou, which we left earlier that afternoon, to Karyes and to the harbour at Dafni.

The guesthouse of Zografou is just outside of the gate of the monastery nowadays. When we visited the Monastery six years ago the guesthouse was still inside in a gloomy part of the complex. The building that is the new guesthouse was used by workers and was in a state of decay.

The building six years ago when the whole monastery was covered in scaffolding.

Now it is all brand new. Not only the balconies and benches. But the dormitories as well. We had to wait for the guest monk to arrive. When trying to sit down pilgrim Jacques tore his trousers beyond repair. His only pair. Neither of us had a spare pair. From there on he would wear a jacket over his trousers as a kilt. Fortunately he later bought a new pair of trousers in Karyes. The friendly archondaris (guest monk) showed us our comfortable room in the back of the building and invited us to visit the service that was going on.

We sat in the church for twenty minutes or so. Quite a few people lid a candle there, including myself. The many thin brown candles burned intensely. In the church a grim looking old monk, a bit shrunk with a long white beard, send us off like school boys because we admitted to him that we were not Orthodox. We felt a bit humiliated. And puzzled because one monk invited us in and another threw us out of the church. We waited among the hungry and curious kittens in front of the refectory for the service to end. It is the custom to have a meal right after church. There were only workers and laymen in the high dining room, the monks ate somewhere else.

After dinner, when we wanted to leave to go to our room, a young monk spoke to us and invited us for a drink in the cellar. At first we hesitated after the previous experience. But our curiosity prevailed. The cellar is accessible just right from the main entrance. He opened the locked subterranean space for us. We saw many oak barrels in different sizes.

Entering the caves guided by the young monk.

He wanted us to taste the grappa, distilled in the monastery. As you can see it is rather strong stuff, but just under 50%. It tasted pure, fresh and intense.

We had quite a conversation with him. Or rather he shares his feelings about homosexuality, adultery and other moral questions with us. Of all the sins he placed homosexuality as the first in rank. We quickly changed the subject to not spoil the moment. In a sensitive way he told about his family and his brother. About their attitude towards religion. About their viewpoints on his choice to become a monk.

Three other Bulgarians arrived in the cellar. It looked as if they came in for a drink, as if they entered a pub. The young monk didn’t seem surprised and prepared some nice cheese with onions and fresh herbs. He must have been prepared for an underground evening. We now have a place to stay and ski in the Bulgarian mountains, because we became friends with a ski-teacher after a few wines, which followed the grappa. Despite the language difficulties we were able to share information about subjects like routes, soccer, jobs, and our children. And we learned to toast in Bulgarian. And for the rest: all that happened in the cellar of Zografou stays in the cellar.