Inside the monastery of Dionysiou, behind the arcades, on the wall of the refectory, there are fascinating medieval fresco’s. I will show some details of the painting. In the earlier blogs by Wim starting at number 1100, he already explained the meaning of the pictures in full detail, all derived from the Apocalypse of John. They were painted between 1560 and 1564. I will only comment by biblical quotes. Aren’t the paintings just an illustration to the bible texts? Made in order to give the illiterate an image of the story that must be told. Like modern comic books or video films. 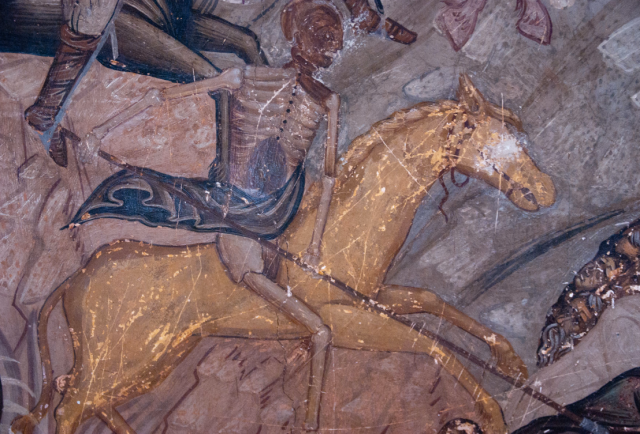 I looked, and there before me was a pale horse! Its rider was named Death, and Hades was following close behind him. 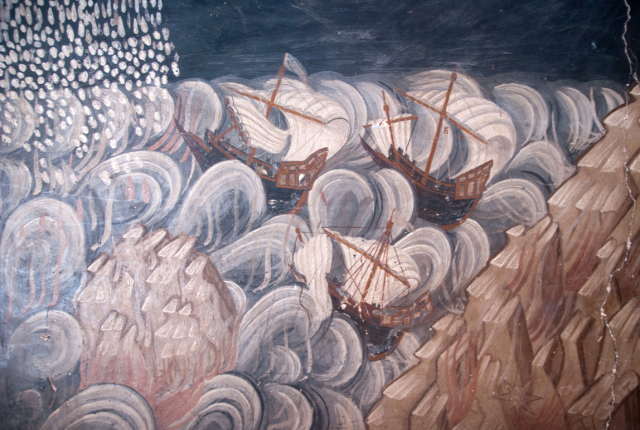 The second angel sounded his trumpet, and something like a huge mountain, all ablaze, was thrown into the sea. A third of the sea turned into blood, a third of the living creatures in the sea died, and a third of the ships were destroyed. 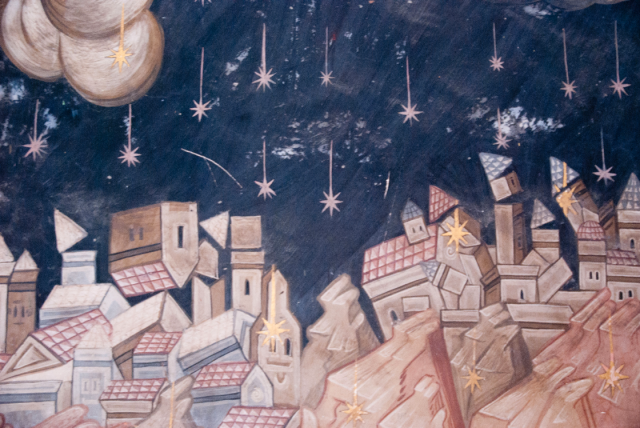 I watched as he opened the sixth seal. There was a great earthquake. The sun turned black like sackcloth made of goat hair, the whole moon turned blood red, and the stars in the sky fell to earth, as figs drop from a fig tree when shaken by a strong wind.

And out of the smoke locusts came down on the earth and were given power like that of scorpions of the earth. When he opened the Abyss, smoke rose from it like the smoke from a gigantic furnace. The sun and sky were darkened by the smoke from the Abyss.

The locusts looked like horses prepared for battle. On their heads they wore something like crowns of gold, and their faces resembled human faces. Their hair was like women’s hair, and their teeth were like lions’ teeth. They had breastplates like breastplates of iron, and the sound of their wings was like the thundering of many horses and chariots rushing into battle. They had tails with stingers, like scorpions, and in their tails they had power to torment people for five months.