Posted on February 9, 2015 by athosweblog

We received a warm and friendly welcome in the guest house of Dionysiou. It was good to be in a monastery after the walk from Grigouriou in the snow. We had a spicy discussion with another guest about our walking trip and the risks we took. Later he apologised and stated that he just had expressed his concerns about our wellbeing.

The guestrooms are located just behind the medieval tower in which the famous antique library is hidden. There is a separate room for guests and workers where you can make your own Greek coffee. The concept of self-service is being introduced in the monasteries. We had an inspiring conversation with an American who once had a construction firm in New York, but now worked temporarily as an aid in the kitchen. “Never put all your eggs in one basket”, was one of the grim lessons of life he taught us. He knew all about the movie Matrix and had written a comment about it saying the movie is a positive and realistic expos of several biblical doctrines.

When I was feeling warm and comfortable again I took a walk around the monastery, still covered in snow.

The view from the balcony looking down to the buildings in the harbour area. This is not a black and white picture.

Not all the paths were cleared of snow. The path to the cemetery was the exception. 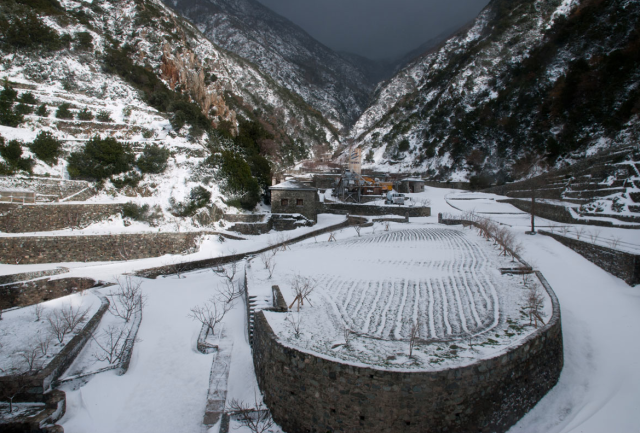 In the background there is a small cement factory. A rare industrial site on the Holy Mountain. The neatly ploughed field in the centre is tied together by a stone wall. To the left and right there are terraces. There is a small river streaming down behind the big terrace. Only the walls of the canalised river can be seen. 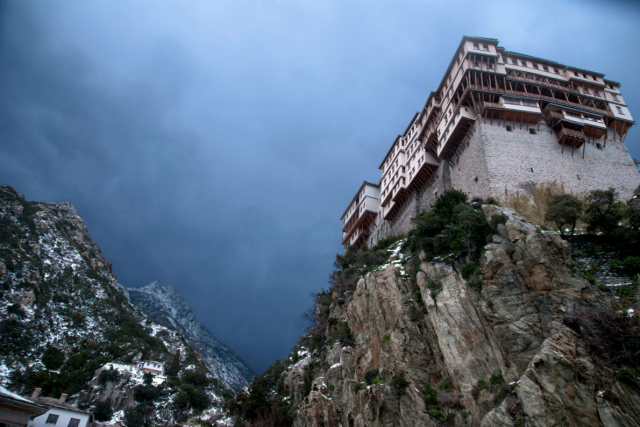 Dionysiou as seen from the harbour, looking up the massive rock. What a strategic place that must have been. It probably gave an adequate protection against pirates in the Middle ages, so I thought. A save haven. “Hospital for the soul”, as one of the other pilgrims put it.

The view from the pier. The cemetery is near the cypresses. The overhanging wooden rooms and balconies are all the more impressive if you realize they bear four stories. The tower which contains the library, shows it’s battlement. The old boathouse at the harbour with an open space on the ground floor.

At sea there were sudden whirlwinds which left white foam. These are some of the same buildings close to the harbour that are pictured on the first photo.

It was getting dark quickly. So I rushed up to be inside on time. The monks close the gate at dusk. The idea of being excluded for the night made me shiver.