After a nutritious dinner in the monastery in the company of the monks and half a dozen workmen, we could unwind and prepare ourselves for the next day. I decided to try and make some pictures in the stormy night.

From the guesthouses there is a nice overview over the courtyard of the complex, the tiles on the roofs and the Byzantine domes of the church. The restless sky foretells the abundant amount of snow that is going to fall later that night.

The bright lights behind the windows are lit in the space between the church (catholicon) and the refectory (trapeza). The floor between the two rooms contains a beautiful illumination of endlessness. ( I took the picture below on an earlier trip in 2011 and I manipulated it to its essence). 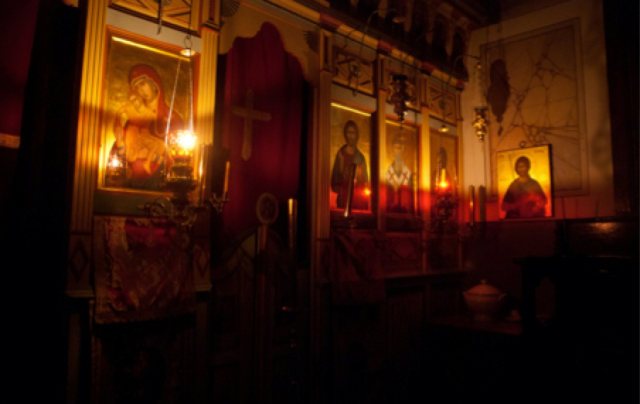 In the guest quarters there is a small and quiet chapel. I found nobody there but silence. I sat down for a while, opening my senses. The icons released their golden rays in the sparse candle light.

From the chapel, through the aisle, is a door leading to a balcony along the wall of the building. The balcony is on the sea side. The wind gave way. The roof had caught a little snow. The three lights are the guest bathrooms. Bathrooms with a view. Some monks were still up.

But there was a surprising natural view on our group as well. We shared a room with our group of five men. I caught them by surprise while relaxing on their beds. Pilgrim Herman lied down and stares at the ceiling and pilgrim Martijn studies tries to communicate with his cell phone. But there was no WIFI there. I didn’t snore that night, they told me later.

This entry was posted in 17 Grigoriou, trip 2014 and tagged winter. Bookmark the permalink.