The first is Father Ilarion form Simonospetras, who died on 19th of August aged 68. He was missing after a boat capsized: two other monks could save themselve, the body of Father Illarion was foun three days later by divers. He was well known to pilgrims because he was the driver who brought pilgrims from Dafni to Simonospetras vv.

The second monk died just last week, Thursday September 4th, when I was on Athos. The young Serbian monk Athanásios from Chiliandariou a hundred meters into a ravine, when his car slipped and fell off a crumbly road. He was on his way to provide help two firemen, who also fell 70 meters deep in the rugged canyon. The firemen survived the accident and were brought by helicopter to a hospital in Saloniki. Athanásios was the driver of the fire truck of Chilandariou.

The third person died about two/three months ago, the excact date is unknown, probably somewhere in May. It was Jacobos from the Agiou Nicolaos or Monoxylitis mexochi/winery. Jacobos was originally Roman Catholic, who came from aristocrat Venetian family, went to Athos in 1997 and who made fine wines, which he promoted on this professional website. He embraced the Athonian way of live and became Orthodox. According to the sales woman in the Ouranopoli store it was not known if somebody would replace Jacobos and continue the winery….. (thanks to Vasilis’comment). 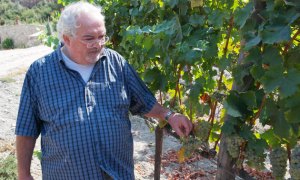 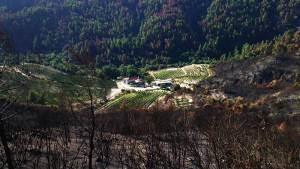 Photo of Monoxylitis after the fire of 2012

This entry was posted in news, people, trip 2014 and tagged death, monoxylitis. Bookmark the permalink.