1617- One remnant of the destroyed coast path between Iviron and Lavra: the Velas bridge

The long dirtroad from Iviron to Megisti Lavra was once of course a mulepath.  I think that after the millenium festivities in 1963 when the road Dafni Karyes was made that the bulldozering of the track began. I found a few undated maps where the coast path is still to be seen.

The line with the little dots near the coast is the coast path. The arrow points were the stream with the name Velas enters the sea. Apparently the path (with the larger dots) or road that lies higher on the hills was the usual route to Lavra.

On this map it seems that they made a dirt road from Iviron to the tower of Amalfi (Morfonou) but the track passing the Velas stream is still a footpath. By the way, there used to be a path from the Romanian skiti Lakkou (Dimitriou) that passes the Antithonas mountain (1042m) to the other side of the peninsula to Paulou and other monasteries as you can see on this map. Is it still there or totally overgrown?

Again a map of the old monopati between Iviron and Lavra. Arrow points to Velas or Vellas. 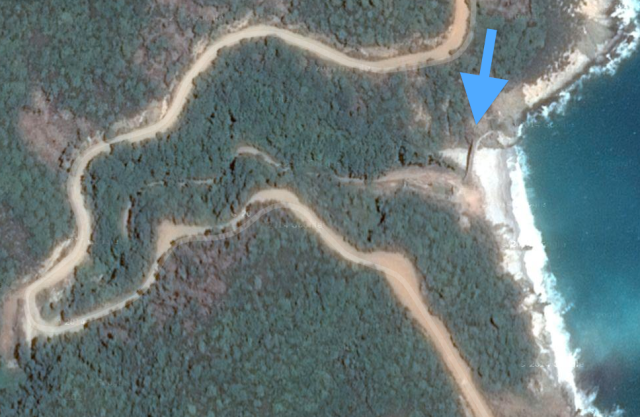 Google earth shows us the current situation of the Velas stream. The dirt road is on the left and the arrow points to the , I believe, only visual prove of the old coastal path: the bridge over the Velas stream. This bridge is all what is left of this beautiful path because it is likely that the dirtroad is following the track of the coast path and during construction of the road the path is destroyed.  Or does anybody know of the existence of other original sections of the path?

In 2007 I made this picture of the Velas bridge. 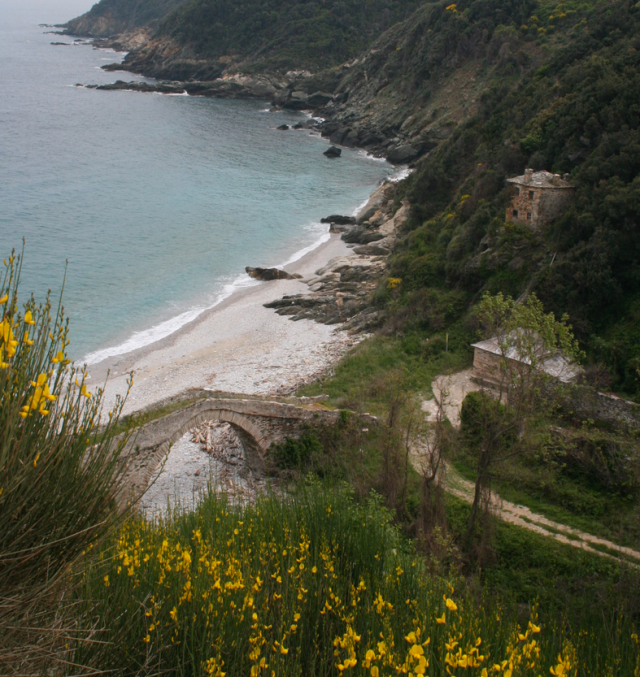 Some houses near the Velas bridge along the path to Lavra. 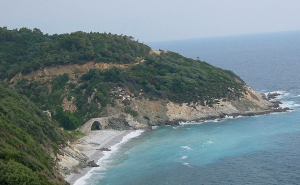 More recent photos from Panoramio by Koutoudis Grigoris and Ntinos of the Velas bridge, The main house is now in ruins and has no roof anymore. 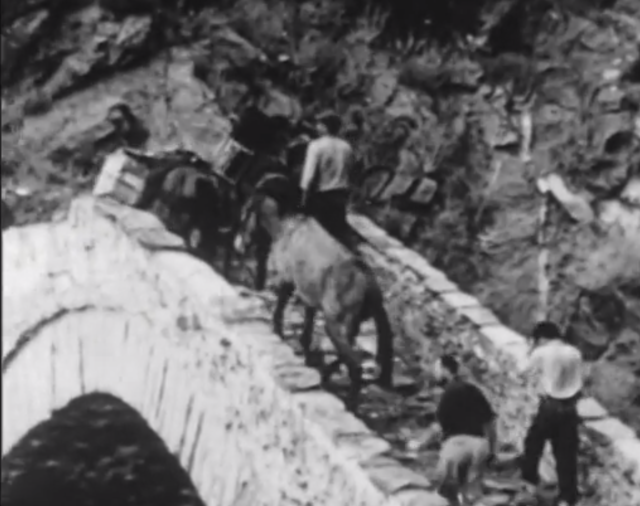 This still from the Pathe Millenium (see 1616) film made in 1963 is probably one of the few images were pilgrims are to be seen using the path in the direction of Lavra. Take a look at the next still from this short documentary: do you know were this is? It is the same company as in the previous image, so this image could also be shot on the historic footpaths to Lavra which disappeared. What do you think?

This entry was posted in 01 Lavra, walking and tagged bridge, footpath, monopati, Velas. Bookmark the permalink.

4 Responses to 1617- One remnant of the destroyed coast path between Iviron and Lavra: the Velas bridge