When we arrived at Mylapotamos after a long walk from Provata in 2013 we sat down and relaxed in the kiosk with probably the finest view of the holy mountain. 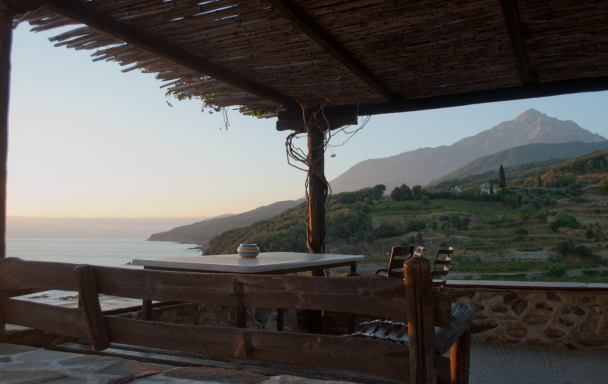 A plastic bag was hanging on one of the poles of the terrace. In the bag we found a chessboard and plastic pieces. That was an unsuspected surprise. It was the first encounter on Athos with the world of chess. I had not seen any references to chess before. Of course we couldn’t resist the temptation and Jacques and I played a game of chess. That drew the attention of several workers who were walking by. They had finished their work on the fields, in the wine cellers and the tsipourou factory. One of the boys challenged us to play a game. And because I happen to be the strongest player of our group of three, I was pushed forward to play. The opponent came from Georgia. Many of the workers come from different countries in the Caucasus or from Albania.

It became an interesting game. First I lost a pion due to lack of concentration. Then I started to think and to move my pieces forward. The boys on the other site of the board talked about candidate moves. They supported each other also in a physical sense.

Here we see the concentration, while pilgrim Jacques who is standing in the background is joking in Italian to an Albanian about Italian soccer teams.

In the middle game I could make a nice combination which won a quality (knight against castle) and an interesting position lay on the board. And while the sun disappeared behind the Holy Mountain I could weave a fine mate net. So Georgia –Holland: 0-1. But winning was not the most important part. That was sharing and experiencing a common challenge. A wonderful experience, thanks to a game that doesn’t need a language to be appreciated.

Bas Kamps, photo’s by hv, view on the mountain by bk.

This entry was posted in Mylopotamos. Bookmark the permalink.