Posted on January 8, 2014 by athosweblog

As told in the first post about this forgotten skete (1493) we could not enter the katholicon, because the workmen were not in possesion of the key. It gave me the opportunity to take some pictures in the exo-narthex. 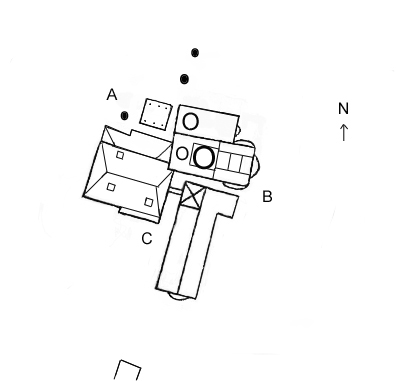 On this map the exo-narthex can found at B – the katholikon with the two domes – under the lesser dome. It is attached to building C, the guesthouse. The frescoes are of high quality, not refined, but painted by an artist who did not need many paint or brushstrokes to express himself. The overall condition of the frescoes is very poor. It looks like the frescoes in the church will be restored in the near future, because the whole church is filled up by scaffoldings. 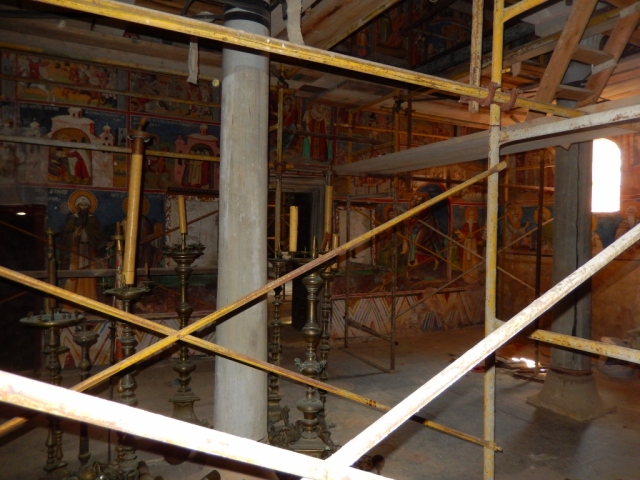 The first fresco I photographed is a scene with a Crusified Monk, with a soldier giving him a sponge with water. Death is coming from the grave and angels and demons surround the cross (read more here, thanks to our reader ‘deepblue’). 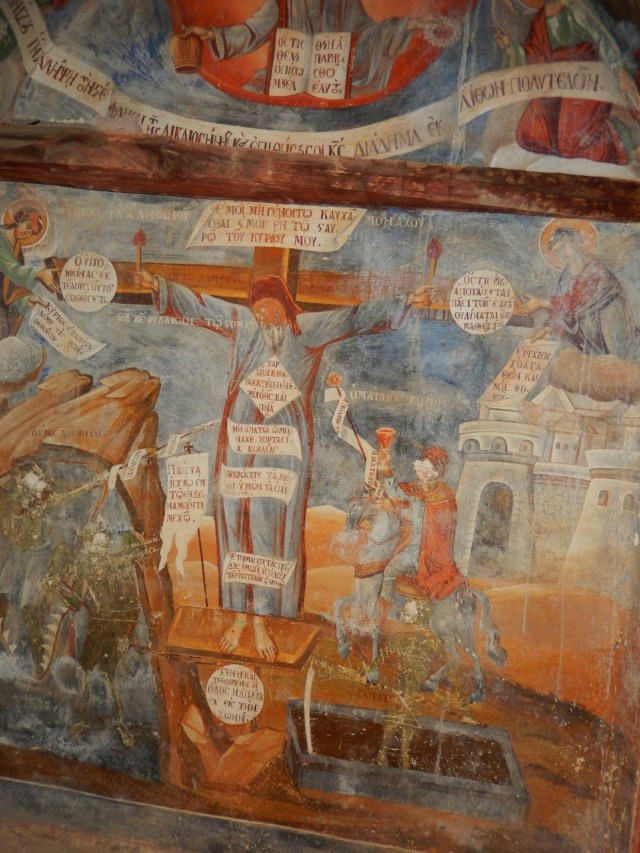 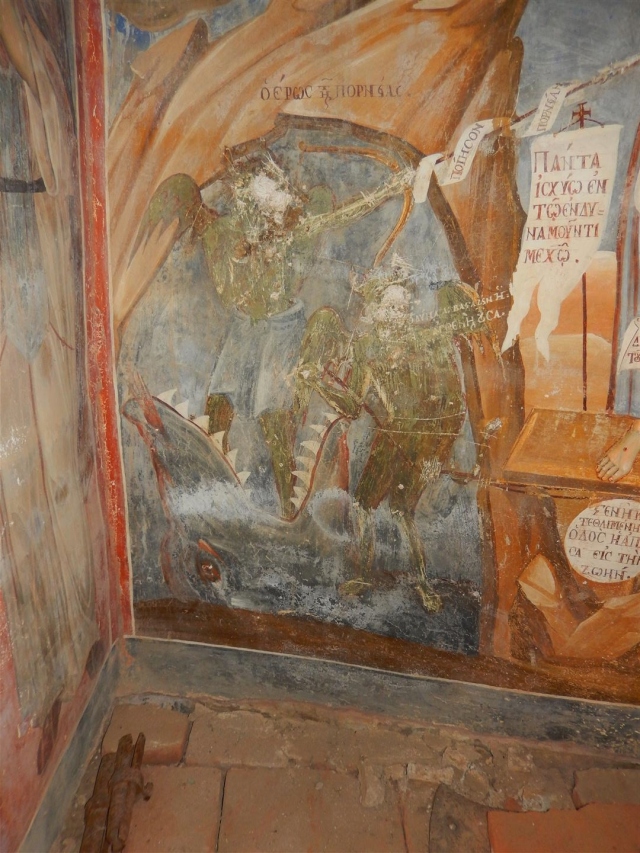 A badly damaged detail of the the fresco of winged devils, one of them with a bow, fall in the mouth of a monster (with Mount Athos in the background?). 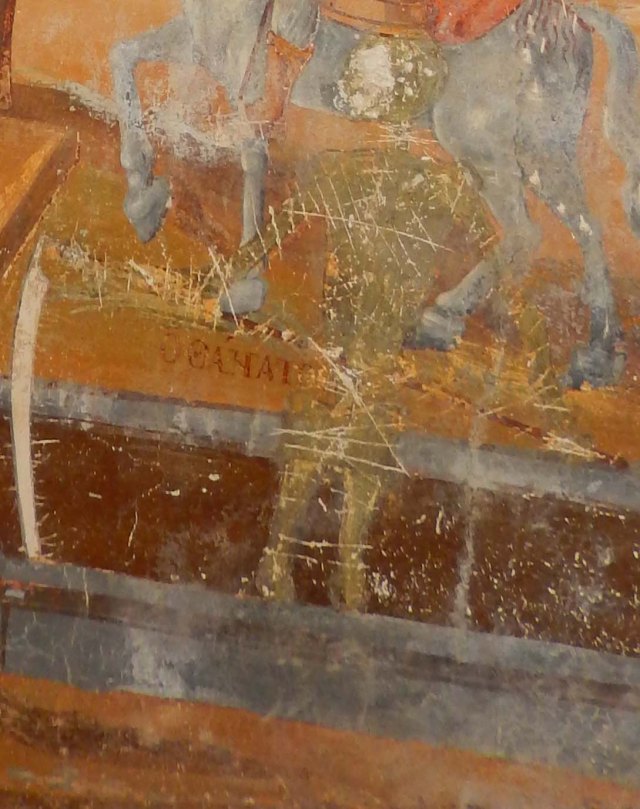 A detail of Thanatos – Death with his siskin. Like most frightfull figures on Athos-fresco’s, the body and head (especially the eyes) are badly damaged by pilgrims.

The next fresco in the first dome depitcs scenes from the life of Saint Anthony. 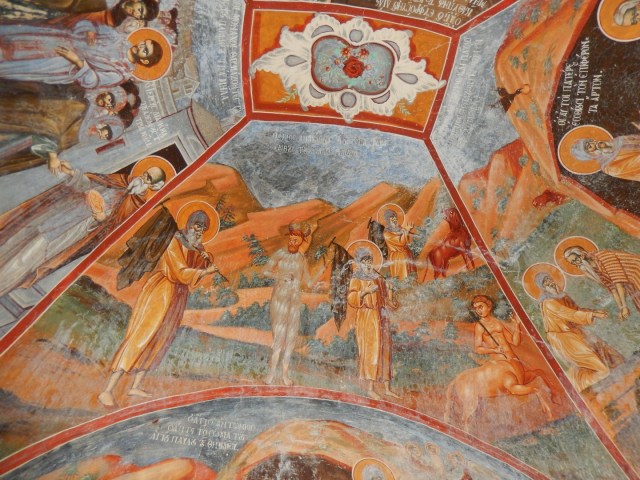 Saint Anthony lived in the desert and was tempted by many creatures: one of the temptations is done by the Satyr and the Centaur. Wikipedia says: “, St. Antony was stopped by these demons and he asked them, “Who are you?” To that the satyr replied, “I am a corpse, one of those whom the heathen call satyrs, and by whom they are snared into idolatry.” The satyr then tried to terrify the saint while the centaur acknowledged the overthrow of the gods. In the end, the centaur tried to show Saint Anthony the way to his destination while the satyr ended up asking for Saint Anthony’s blessing.” 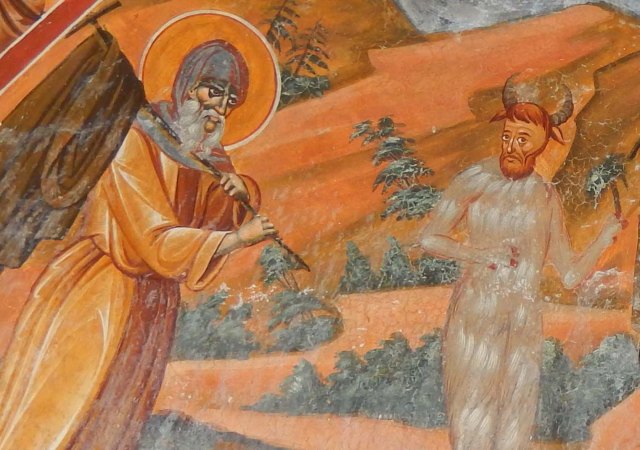 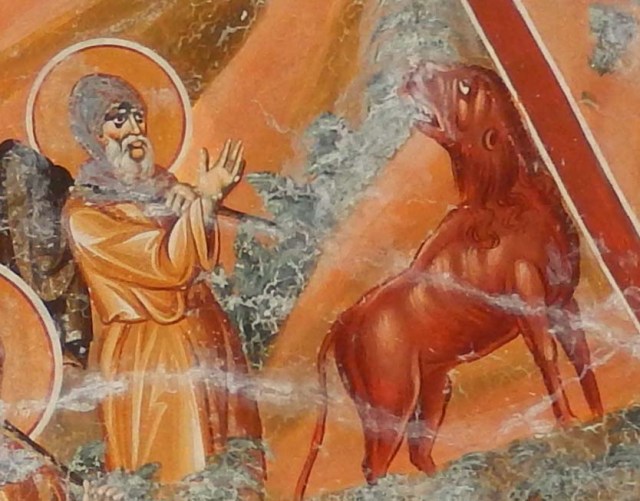 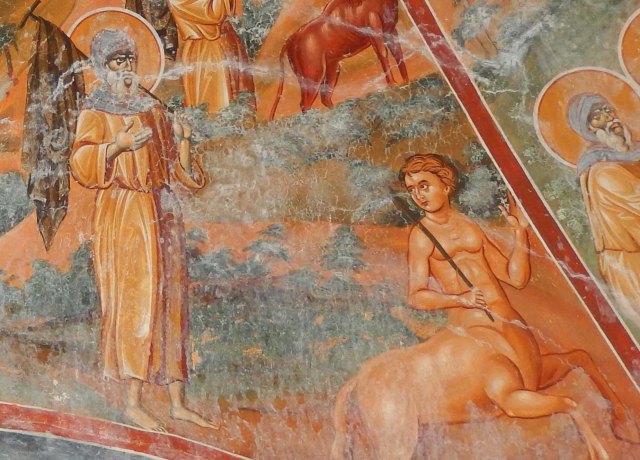 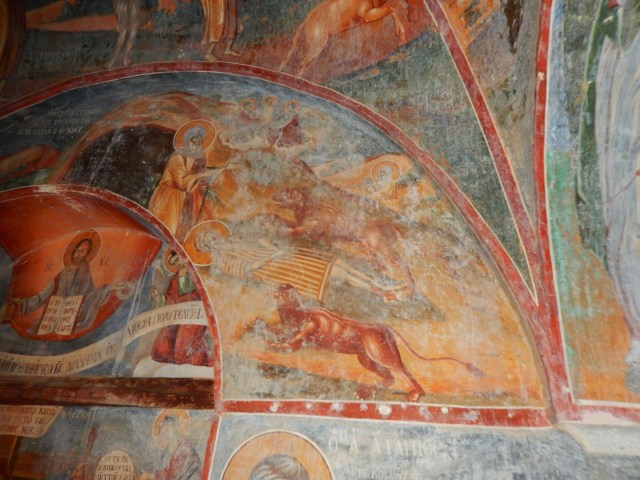 Here is St. Anthony is a cave. Wikipedia says about this temptation: “One time Saint Anthony tried hiding in a cave to escape the demons that plagued him. There were so many little demons in the cave though that Saint Anthony’s servant had to carry him out because they had beaten him to death. When the hermits were gathered to Saint Anthony’s corpse to mourn his death, Saint Anthony was revived. He demanded that his servants take him back to that cave where the demons had beaten him. When he got there he called out to the demons, and they came back as wild beasts to rip him to shreds. All of a sudden a bright light flashed, and the demons ran away. Saint Anthony knew that the light must have come from God.” 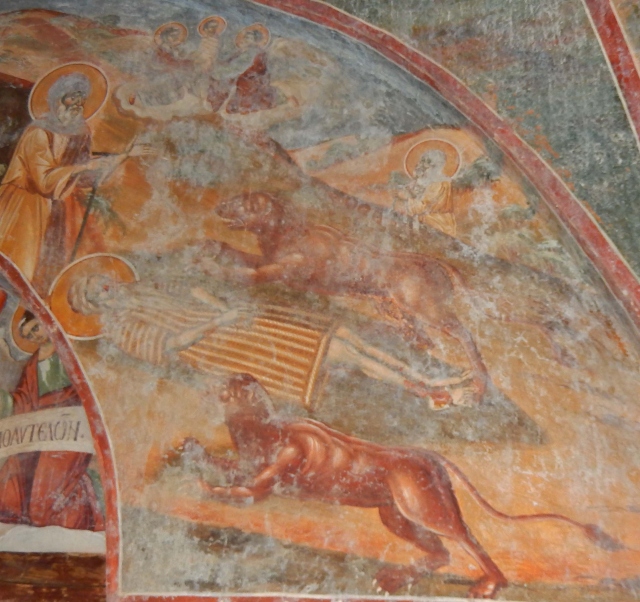 To finish this blog I’ll show you another scene of the live of Anthony, I think it must be the story about the temptation with a plate with silver coins, that the devil must have laid out in the desert to tempt him. 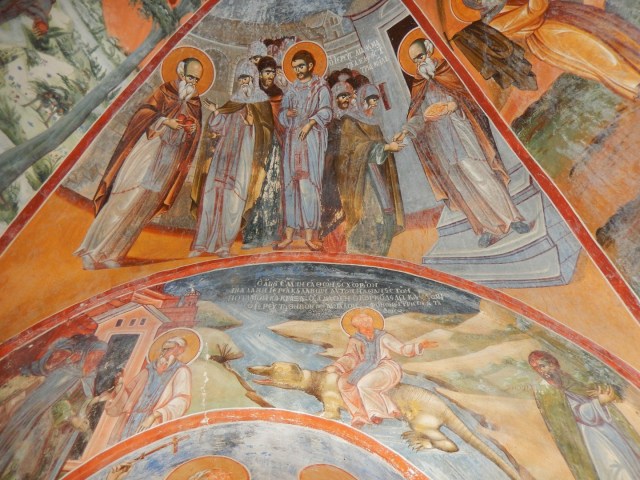 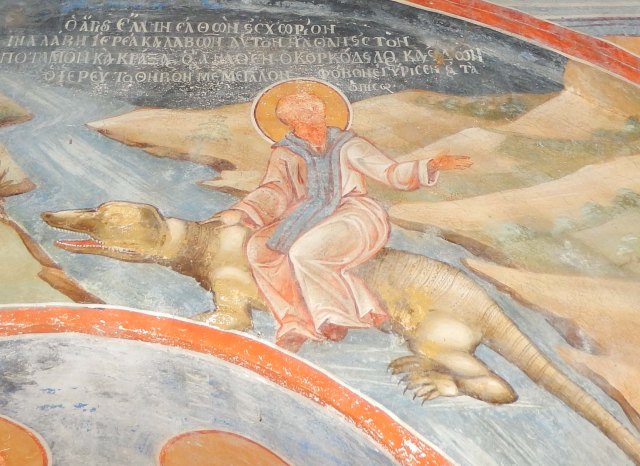 In the arch you can see a Saint (again Anthony?) sitting on an crocodile-like animal.

This entry was posted in art, Dimitriou, skiti, trip 2013 and tagged Frescoes. Bookmark the permalink.

1 Response to 1498 – Skiti Agiou Dimitriou: frescoes from the exonarthex