Skiti Agiou Dimitriou was until recently habited by monks (Speake in 2002) and the skete belongs to the Vatopedi monastery. Nowadays the skiti is deserted and nearly all of its 15 buildings are in ruin. According to Feigl “the skete once was the “backbone” of the Holy Mountain because of its high standard and its scientific and cultural educated monks. The Dimitrios church is so beautiful that it overclasses the Katholica of Vatopediou or Docheiariou….”.

Old picture from 1920-30 of the Skiti with a sketch of all 20 buildings : today the whole area is overgrown with the wild Athos vegetation.

In September 2013 I finally had the opportunity to pay a visit to this settlement. Two labourers were repearing the roof of large trapeza with expensive copper drains.

In this post I will describe a trip around the buildings of the main settlement, with the tower, the church, the trapeza and the adjacent buildings (nrs 1 – 5 on the sketch). Father Nectarios is the keeper of this church: we understood that the workmen had the key of the church: unfortunately this wasn’t the case, so we could not see the interior (which – by the way – is completely filled up with scaffoldings). 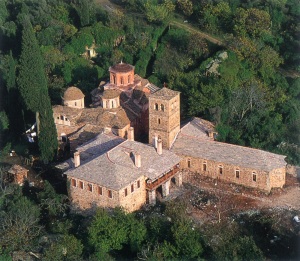 The path from Vatopedi to the skete ends at A, where you see this kiosk (Freatostegasma ? in Greek) with six columns, half in ruins, next to the three large cypresses (here three black spots). 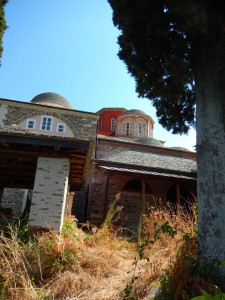 Behind the kiosk you can walk to the Exo-narthex, with its fine fresco’s, which I will show in a next blog.

We will continue to walk around the building/church towards spot B: 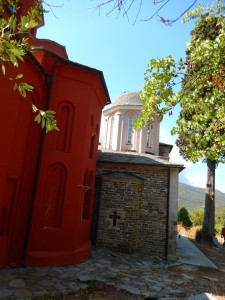 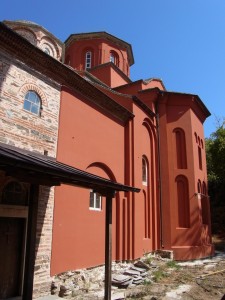 In the wall you can read the year 1796. The church is build in the 12 th century and renewed in 1755. According to Feigl the oldest farmhouse of Athos is situated in this skiti, with a 1000-year old chapel! I could not find this farmhouse in situ: here are two pictures from the Feigl book.

While standing on spot B and looking to the tower you see this:

The trapeza of Skiti Dimitriou: the roof is almost renewed. Inside all walls are removed and the floor is broken open. No fresco’s or paintings were seen.

A stair between building C and the tower

The guesthouse near spot C: in a next blog I will show you the interior.

The other buildings in de neighbourhood were totally in ruin: 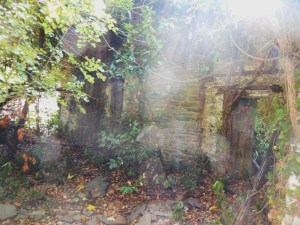 Wim, 29/12 (athos weblog proudly presents this first detailed publication about the skete [with pictures of Jitze Bakker], next time more about the fresco’s in the exo-nartex)

This entry was posted in Dimitriou, skiti, trip 2013 and tagged Skiti Agiou Dimitriou. Bookmark the permalink.