Posted on September 9, 2013 by athosweblog

This substantial three-part work, published in 2000, provides a topographical, architectural and photographic record and survey of each Byzantine and Orthodox monastery on Mount Athos in Greece. The results of the long-term project are published in three fascicules. The first book introduces the project and each of the twenty monastic foundations. The photographic record, in full colour, is presented in the second fascicule, called “photocraphic documentation of  landscapes and monasteries”. Over thirty flights were made by helicopter between 1965 and 1989 to shoot the areal pictures. The final part comprises the Atlas itself, publishing maps of the Peninsula of Athos and topographical plates which present elevations and plans of these important buildings. The first fascicule is in English, the second is in Greek, German, English and Russian.

The three books are for sale on the internet or in antique bookshops for appr. € 195,00.

Mylonas found some interesting paintings and pictures of the Russian Panteleimon monastery or Roussikon, Paleomonasterio and Chromitsa, which I will show here:

Areal picture from 1986, many buildings were destroyed by fires, others – on the left – are still largely intact

1835 (?): the small church and the buildings on the right are the remains of the Monydrion (Small monastery), that disappeared later. In the left one can see the old bell-tower, the old trapeza and the wing from 1817.

From the trapeza of Panteleimonos: the painting was probably based on a photograph from Sevastinov’s archive,whose expedition visited Athos in 1859-1860.

Lithograph of Panteleimon, without the expansion that formed the existing east courtyard and ist surrounding buildings from 1862. 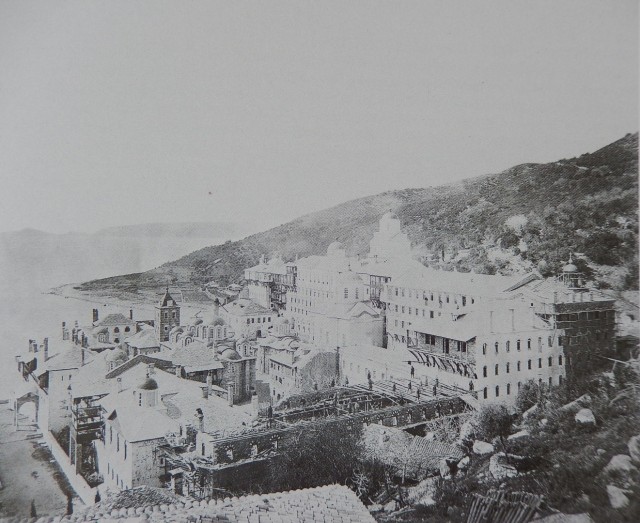 Panteleimon picture 1871, the roof of the eastern building is under construction. The oldest accurately dated photograph of Mount Athos (?). 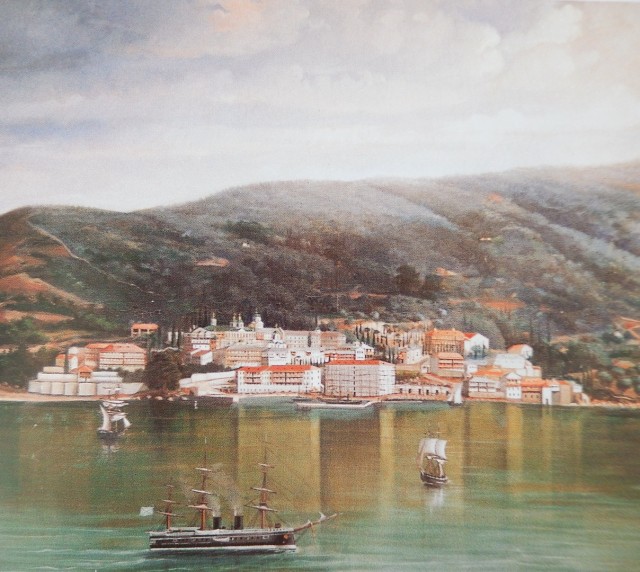 Oil painting form the guesthouse of Officials from 1886, probably based on a photgraph 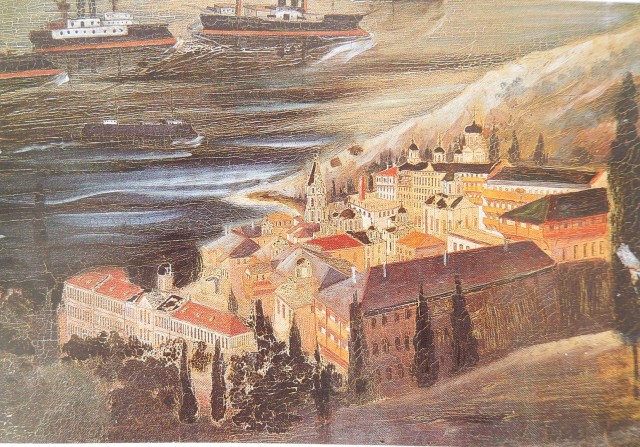 Oil painting, also from the guesthouse for Officials, 1895-1908, with the large coastal Korda of 1895 and Library without the top storey of 1908

This entry was posted in 19 Panteleimonos, art, books, Chromitsa, ruins and tagged russians. Bookmark the permalink.