1407 – Panteleimonos: more about the unknown church ‘U’

In post 923 I showed you some pictures of the ruined buildings that can be found behind the Panteleimonos monastery. One of these buildings, a church, was kept well and it looked recently renovated, but I had no futher information about it. Here you see it in the top-right corner. 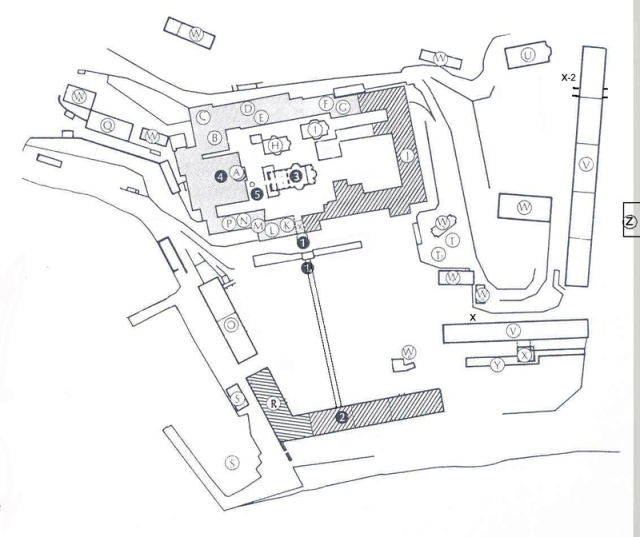 One of our readers, Hans Overduin from Holland, visited Athos a couple of times and last year, when he came to the same spot and saw the same church, he wondered what church it was and he tried to find out more about it. 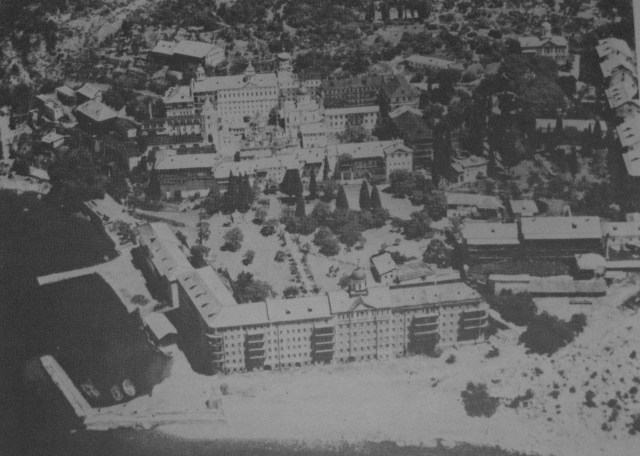 Feigl: a areal of Panteleimonos, with the chruch ‘U’ in the right/top corner.

This is what Hans shares with us: First of all he bought a book in Russian in the (large!) shop in Panteleimonos about the monastery with a map in it, where the church was shown.

Together with information from the book from Sotiris Kadas and standard works of Mylonas (and the help of Russian speaking teacher at his sons school), he could determine that the church was build in 1898 and that it was dedicated to the ‘Four Hierarchs of Moscow’. It was renovated a decade ago. 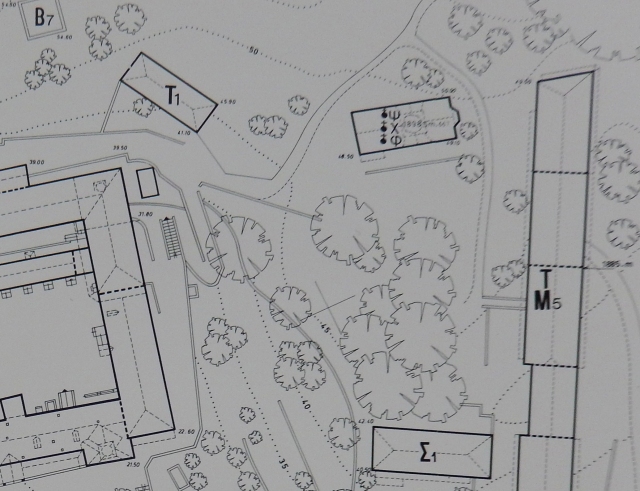 Mylonas shows us a date: 1898, and you see these Greek letters:

χ = Chapel (?) of the Holy Archangles

φ = the church of the ‘Four Hierarchs of Moscow’

According to Mylonas there must be a another chapel in the church and also an ossuary. 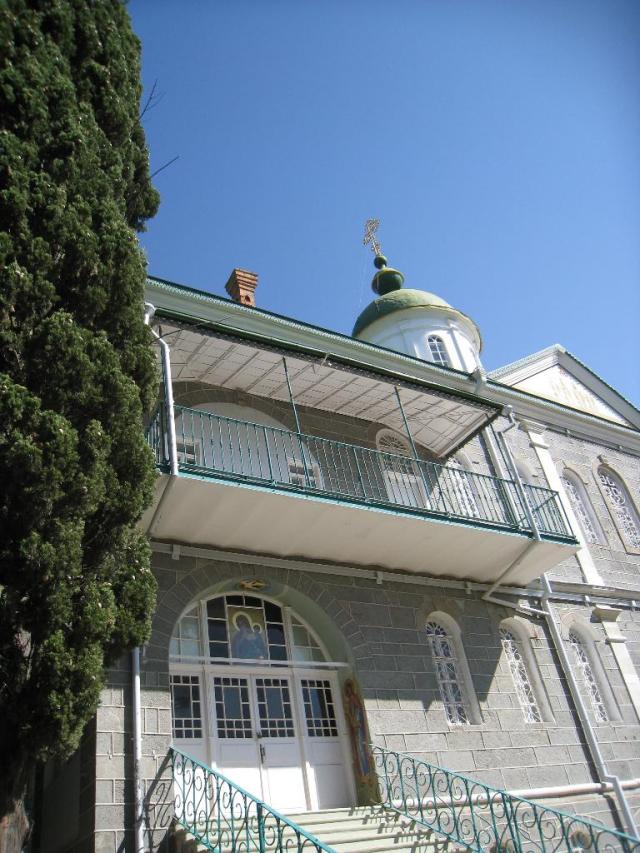 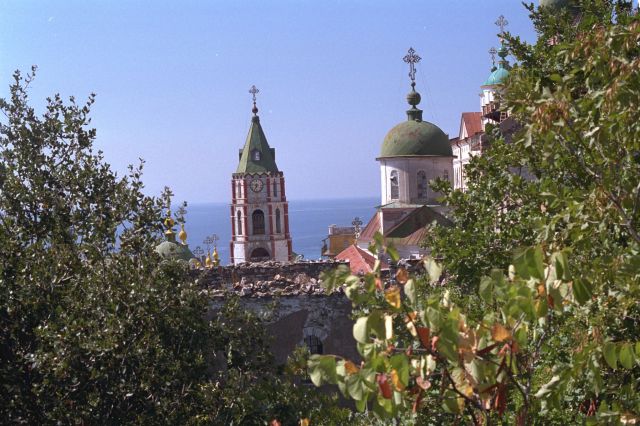 In 1913 and 2005 eight metropolitans were added to list, but at that time the church was already build (1898) and the name of the church did not change. The celebration day is the fifth of October.

“By celebrating these hierarchs on a common day, the Church offers each of them equal honor, as heavenly protectors of the city of Moscow and prayerful intercessors for Russia”, thus the English Wikipedia.

The naming of the church fits perfect in the triumphalism and nationalism of the Russians on Athos the end of the 19th century. 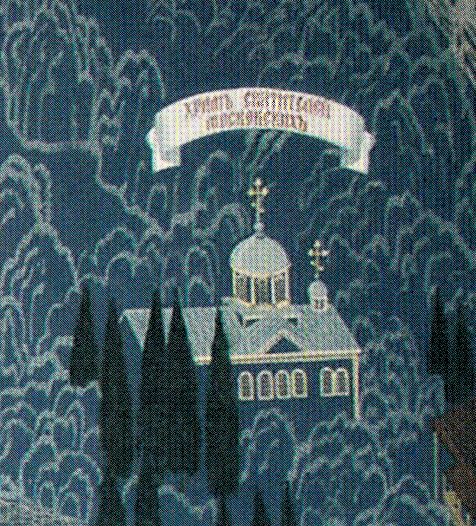 Why the church was built is actually not (yet) known to us. One argument could be the vast numbers of Russian pilgrims that visited Athos that time.

It is not a coincidence that the largest church on the Balkan at the Serail was build in 1900 and that  in close vicinity of those two churches a church was build in the Paleo Monasterio, presumably in the same period. 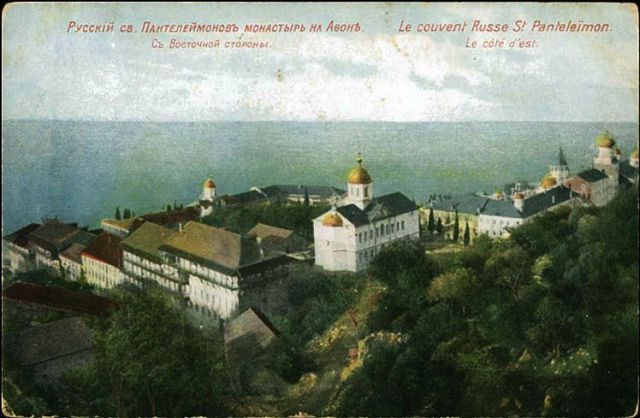 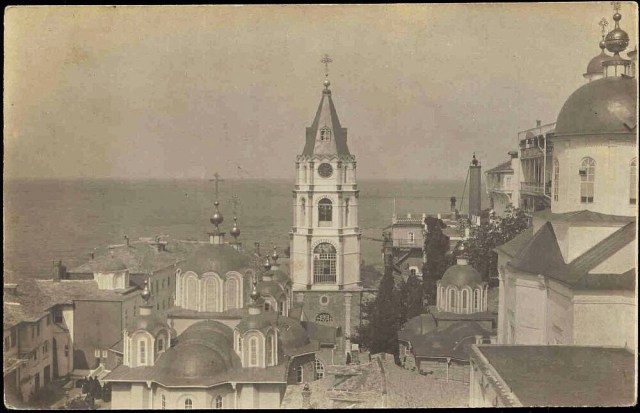 Who will be the first to show us pictures from the interior? 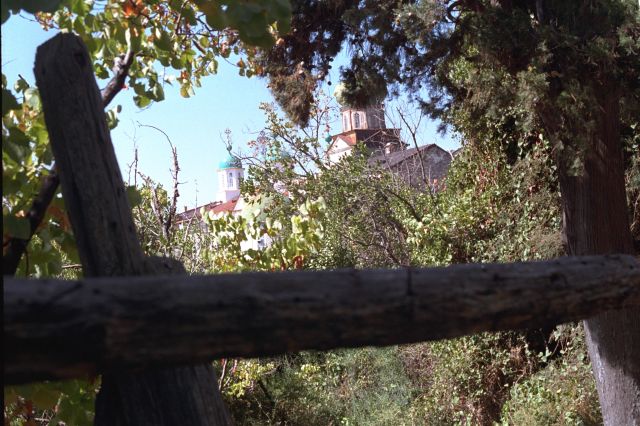 By coincidance the Patriarch of Moskow, Kirill, is visiting Greece this very moment. He also will visit Mount Athos. He quoted that the Russians do not have the intention to expant their influence on Athos, but he did plee to the Patriarch of Constantinopel Bartholomeus, who has jurisdiction over Athos, to allow more Russian monks to go to Athos. Wim Voogd, thanks to Hans Overduin, 1/6

This entry was posted in 19 Panteleimonos and tagged church, discovery, russians. Bookmark the permalink.

2 Responses to 1407 – Panteleimonos: more about the unknown church ‘U’