Although it was almost getting dark I continued my hike towards the last house standing on the cliffs of Athos. 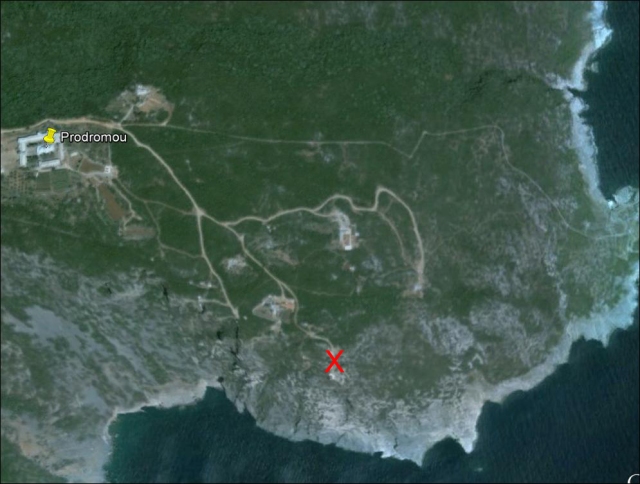 The Akrathos area with the last house at spot X. 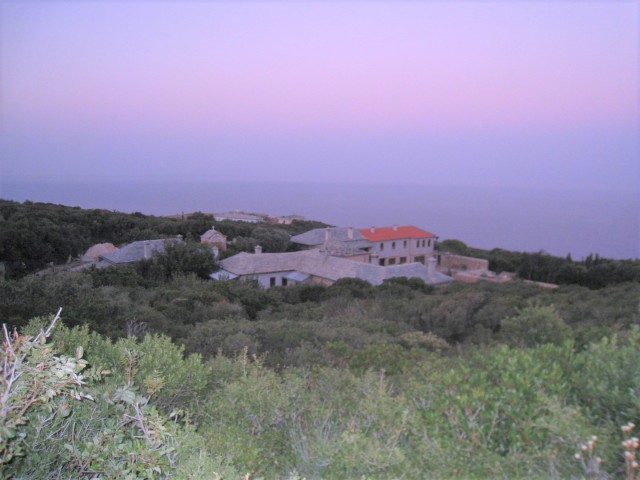 Several large settlements are nearby: more information about them is not known to me

This spot is not only famous because of its magnificant location, but also because of a YouTube movie, which we showed you already in post nr 243(5 years ago in November 2007). Phantom fighter jets of the Greek armed forces fly close by the cliffs and monks wave their flags!

The last house on Mount Athos with the Greek and Byzantium flags: the white hut in front of it is a new hermit dwelling 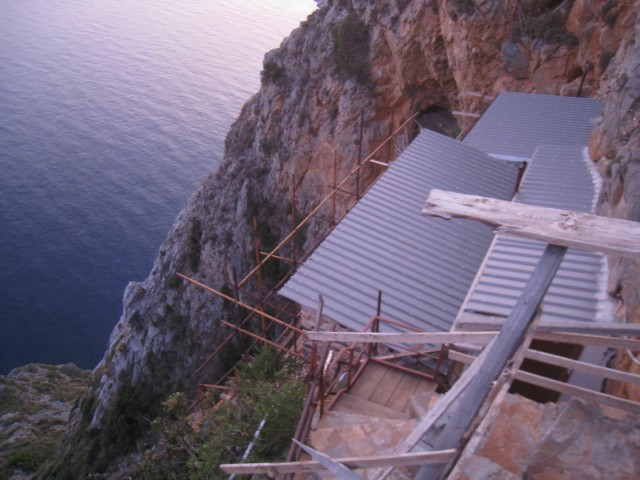 The church and to its left the entrance to the house

I was welcomed by a very friendly monk called Iosif, who invited me in and acknowlegded that he was the one of the YouTube film.

A painting was made of this event, which hangs in his guestroom. The pilot became a good friend of monk Iosef and he visited his house a couple of times.

The monk explained to me that he was very peacefull man and he didn’t like war, but he was just a nationalistic Greek. He asked me to take a picture of this poem:

to a Land of Peace

seeks for, is given and brings with him

to the ends of the world”.

After his retirement the pilot gave his suit as a gift to monk Iosif,

together with his helmet, a scale model of the Phantom plane and other pilot stuff. Living on the cliffs at the end of the world was harsh, Iosif said. In summer dry and and warm, in the winter cold and windy (upto 11 Beaufort sometimes!).

The chapel is new decorated: here work in progress at the ceiling, with a extraordinary mosaic of the Pantocrator.

Iosif also proudly showed me his new mosaic floor, with delfins and a fine symbolic figure, with colors representing the different people of the world (and with Greeks in the centre – white color).

Time was running out: I had rush to be back in Prodromou in time!

A last view on the hermit houses and the mountain: day 3 came to an end.

This entry was posted in people, trip 2011: Wim's group and tagged airplane, Akrathos. Bookmark the permalink.